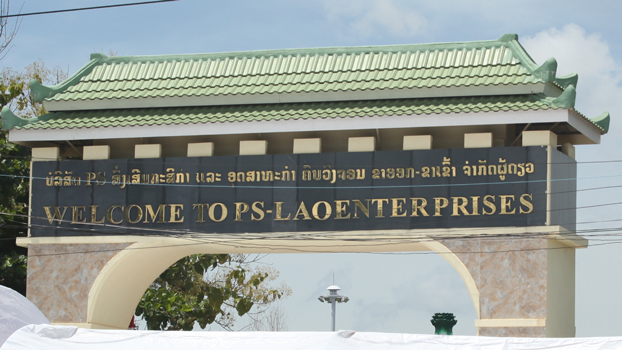 The gateway of the PS Company, which defrauded thousands of Lao investors, is shown in the capital Vientiane in a 2019 photo.
RFA

More than 200,000 Laotians defrauded in a pyramid scheme are still waiting to be repaid three years after the company’s owners were jailed amid rare public protests by angry investors demanding their money back, sources say.

The owners, Por Her and Souknaly Thepsimuang, co-presidents of the PS Agriculture and Industry Promotion Import-Export Company of Laos, were convicted of a wide range of charges including fraud and money laundering. They received lengthy sentences, later reduced to 15 years.

The two were detained in September 2017 after investors launched protests at the company’s headquarters in Vientiane. But even though arrests were made, sentences handed down and assets reportedly seized, investors who lost thousands of dollars in personal savings have not yet seen a cent returned.

And though the pair are in prison, Lao authorities are still assessing the extent of their personal assets and wealth, a police officer in the capital Vientiane told RFA’s Lao Service this week.

“A committee has been set up to pursue the case in court, and the court will determine how much money each investor will get back,” the officer said, speaking on condition of anonymity. “So the investors will have to wait for the court’s decision.”

News three years ago that PS Agriculture had ceased providing promised interest payments led over a two-day period in September 2017 to protests by hundreds of angry investors who turned up at company offices.

The firm had registered as an agricultural company in 2012 to produce purified drinking water and noodles, run a rice mill, and farm organic chickens and vegetables.

Sources said in earlier reports that investors were at least partially to blame for pursuing what they saw as a get-rich-quick scheme without fully researching how the company’s expansion fund operated, and that many had decided to contribute to the fund based on the advice of friends.

Several defrauded investors, among the 30,000 who filed statements of loss to the police more than two years ago, voiced disappointment over the continuing delay, speaking with RFA this week.

“We’re still waiting for the court’s decision and our compensation,” the source said, also speaking on condition he not be named. “We followed up with the courts, but when we went to this court, they told us to go to that court.”

“Why is this taking so long?” he asked.

“My total investment was 10 million kip [U.S. $1,100], but I’ve received nothing so far—no dividends and nothing back from my capital,” another victim in Vientiane said. “I look at Facebook but never see any news.”

“I’ve lost all hope of getting my money back,” he said. “I don’t know what the upper-level authorities have been doing.”

Meanwhile, disappointed investors in Bokeo province said that authorities responsible for the case have kept them in the dark about their prospects for repayment. “We haven’t heard anything since we filled out the forms declaring our losses to the police,” one said, with another adding, “Right now, we don’t expect to get any money back at all.”

Also speaking to RFA, a member of the inspections department at the Prime Minister’s Office said, “We have received a lot of complaints about the delay of the repayment. We have authorized a Specific Task Committee to address the complaints and find a solution.”

“So far, we haven’t received a report from the committee, though,” he said.

Lao Prime Minister Thongloun Sisoulith has vowed to tackle corruption in the country since coming to power in 2016, but the government has made little headway with the problem, which is widespread due to weak laws and lack of enforcement by authorities.

The U.S.-based political rights monitor Freedom House, which rates Laos “not free” with a score 14 out of 100, said in its report for 2019 that “the courts are wracked by corruption and subject to Lao People’s Revolutionary Party influence.”

I hope you all will get some of your hard earn money you invested in back. I'm don't the cause of investigation delay in this case but the authority are surely quick in investigate, arrest and jailed any one that made comments, criticizing or questioning the authority of wrong doing, miss management or have different opinions regarding governing ideology.

My wife, with her two sisters, were duped into investing $5,000.00 in this organization. I still have videos and photos of our visit there. Impressive site. My sister-in-law in Vientiane filed the necessary paperwork hoping to receive something back. So far, nothing, not even any communication. Don't expect to get anything because gov't probably as corrupt as PS Ent.