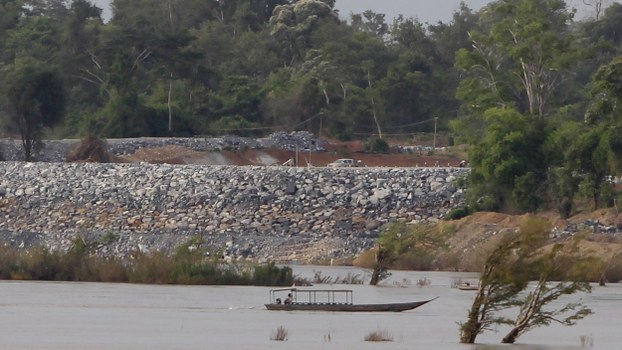 In this June 20, 2016 file photo, a fishing boat passes near a construction site of the Don Sahong dam, near Cambodia-Laos borders, in Preah Romkel village, Stung Treng province, northeast of Phnom Penh, Cambodia.

Villagers near Don Sahong Dam, a major dam on the Mekong River in Laos, have reported smaller fish catches as it nears completion.

The dam, slated to conduct its final testing phase by early next month, will be operational by the end of the year.

Don Sahong is one of five planned Lao dams on the Mekong’s main stream, integral to Laos’ strategy of becoming Southeast Asia’s power-exporting “battery,” but many fear that Vientiane’s ambitious plan will have devastating environmental and social impacts.

“The Don Sahong Dam closed its gates to hold back water for power generation,” said a fisherman from Don Chom village in Champassak province’s Khong district, located downstream from the dam.

“That’s why there are no more fish now. It is too dry. It’s very difficult to catch fish right now. So the whole village stopped fishing and we are doing something else [to try to make a living,] the fisherman said.

The fisherman added that before construction of the dam, fishermen in his village and others nearby were each able to catch more than 20 kilograms (about 44 pounds) of fish per day. The catch even included large catfish and would fetch about $25 per day at the local market.

After construction began, the catch became gradually smaller, and these days they can only catch 3-5 kilograms (about 6-11 pounds) per day. Since the dam closed its gates it has gotten even worse. Some days they come home empty-handed, he said.

Residents of nearby villages told RFA that they are also experiencing the same decline.

“In this village, before the dam, we could catch a lot of fish, but now we catch fewer and fewer over the past five years,” said the chief of Hang Sadam, another downstream village.

“This year is the worst. There are no more fish. We can’t even fish [enough] for our own consumption,” he said.

“We are going to have to change our way of making a living from fishing to something else like growing vegetables or raising livestock. The fish have all disappeared. The large catfish is now extinct,” said the chief.

He added that many of the village’s residents have resorted to relocating to big cities or even to Thailand to work as laborers because there are no other options for them.

An official of the fishery and livestock department of Champassak province said the smaller catches are a result of this year’s prolonged drought.

The entire Mekong region experienced a drought that lasted well into what should have been rainy season, caused partly by this year’s El Niño.

“Don Sahong dam is testing. Sometimes it’s closed and sometimes it’s open, but the dam is not related [to a decline in fish stocks]. The drought is,” the official said.

“We have less water flowing from the north and all the rivers, including the Mekong River are drying up. That’s why it’s’ so dry down here.

In July, RFA’s Vietnamese Service interviewed the Stimson Center’s Brian Eyler, an expert on transboundary issues in the Mekong region, who said that the drought was in fact caused by El Niño and climate change, but it was also exacerbated by upstream dams in China and Laos.

An official of Khong district told RFA’s Lao Service in April that he petitioned the provincial government to find alternative means of support for villagers in his district.

“The villagers can’t fish right now. The project should have an alternative, or another way for them to make a living. I’ve asked the province many times about this, but nothing has happened,” the official said.

In August, a young man from Khong district who left to work in Bangkok said he decided to leave for greener pastures.

“There’s no factory in our village. There are no more fish and wages are too low. Many villagers decided to come to Thailand for higher wages,” he said.

A labor official from Khong district said that two years ago about 3000 people from the district were working in Thailand. That figure is now up to 7000.

A resident of the district’s Don Khone village said it was no mystery why so many former fishermen were looking to Thailand these days.

“We can’t fish for fish at home, so we go fishing for cash on the other side of the Mekong river.”