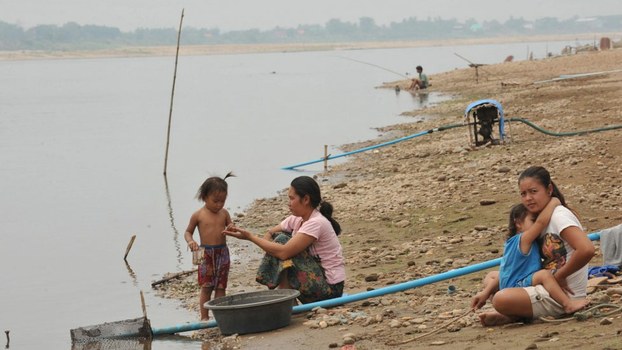 Women and children sit on the bank of the drought-hit Mekong River nearthe Lao capital Vientiane, in file photo.

China compounded a drought that devastated fishing and farming communities on the Mekong River last year by restricting the flow of huge amounts of water downstream from 11 of its dams, a U.S. research firm said in a study released Monday.

“They didn’t directly cause the drought, but they compounded it,” Basist said, referring to the Chinese dams.

Basist co-wrote the U.S. government-funded study, which used satellite data during a 28-year period to come up with a calculation that Chinese dams had held back “a huge volume of water.”

“The satellite observations provide measurements of surface wetness, which can be directly translated into river flow,” Basist said.

“The satellites showed … basically, 2019 was an extreme event of restriction of flow from the upper basin,” he said. “It’s being restricted by the 11 dams in China.”

The Mekong, the world’s 12th-longest river, stretches through six nations before draining into the South China Sea. Its waters flow from China past Myanmar, Laos, Thailand, Cambodia and Vietnam, affecting more than 60 million people who depend on the Mekong and its tributaries for food, transport and water.

Basist emphasized that there was a major drought occurring in the lower basin, which mainly caused parts of the river to dry up, leaving cracked riverbeds even during a rainy season when fishing should have been plentiful. Reports said the Lower Mekong’s water level last year was its lowest during the past 50 years.

“The primary cause was from a severe drought in the Lower Mekong. The lack of water from China only amplified the drought,” he said.

The study did not examine the flow of water downstream, including in Laos where two new dams were also opened late last year.

“Despite this, China has continued to do its utmost to guarantee reasonable discharge volumes” to countries downstream, the ministry said in a statement to Reuters news service.

In early 2020, the Mekong River Commission (MRC), an inter-governmental agency that works with regional governments to manage the river’s resources, warned that water outflows could potentially drop as Beijing said it was testing equipment at one of its 11 dams on the Upper Mekong.

During a meeting with his Southeast Asian counterparts in February, Chinese Foreign Minister Wang Yi said Chinese dams on the Mekong – which China calls the Lancang – would release water, and Beijing would consider sharing hydrology information to assist its neighbors in the future.

Wang made the remarks in response to criticism that rampant damming on the Mekong would transform the economies of the five other countries downstream and contribute to long-term inflation and dependence on China.

Critics and NGOs fault China’s dams on the Mekong for contributing to the drought that severely damaged agriculture and fisheries in its neighboring nations. But Wang said the drought was mostly caused by a lack of rain and pointed out that China had also suffered economic losses.

“China has overcome its own difficulty and increased water outflow from the Lancang River to help Mekong countries mitigate the drought,” Wang told the meeting.