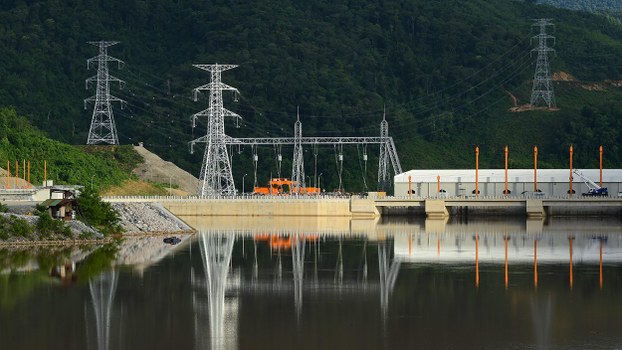 This undated handout from CK Power released on October 29, 2019 shows the Xayaburi dam, located in the lower Mekong river in Laos.

The Xayaburi dam, the first of five planned large Mekong river mainstream dams in Laos, officially began operations Tuesday, setting in motion the first major cog in the country’s ambitious but controversial plan to become the “battery of Southeast Asia.”

The dam, which began construction in 2012, had been a focal point of criticism from both environmentalists and human rights activists.

They say that the electricity that the dam and others like it will produce for export to neighboring countries is not worth the serious ecological and human impacts of altering the natural flow of the Mekong river.

The Thai-owned project was built at a cost of $4.47 billion.

According to an AFP report published Tuesday, developers touted the dam as a “fish friendly power plant,” and an example of renewable energy.

The same report said drone footage taken Monday in Thailand showed that downstream from Xayaburi, water levels were alarmingly low, with large parts of the dry riverbed exposed, as a result of the river’s recently completed testing phase.

A group of activists living on the banks of the river in Thailand protested one day before the dam became operational.

The members of the Thai People’s Network in Eight Mekong Provinces came together in Thailand’s Loei province, downstream from the Xayaburi dam in a show of opposition to Xayaburi and the other planned dams.

“Can you stop building dams?” a representative of the network shouted at the gathering.

“Look at the impact created by [just the] Xayaburi dam! In less than a month, will the Mekong water level drop or not?” the representative added.

“Please do some impact assessment on this change! Listen to us before building another dam,” the representative urged.

Another member of the network told RFA’s Lao Service that the plan to disrupt the environment and lifestyles to sell electricity was foolhardy.

“If Laos continues to build dams only for the sake of selling power, a lot of problems will follow,” said the source.

“This is about food. This is about life or death. It would be better to suspend or cancel all the dams and seek other alternatives to produce electricity,” the source added.

Several members of NGOs were also present at the protest in solidarity against the Lao government’s dam plans.

Laos has built dozens of hydropower dams on the Mekong and its tributaries and is preparing to build scores more dams in the years ahead.