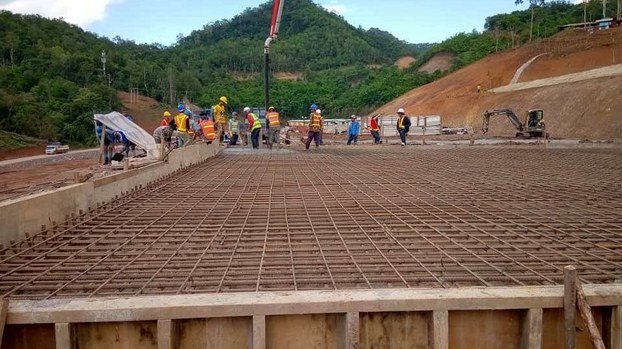 This 2020 file photo shows an access road to the future site of the Luangprabang dam under construction in Luang Prabang province, Laos.

Construction of the controversial Luang Prabang Dam on the Mekong River, near the ancient Lao capital of the same name, is making rapid headway, according to Lao energy officials.

Access roads, including a 14-kilometer spur to the dam from a nearby highway and a road that circles the site, are nearly 60 percent complete, a new ferry port was recently finished, and a workers’ camp and bridge spanning the Mekong are well underway.

An expected 581 families will be displaced by the 1,460-megawatt hydropower project and villagers have voiced concerns that they will be inadequately compensated for relocating.

“The villagers need fair compensation for their land that will be flooded by the dam project,” said one resident of nearby Chompet district.

“We are also worried that we will not receive land to farm at the new location.”

The Thai developer clearing land for the project is permitted to proceed with limited construction despite having yet to sign a hydropower sale pact required for approval, based on guidelines established by the Mekong River Commission (MRC).

Critics say the ongoing development shows that the intergovernmental group—which grants Thailand, Laos, Cambodia and Vietnam the right to review dam projects for cross-border impacts—is being treated as a mere formality by Vientiane and its Thai partners.

Laos has built dozens of hydropower dams on the Mekong and its tributaries, with ultimate plans for about scores more hoping to export the electricity they generate to other countries in the region, under an ambitious goal to be the “Battery of Asia.

Though the Lao government sees power generation as a way to boost the country’s economy, the projects are controversial because of their environmental impact, displacement of villagers without adequate compensation, and questionable financial and power demand arrangements.