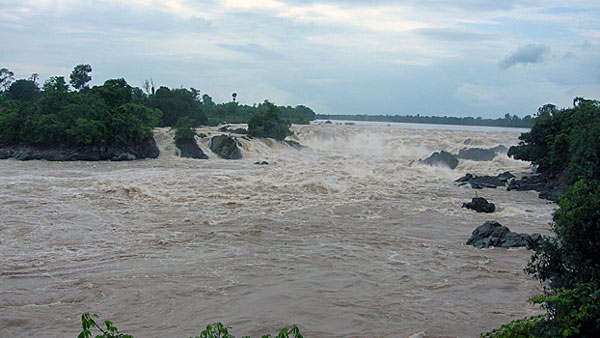 Khone Phapheng Falls, a series of cascading waterfalls on the Mekong River in Khong district of southwestern Laos' Champasak province, is one of the sountry's most beautiful natural attractions.
RFA

Nearly 150 families in six villages in Khong district of southwestern Laos’ Champasak province say they do not want to give up their homes and land to a special economic zone planned for their area and that they fear that project developers will not compensate them fairly.

The first phase of the Mahanathy Siphandone special economic zone (SEZ) is expected to be built by 2021 and will cover nearly 200 hectares (494 acres) of land throughout the six villages. The project will be expanded to cover nearly 10,000 (24,710 acres) hectares of land in the province.

During the first phase of construction, 35 five-star hotels and casinos will be built at a cost of more than U.S. $9 billion. The Laos Mahanathy Siphandone (Hong Kong) Investment Co. Ltd., also known as Laos Maha Nathi Sithandone (Hong Kong) Investment Co. Ltd., received a 99-year concession for the land on which the SEZ will sit, is providing 80 percent of the funding, while the Lao government is supplying the rest.

The company and the Lao government signed a memorandum of understanding on June 20, 2017, for the first phase of construction, according to project documents.

Residents of Hinsiew, Seantai, Seanneua, Vernkhao, Kamaochampa, and Hangkhone villages in Khong district, told RFA that they are concerned that their lifestyles will change and developers will not compensate them at fair cost when they are forced to leave their homes.

“We are afraid that the project will take over fuel stations, shops, and venues where villagers earn a living,” said a villager who requested anonymity. “If the project [developers] don’t compensate us for the loss of our property, houses, and rice fields at fair cost, we will not be satisfied, and then we will not want to leave.”

Though the state grants Laotians the right to occupy land, and some can sell the right to use their land if their family has inhabited it for generations, citizens cannot officially own property. The government reserves the right to reclaim land when this is deemed to be in the public interest, such as for national development projects.

Under Lao Decree 84 issued in April 2016, Lao citizens who lose land to development projects must be compensated for lost income, property, crops, and plants. Project owners must guarantee that living conditions for those displaced will be as good as, or better than, they were before the project began.

Still, the villager questioned whether SEZ project officials would pay residents the full amount for what their homes, land, and property are truly worth.

“The project will take care of the affected villagers by providing houses, but it’s a matter of whether or not they will agree to it because they are used to earning a living by fishing and cultivating rice,” he said. “They will be satisfied if the compensation is fair and can cover their daily expenses.”

“But the villagers are afraid they will be treated like people from northern Laos who were removed from special economic zones without fair compensation,” he said.

Some families living on land allocated for the 1,150-hectacre (2,840-acre) Saysettha Development Zone, established in Vientiane under a joint project between the governments of Laos and China, still had not received compensation for land and property they had lost seven years after the project began, according to a Vientiane Times report in 2017. 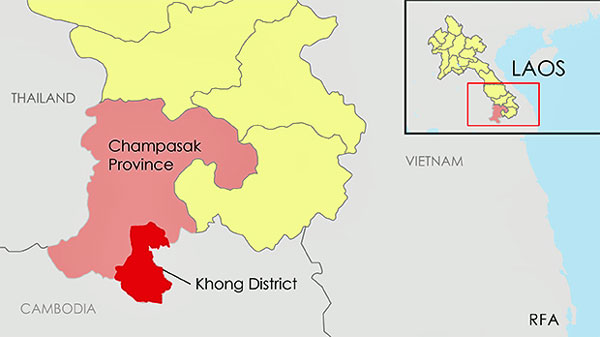 Relevant officials are collecting information for a feasibility study and are conducting a public hearing because the Mahanathy Siphandone SEZ project will have a negative impact on many people, a Khong district administration official, who declined to be named, said Monday.

“The construction will not start immediately because they [developers] are processing the documents in order to apply for approval,” he said.

An official from the provincial land management division, who also declined to be named, told RFA that the villagers who are forced to move will receive fair compensation.

“More importantly, the project must be clearly explained to them and must not force them to leave,” he said.

“The compensation must match their living conditions and ensure that their future lives after resettlement are better than they currently are,’ he said. “The project will not be approved if the villagers are not made better off, which is our policy.”

As one of the least developed Southeast Asian nations, Laos has become a target for massive foreign investment, especially from companies from China, Thailand, and Vietnam, which receive attractive investment incentives from the Lao government.

About a dozen active special and specific economic zones have been created throughout the country to attract foreign direct investment to boost development and job opportunities in rural areas since 2002 when the first SEZ was set up.

The government has said that it plans to build 41 special and specific economic zones, mostly in border areas and remote parts of the country, and that the zones will create about 50,000 jobs and possibly increase local per capita incomes to as much as U.S. $2,400.

You will be cheated first by your Lao government and by their developers friends. It's unstoppable !Somseuay somseuay !