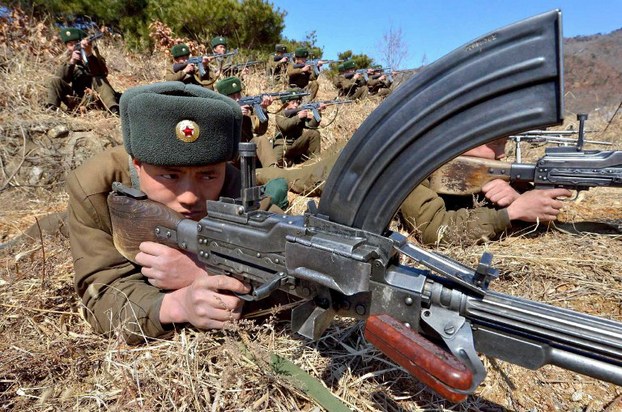 This picture, taken by the Korean Central News Agency on March 20, 2013, shows Korean People's Army soldiers at an undisclosed location in North Korea.

Top soldiers from North Korea’s military are being selected to serve on new “nuclear backpack” attack units under each corps of the People’s Army, North Korean sources said.

“Outstanding soldiers were selected from each reconnaissance platoon and light infantry brigade to form the nuclear backpack unit the size of a battalion,” said a source from North Hamgyong province who declined to be named.

The special units have been formed since March this year, he said.

The nuclear backpack unit of the 9th corps stationed in North Hamgyong province was organized as a battalion affiliated with the 45th division, which is located in Munhwa-dong, Chongam-district in Chongjin city, he said.

The formation of the new squads of soldiers came at around the same time that the members of the U.N. Security Council unanimously agreed to impose a new round of sanctions on North Korea, following the country’s fourth nuclear test on Jan. 6 and the launch on Feb. 7 of a satellite-bearing rocket that the world viewed as a disguised ballistic missile test.

The sanctions are aimed at curbing Pyongyang’s ability to build up its nuclear and rocket programs.

The regular soldiers often go out around private houses nearby to exchange rice and cooking oil for alcoholic beverages and tobacco, the source said.

The uniforms of soldiers selected for the nuclear backpack unit are similar to those of regular infantry troops, the source said, adding that the members of the new units in the 45th division receive no special food or supply benefits.

When the source asked the regular soldiers what the nuclear backpack unit looks like, they responded that they had never seen it, although the soldiers in the unit have been participating in simulated training exercises with dummy bombs, the source said.

Similarly, the reconnaissance battalion of the 43rd light infantry brigade under the 7th army corps stationed in Sanghung-ri, Gapsan county in Yanggang province has been reorganized as a nuclear backpack unit, a source from Yanggang province told RFA.

North Korean military authorities have instructed soldiers about the substance of nuclear pack bombs which deliver the same crushing blow as a nuclear explosion by spraying radioactive material on the enemy, although they don’t generate as big as an explosion as nuclear bombs, the source said.

The dummy bombs that nuclear pack units use for training purposes range in weight from 10 kilograms (22 pounds) to 28 kilograms (62 pounds), he said.

Besides the ones that spray radioactive material, there are also time bombs that have a missile guidance system, he said.

Another North Korean source who was at a drinking party with a nuclear engineer visiting his hometown said the engineer complained that the nuclear backpack bomb was not a miniaturized version of a nuclear bomb, but a weapon that sprays high levels of uranium.

“Once the uranium has been sprayed [in an area], people cannot live there for several decades because of radioactive contamination,” the engineer told the source.

“I don’t understand why they are making those weapons,” the engineer said.

Despite the new sanctions, North Korean leader Kim Jong Un is intent on maintaining and demonstrating its ballistic missile and nuclear capabilities.

His regime was rattled by news in July that South Korea and the U.S. were deploying an advanced anti-ballistic missile system known as Terminal High Altitude Area Defense (THAAD).

In response, Pyongyang said it would "physically act" against the system and make the two allies "suffer from the nightmare [of] extreme uneasiness and terror."

Then in early August, the country fired two intermediate range ballistic missiles—one of which reportedly exploded after launch and another that landed in the Sea of Japan.

Hasn't Kim the Third realized that his tantrums, saber-rattling, and other attention-getting antics have made his dictatorial rule even uglier than his late father's?