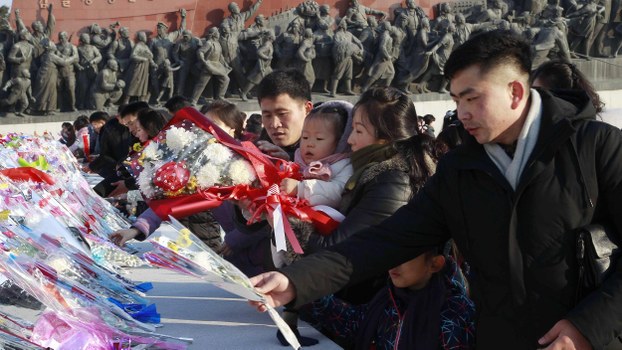 People visit the Mansudae Grand Monument to lay flowers at the feet of the bronze statues of their late leaders Kim Il Sung and Kim Jong Il in Pyongyang, North Korea Wednesday, Jan. 1, 2020.

Authorities in North Korea are threatening to impose fines as punishment on ethnic Chinese residents for failing to participate in political events, signaling a possible end to the leniency the community has traditionally enjoyed as foreign residents, RFA has learned.

Called Hwagyo in Korean, ethnic Chinese residents are not North Korean citizens and as such are not afforded certain rights that citizens have, but they have traditionally been exempt from obligations expected of citizens, including participation in political events.

This exemption, however, is no longer in effect, say sources who cross the China-North Korea border regularly.

In the weeks leading up to the Lunar New Year, which falls on Jan. 25 this year and is one of Northeast Asia’s most important holidays, many Hwagyo plan trips to China and are absent during political events that take place during the period.

The new plan to penalize them for leaving the country at the end of each year indicates that under Kim Jong Un’s leadership, Hwagyo may no longer enjoy special privileges.

“These days, the Hwagyo in Hamhung are leaving for China one by one to celebrate Lunar New Year,” a Hwagyo from Hamhung, South Hamgyong province told RFA on Friday.

“But only those who participated in the [solar] New Year’s Day ceremony by paying contributions for floral tributes to the statues [of late leaders Kim Il Sung and Kim Jong Il] can get exit visas,” said the source.

“A Hwagyo living in Hamhung’s Hoesang district had prepared to leave the country to spend [solar] New Year with his relatives in China, but had to delay his trip when he was told that he would be slapped with a huge fine if he missed the [local] New Year’s Day ceremony,” the source said.

“Even though his mother who had returned to China permanently was ill, he was unable to leave because he was worried about what might happen to him if he missed the event,” said the source.

The source said Hwagyo are now expected to participate in every political event that is mandatory for North Koreans.

“[We] are obliged to take part in political events on major holidays such as New Year’s Day, Kim Il Sung’s birthday and Kim Jong Il’s birthday,” said the source.

“Just like North Koreans, we must contribute monetarily and pay tribute in person to the statues of [the late leaders] from dawn [on these days]. If we don’t do it we will face various disadvantages,” the source added. 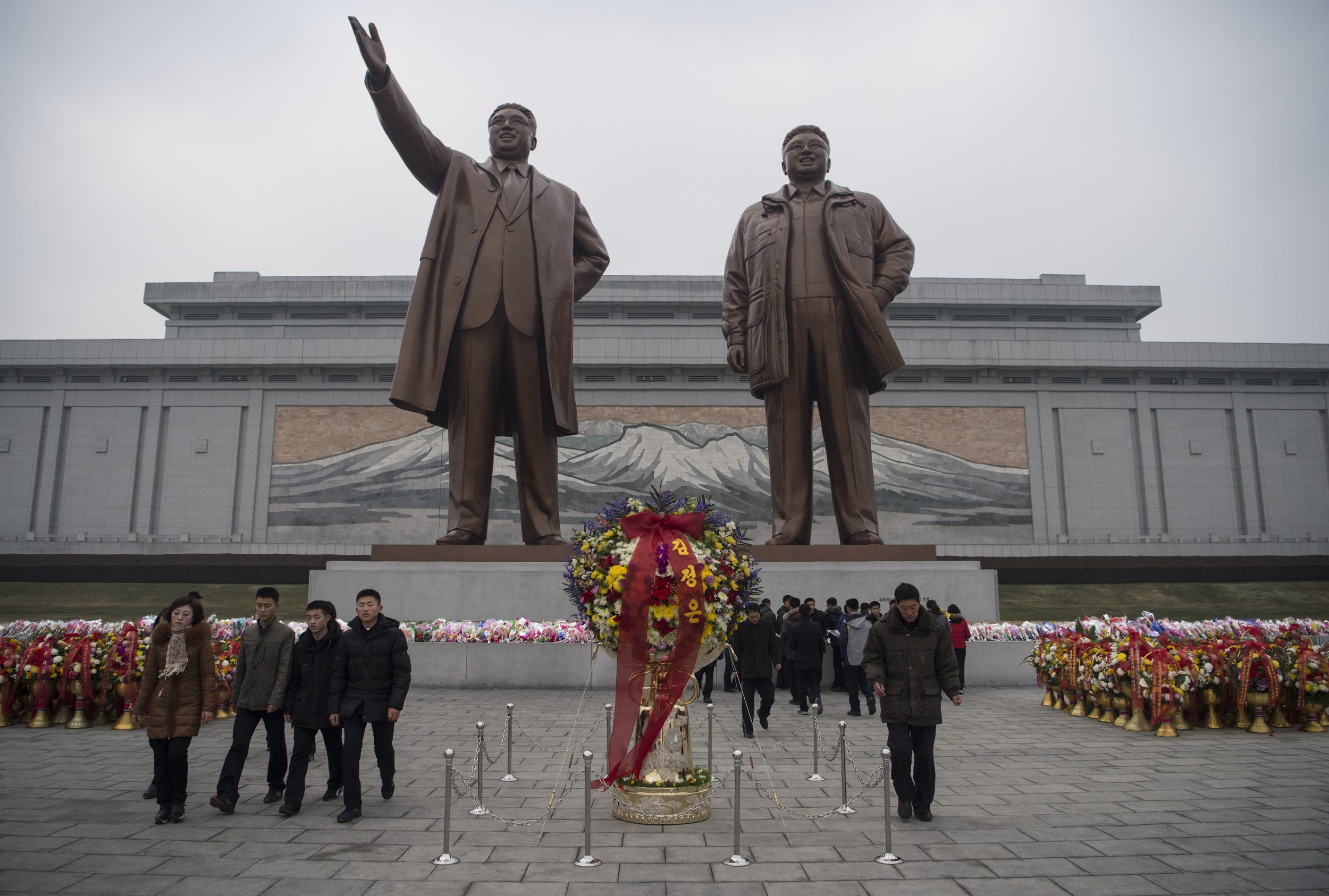 According to the source, Hwagyo civic organizations are outwardly trying to maintain their loyalty, even organizing special tributes.

“On the first day of this year, the Hwagyo committee of South Hamgyong province paid tribute to the statues as a group,” the source said.

“Some of the members of the Hwagyo committee went to Pyongyang as representatives and presented a basket of fresh flowers to the Kim Il Sung statue at the Mansudae Grand Monument,” the source added.

The monument complex at Mansudae is an iconic landmark that includes the famous 66 ft. statues of the former leaders.

“At the end and beginning of each year, Hwagyo have to go to China to raise funds for their yearly business, but as more and more of us are repeatedly absent from political events during the New Year, the authorities are starting to fine and penalize us,” the source said.

A resident of North Hamgyong province told RFA on Saturday that Hwagyo make most of their money during this period.

“They can earn a living as a peddler, selling [North Korean] goods in China, and [bringing back goods] from China [to sell in North Korea], or they can work at Chinese companies during that time,” said the second source.

“The best time for business is at the end and beginning of each year,” the second source added.

“But by traveling to China they were exempt from national political events or social support projects. Authorities caught on and started to impose hefty fines and reign in on issuing exit visas to force the Hwagyo into participating,” said the second source.

The second source cited an example of a Hwagyo trader from Chongjin who had to make a large contribution to continue operating his business.

“He donated 30,000 yuan (U.S. $4,347) as a loyalty offering to the State Security Department [Foreign Affairs Division], because he has to go to China to make money,” the second source said.

“He needs approval from the [department] to do this, so that’s why he made such a large offering,” the second source added.

The second source said that under Kim Jong Un, expected Hwagyo offerings for political and social events have risen significantly.

“The Hwagyo Committee in Chongjin told its members to pay 5,000 yuan (U.S. $725) if they fail to attend the New Year’s political event. This caused many of them to attend and postpone their trips to China.

Hwagyo in North Korea are not recent immigrants from the PRC. Most entered the Korean peninsula at a time when the Republic of China (ROC) controlled the Chinese mainland or during the Chinese Civil War (1927-1949).

During the Korean War, many Hwagyo in North Korea fled to South Korea. Today in the South, most Hwagyo who have not naturalized as South Korean citizens hold ROC citizenship but have few or no ties to Taiwan, the territory currently controlled by the ROC.