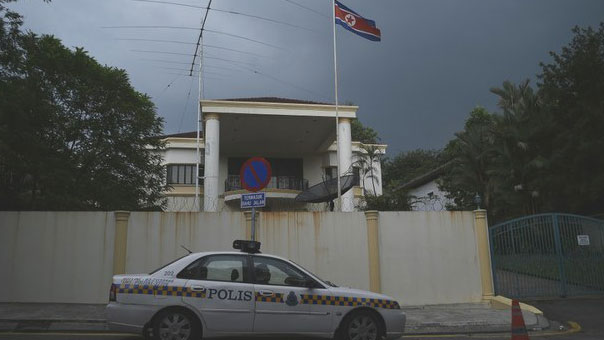 A Malaysian police car is parked outside the North Korean embassy in Kuala Lumpur, March 12, 2017
AFP

Malaysian authorities have deported all workers from North Korea and stopped issuing work permits for citizens of the communist nation, a senior government official confirmed to BenarNews on Friday.

The announcement comes months after a diplomatic row between the two countries broke out following the Kuala Lumpur area assassination of the half-brother of North Korea’s leader in February, and weeks after many North Koreans left the country.

The source who declined to be named, citing the sensitivity of the issue, added that the stop order became “effective two months ago.” The official declined to speak further.

At least 140 North Koreans who worked in coal mines and construction industries in the eastern state of Sarawak have been deported in stages, according to an official based there.

“All in Sarawak have left already,” the official from the chief minister’s office, who requested anonymity, told BenarNews.

Attempts by BenarNews to contact officials at the North Korean embassy in Kuala Lumpur were unsuccessful on Friday.

Two Southeast Asian women have been charged with fatally poisoning Kim Jong Nam, the estranged half-sibling of the North Korean leader, in a chemical weapon attack at Kuala Lumpur International Airport 2 on Feb.13.

Indonesian Siti Aisyah and Vietnamese national Doan Thi Hoang were charged in March with Kim’s murder along with “four others who are still at large” – a reference to North Korean men who were spotted on surveillance cameras at an airport restaurant with the women moments before the attack on Kim. The men boarded planes and left the country later that day.

The women, who face the death penalty if convicted, said they were duped into believing they were taking part in a reality TV show.

The assassination strained ties between Malaysia and North Korea, with both sides expelling their respective ambassadors and imposing exit bans on each other’s citizens, as they argued over the body and suspects holed up in the North Korean Embassy.

Kim’s body was returned to North Korea on March 30 at the same time that nine Malaysians, who had been trapped in North Korea because of the exit ban, returned to Kuala Lumpur.

Meanwhile, the only North Korean restaurant in the country, Koryo Restaurant in central Kuala Lumpur, also ceased operation in May, according to media reports.

South Korea’s Yonhap News Agency said in May that the restaurant was one of 10 around Southeast Asia known as sources of “hard currency for the Kim Jong Un regime.”

“The restaurant, the only one that the North has been operating in Malaysia, recently went out of business, and the North seemed to have withdrawn its workers, a source said on condition of anonymity,” the report said.