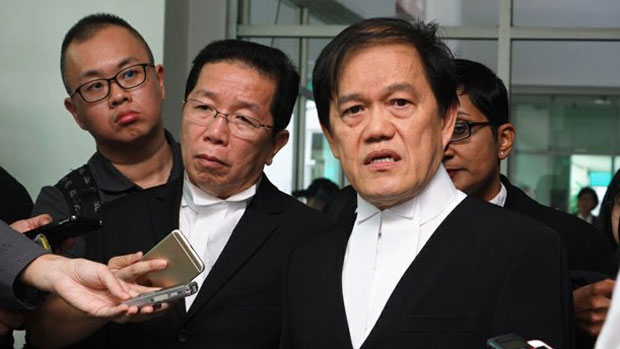 North Korean operatives declared war on Malaysia by importing a deadly nerve agent and using it to assassinate the half-brother of North Korea’s leader, an attorney for a woman accused of the murder said Wednesday, as the trial resumed after a lengthy pause.

In court, defense lawyer Hisyam Teh Pok Teik called for the missing North Koreans to be tried in absentia, as he made closing arguments on behalf of his client, Vietnamese citizen Doan Thi Huong. Four North Korean men whom Malaysian police had linked to the February 2017 assassination of Kim Jong Nam at a Kuala Lumpur airport fled Malaysia hours later.

“This is a declaration of war because chemical weapons have been brought to Malaysia and an assassination has taken place in Malaysia,” the attorney told reporters after Wednesday’s session at the Shah Alam High Court, adding that Malaysia needed to tell the world it meant business in delivering justice.

Through testimony from an expert witness, Malaysian government chemist Raja Subramaniam, prosecutors had established that VX nerve agent was brought in from North Korea, Hisyam pointed out. When questioned on cross examination, the chemist testified that the VX likely was smuggled in from the communist state.

“[Raja] answered yes, because in our airport we have no machines to test, to confirm, to scan, that this is the weapon brought in,” Hisyam said. “So this is from the prosecution, not us.”

Hisyam and Siti’s lawyer, Gooi Soon Seng, said neither of the women knew Kim Jong Nam and had no motive to kill him, the Associated Press reported.

“In our combined 90 years of legal practice, we have not come across a murder case where an accused commits murder in broad daylight and in full view of the CCTV cameras, goes back to the scene of crime two days later in similar circumstances. ... The strength of this piece of subsequent conduct evidence buries the prosecution’s case,” Hisyam told the court, according to AP.

The women claim they were duped by the North Koreans to perform what they thought was a prank to be broadcast on a social media platform.

In court, the two defense attorneys stressed that without the four North Koreans facing charges, the women were not being tried properly.

“Any conviction on the girls on any charge will not be fair,” Hisyam said. “It would be totally unjust.”

While the prosecution was silent in court on Wednesday as the defense presented its view of the testimony and evidence, prosecutor Wan Shaharuddin Wan Ladin did speak to a reporter before the session began.

“No scapegoats can accomplish this mission,” Wan Shaharuddin told AP, challenging the expected defense argument. “You must be trained. No room for failure.”

Malaysia and North Korea had maintained bilateral ties since 1973, but Kim Jong Nam’s death led to a dispute that lasted several weeks.

On March 31, 2017, Malaysian embassy staff and family members who were stuck in North Korean’s capital Pyongyang, returned to Malaysia in exchange for Kim Jong Nam’s body and two North Korean nationals who were thought to be hiding in Pyongyang’s embassy in Kuala Lumpur.

Earlier this month, Prime Minister Mahathir Mohamad announced that the Malaysian embassy in Pyongyang would reopen.

Mahathir, 92, whose Pakatan Harapan government was elected on May 9, also called for pursuing “good relations” with North Korea’s leader. Mahathir made the remarks during a visit to Tokyo.

The trial of the two Southeast Asian women will reconvene on Thursday to hear prosecutors’ arguments before Judge Azmi Ariffin. The prosecution began presenting witnesses and evidence on Oct. 2, 2017, and concluded on April 5 after 39 days of court sessions.

Gooi added that he would leave it to the judge to decide whether the prank occurred as claimed by his client, but “all evidence points toward the innocence of the two girls.”

“We are confident that they should be acquitted.”