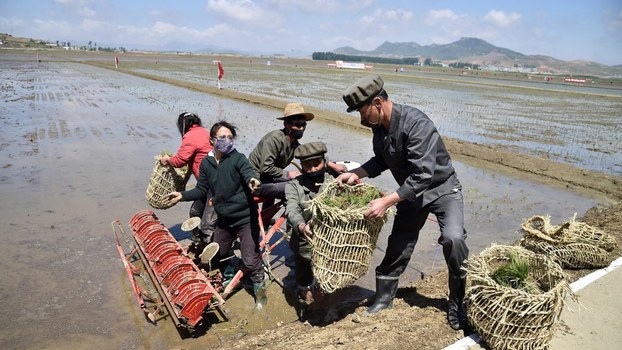 A North Korean campaign to deploy Neighborhood Watch Units to identify starving households in need of government aid drew anger among residents when the survey was followed by orders to donate corn from their own limited food supplies, sources in the country told RFA.

North Korea, which has struggled with chronic food insecurity for decades, suffered an economic shock in January when the onset of the COVID-19 pandemic prompted both countries to shut down the Sino-Korean border.

The coronavirus lockdown followed drought and poor harvests in the impoverished country, whose options to earn cash for imports are limited by international sanctions aimed at depriving Pyongyang of cash for its nuclear and missile programs.

RFA reported in June that China was quietly shipping grain labelled as “construction materials” to North Korea in a secret operation run at night kept to avoid international scrutiny.

Ruling party officials under instructions to provide foodstuffs to households identified as hungry have ordered Neighborhood Watch Units, which keep tabs on the political loyalty of each citizens, to investigate and report which houses need government aid, sources told RFA.

“On the first, a Songchon county Party official came down to our neighborhood for a meeting with the leaders of the neighborhood watch unit to investigate cases of people dying of hunger or going missing since the start of the coronavirus outbreak,” a neighborhood watch leader from the county in South Pyongan province told RFA’s Korean Service.

“The official checked how many households in each neighborhood were starving because they are unable to do business or can’t get food,” the source said.

Neighborhood Watch Units hold regular meetings, where residents are made to hold self-criticism sessions where they must discuss their own shortcomings in political loyalty and criticize their peers. This information is reported up the chain of command, ensuring the government keeps a tight grip on society.

The watch unit leaders’ role as snitches made them a source of knowledge about each household’s relative food security.

“This is the first survey of starving households since the Arduous March,” the source said, referring to the 1994-1998 North Korean famine that killed millions of North Koreans -- as much as 10 percent of its population by some estimates.

The source said the food shortages became more pronounced following a recent declaration of a maximum national quarantine emergency after authorities in Kaesong said they observed COVID-19 symptoms in man who had swam across the border from South Korea three years after escaping there.

After the subsequent lockdown of Kaesong and the ban on travel between provinces, “the people’s food problem worsened, aggravating public sentiment against the authorities,” said the source.

“The central Party ordered its officials to take charge of two households in my neighborhood experiencing the worst difficulties and provide them food,” the source said, adding, “Six families, including an elderly couple, have been checked and registered to the Party.”

“The county Party instructed its officials to take care of those families and provide them with food. However, they do not have enough to supply food to the starving families,” the source said.

Due to the shortage of aid, “the county party committee ordered the heads of the neighborhood watch unit to collect 500 grams (1 lb.) of corn per household and immediately support the families that don’t have food,” said the source.

Residents were unhappy that they were ordered to share their own limited supplies of food, according to the source.

“They protested, saying it was the Party officials who received the Central Committee’s order but now they passed on the burden and collected (food) from the residents. They say it is the mother party that keeps the people from living,” the source said.

Another source, a resident of North Pyongan province who requested anonymity, told RFA the same day that the order has more to do with public sentiment rather than ensuring food security.

“For the 75th anniversary of the Party’s foundation, the authorities are already trying to win the hearts of the public so that residents do not have any antipathy toward the Party,” said the second source. The anniversary is on October 10.

“Authorities urge Party workers to work with extraordinary determination to bloom flowers on the rocks for the people, but instead, only the residents are suffering from the pressure of Party officials to carry out the Party’s instructions,” the second source said.

The North Pyongan resident said that his peers are unhappy with the added responsibilities they have been given as they have been impressed to help the Party achieve its goals.

“In the case of Sonchon County, North Pyongan province, Party officials are mobilizing residents to work every day building a pig farm and a fish farm, saying they are helping local residents develop livestock to solve the meat shortage.

“The residents strongly criticize the Party officials for [being made to] work, as they are sticking us with even the construction costs.”

North Korean leader Kim Jong Un on Friday visited a town in North Hwanghae that was severely damaged by floods caused by torrential rains on the Korean peninsula this week, state media said.

Experts told RFA that the North Korean leader’s visit so soon after the disaster was unusual, given that Kim waited 20 days before visiting a flooded area in Rason, North Hamgyong province in 2015.

“As North Korea has been suffering from sanctions, the coronavirus, and flood damage, it can be seen that the political intention is to highlight the image of the Supreme Leader so that this situation does not lead to a backlash from the residents,” Yang Moo-jin, a professor at the Seoul-based University of North Korean Studies told RFA.

During the visit, Kim ordered food supplies from the State Affairs Commission’s reserve to be delivered along with other essentials to every household in the affected area, according to the KCNA report.

A Red Cross spokesman said the North’s Red Cross Society has “activated its disaster response teams to work alongside authorities and local communities in nine provinces.”

“Teams of Red Cross volunteers are on standby to respond and help communities as needed, focusing on early warning, rescue and relief activities,” said the spokesman.