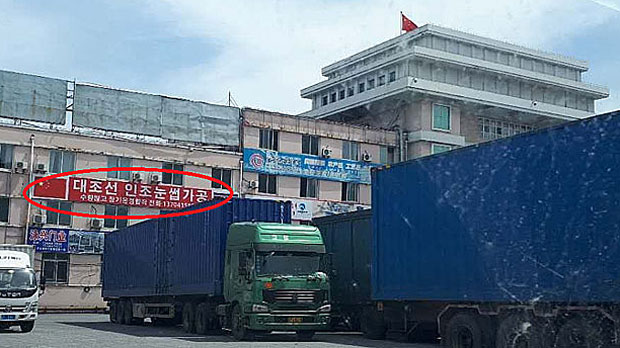 A sign on a customs building in Dandong, China, advertises North Korean-made false eyelashes in a file photo.
RFA

New trade flows between North Korea and China are leading to the exploitation of children hired at low wages in North Korea to work in factories assembling goods for sale across the border, North Korean sources say.

The children, most of them students in their teens, work for firms tasked with generating foreign currency for Pyongyang, still struggling under international sanctions imposed to punish North Korea for its nuclear weapons and missile programs.

These firms bring raw materials for clothing, artificial flowers, and false eyelashes across the Yalu River from the Chinese city of Dandong to the North Korean border city of Sinuiju, a source in North Pyongan province told RFA’s Korean Service.

“The fabric for clothing is then transported to state-run clothing factories, but the materials for artificial flowers and eyelashes is taken to factories in areas containing schools,” RFA’s source said, speaking on condition of anonymity.

“This is because teenagers are being hired to process these products,” the source said.

Because workers are required to handle thin hair, the production of false eyelashes requires “a delicate, technical touch” for which firms prefer to hire young, single women, RFA’s source said.

“However, single women in their early 20s would rather work in factories where they can make more money, and the eyelash processing factories, which pay lower wages, are having trouble finding workers,” he said.

The factories therefore hire teenagers whose hand movements are still flexible, he said.

“These youngsters don’t really have much chance to earn money elsewhere, so they are exploited by being paid only half of what the grownups earn,” he said.

Also speaking to RFA, a resident of neighboring South Pyongan province said that teenagers have been hired “for years” in his area for eyelash processing or other handicraft work and typically work 12-hour days.

“When relations between North Korea and China grow cold, fewer orders for North Korean products come in from China, and the children usually go to school,” the source said, also speaking on condition he not be named.

“But when relations improve, children from families having financial difficulties give up going to school, and start working again in the processing industry.”

Parents who have trouble making ends meet “can’t help their young daughters ruining their eyesight or getting in bad health from working on eyelashes all night long,” he said.

“Poor families have no choice but to make their children earn money until the harvest season comes,” he said.