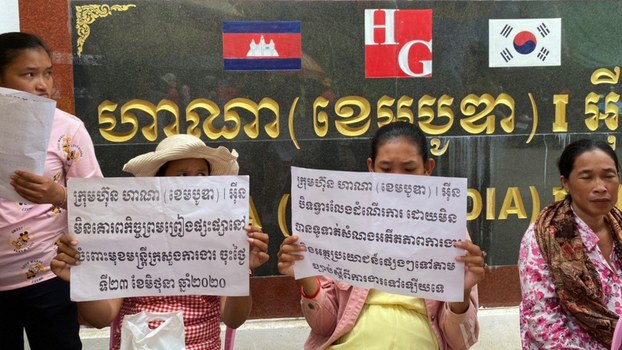 Garment workers from the Hana1 factory in Phnom Penh petition for compensation owed by their employers, July 1, 2020.
Photo provided by workers

Around 300 Cambodian garment workers protested the scheduled closure of their factory in Phnom Penh on Wednesday, calling on the country’s Ministry of Labor to help them get compensation still owed them by factory owners pinched by the economic lockdown to fight coronavirus, sources said.

Hana1, which employs 800 workers, declared bankruptcy on June 22 and is now set to close, with factory representatives saying the factory can’t afford to pay its workers because of financial losses due to the spread of COVID-19.

Workers are only asking to receive money and other benefits already promised to them, a Hana1 worker named So Chea told RFA’s Khmer Service on July 1.

“We are facing many difficulties. Our rent is due soon,” she said. “I have no money now to pay my back debts.”

Hana1 workers trying to petition in front of the offices of Cambodian Prime Minister Hun Sen were blocked from approaching the building by police, who then redirected them to the Ministry of Labor.

Several hundred workers also protested on Wednesday at the now-shuttered Violet Apparel Cambodia in Phnom Penh, with a worker named Chan Malyna telling RFA that the factory had said only that they would suspend workers for two months.

“They also promised to pay each worker $30 each month, but the factory closed when the two months had passed,” she said, adding that some employees who had worked at the factory for 15 to 20 years now have no money to pay their rent or meet daily expenses.

“It is disappointing that the Ministry [of Labor] appears to be biased in favor of the factory,” she said.

Recent protests show that Cambodian factories are unable to resolve labor disputes and pay their workers according to the law, said Khun Tharo, a program coordinator at the Center for Alliance of Labor and Human Rights (CENTRAL).

“These issues are caused by government policy, which is causing workers to lose their benefits,” he said.

In addition to the economic impact of the coronavirus outbreak, Cambodia’s key garment industry faces an uncertain future over the European Union’s impending suspension of trade preferences for the Southeast Asian nation.

The European Union in mid-February announced plans to suspend tariff-free access to its market under the “Everything But Arms” (EBA) scheme for around one-fifth of Cambodia’s exports, citing rollbacks on democracy and human rights—a move that would reinstate tariffs on garments and footwear beginning Aug. 12, unless it is overturned by the EU’s governments or its parliament.

The decision will result in a loss of around U.S. $1.1 billion of the country’s annual U.S. $5.8 billion in exports to the bloc, some 75 percent of which are made up of clothing and textiles—a crucial industry in Cambodia that employs one million people.

Cambodia’s Prime Minister Hun Sen has shrugged off the EU’s move, but unions have warned that the reinstatement of tariffs on Cambodian exports to the EU could leave 80,000 workers from more than 1,000 garment factories in Cambodia jobless if buyers from the bloc stop placing orders because of increased costs.

Garment factory owners have meanwhile urged Cambodia’s government to postpone annual negotiations on a minimum wage, saying the sector needs to first recover from the devastation of the coronavirus pandemic, while unions seek to downplay the severity of its impact and demand that talks go ahead.