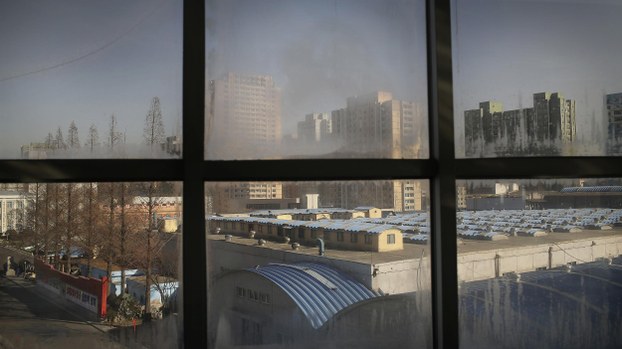 Part of the Pyongyang 326 Electric Wire Factory is seen through glass windows of its recreation center Tuesday, Jan. 10, 2017, in Pyongyang, North Korea.

Police in the North Korean capital Pyongyang have arrested the head of a district government in the city for involvement in real estate fraud, in the latest case of officials getting reported by citizens for using public land or buildings to make illicit cash on the side, sources in the country told RFA.

As the leader of the Chung district People’s Committee – the government of a ward in central Pyongyang -- the man illegally rented out idle government factory buildings to wealthy business figures and pocketed the proceeds of about U.S. $1,500 per month.

The case is the latest in a series of officials getting exposed for real estate-related crimes over the past month.

“On July 29, the head of the Chung district People’s Committee in Pyongyang was arrested on charges of illegally leasing real estate,” a Pyongyang city official, who requested anonymity to speak freely, told RFA’s Korean Service Monday.

“[He] is accused of taking $1,500 per month in return for renting out factory buildings and other sites in Chung district,” the source said.

According to the source, the buildings were factories and other businesses that had stopped operating in February 2019. The committee head had illegally leased the buildings to wealthy business owners.

“Illegal lease transactions between the head of the People’s Committee and the rich [business owners] were known to idled employees of the former factories, so this was reported to the Central Committee [of the Korean Workers’ Party],” the source said.

“[He] was arrested following police investigation,” the source added.

The source said that disgruntled employees at factories were angry when they learned of the scheme involving a trusted community leader.

“They are expressing their discontent over the fact that the head of the People’s Committee, who is supposed to be in charge of people’s lives in the district, thought of filling his own pockets first, and put the difficulties of the people in the back of his mind,” said the source.

“Recently the authorities have been continuously sending out orders and enacting policies to eliminate corruption among officials. It’s going to be difficult for the head of a People’s Committee to avoid heavy punishment, given that he [used] state-owned real estate, going against the Party’s instructions and policies,” the source said.

A second source confirmed it was the disgruntled Chung district factory employees who turned in their People’s Committee leader on July 29.

The Pyongyang resident said Monday that the committee leader was arrested for “illegally leasing factories in and sites in Chung district’s Ryonhwa-2 neighborhood and filling his own pockets.”

“He authorized the rich [business owners] to use the factory buildings and land that had stopped production due to lack of raw materials and operating funds, and pocketed the monthly rent,” the second source said.

“It was reported that employees at the factory, who had been struggling after they weren’t paid. They filed a complaint with a higher level agency,” said the second source.

The second source said that authorities are likely to make an example of the committee leader, as a stoppage in the state’s distribution program has caused the temptation for corruption to increase.

“Since last year, various forms of illegal activities have been appearing among officials because state distribution has been cut off, so now the public does not trust [officials,]” the second source said.

“Therefore, the authorities are expected to raise the alarm once again to the officials through this case by imposing a strong punishment on the [committee leader,]” the second source said.

Corruption is a response to a reduction in official benefits and perks, like food and other goods, according to the second source.

“The authorities have stopped providing special supplies to officials, so they are engaging in corruption to raise a large sum of money while in office, so they can prepare for their own living difficulties and life after retirement.”

RFA’s Korean Service over the past month reported several instances of officials either implicated or arrested for crimes including real estate speculation, attempting to smuggle gold to China, and sex trafficking. Four officials, along with two others were publicly executed, possibly on Kim Jong Un’s orders, for their role in a sex trafficking ring that involved female performing arts college students.

Greg Scarlatoiu, the executive director of the Committee for Human Rights in North Korea (HRNK), told RFA Monday that under North Korea’s pervasive corruption, not all corrupt officials are arrested, and the greatest risk of arrest is faced by officials who do not share their financial gains with seniors, peers, and those under their charge.

As in the case of the Pyongyang committee leader, a group of officials in South Hwanghae province were turned in by ordinary citizens who resented the corruption.

Last month in South Hwanghae province, several land officials were implicated when an investigation revealed they were building houses on government farmland and selling it to rich people for massive profit.

Private ownership of houses is technically illegal in North Korea. The constitution states that all property is owned by the state, and the government typically grants living spaces to its citizens for specific periods of time in exchange for nominal usage fees.

Because the rights to these living spaces can be transferred to others, it presents a loophole for those looking to cash in on property they technically do not own.

Over the course of the investigation, many of the officials were found to “own” several homes, and they now face punishment that could include the seizure of their property. But they could have gotten away with it if not for a natural disaster.

“The investigation began because during the rainy season here in Kangryong county last year, several poorly maintained [state-owned] houses collapsed and the farmers living there had to temporarily live in rural propaganda rooms and could not return home for nearly a year,” a resident of the county in South Hwanghae province told RFA last month.

“When the officials ignored their responsibility to repair their houses and instead used resources to build the new homes to sell, the farmers reported them. This is what led to the investigation,” said the third source, who requested anonymity to speak freely.

To build the houses with state funds, on state property, then sell them for profit, required that several parties be in on the deal, the sources said.

“The military officials had to conspire with farm officials to make false documents stating that the farmland was non-agricultural land that could not be cultivated due to severe acidification,” the third source said.

“They then made money building private houses or taking bribes from rich people so they could use the farmland [to build their own houses]. They got caught this time and they will be punished,” the third source said.

According to the third source, the officials were charged with breaking the Real Estate Management Act for “disposing of state land on their own terms, failing to report real estate built on farmland to relevant agencies, and failure to pay for the use of real estate to the state.”

“Officials who bought several apartment units in Haeju and other cities, as well in other rural areas, were also caught in the investigation. They were harshly punished for fraud and all their houses except for their primary residences were confiscated,” the third source said.