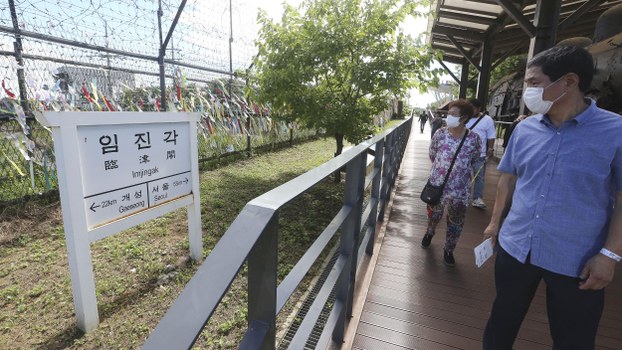 People wearing face masks to help protect against the spread of the new coronavirus pass by a directional sign showing the distance to North Korea's city Kaesong and South Korea's capital Seoul at the Imjingak Pavilion in Paju, near the border with North Korea, Sunday, July 26, 2020. North Korean leader Kim Jong Un placed the city of Kaesong near the border with South Korea under total lockdown after a person was found with suspected COVID-19 symptoms, saying he believes "the vicious virus" may have entered the country, state media reported Sunday.

North Korea may be seeking help from abroad along with propaganda points at home with a weekend announcement of its first suspected COVID-19 case, a report that blamed the infection on an exiled North Korean man fleeing from South Korea, experts told RFA Monday.

The state-run Korea Central News Agency (KCNA) reported that the virus was possibly brought into the country when a man who had escaped to South Korea in 2017 swam back across the border on July 19 in the vicinity of the North Korean city of Kaesong.

KCNA said the man was “suspected to have been infected with the vicious virus,” a claim that South Korean authorities could not confirm. Seoul confirmed that a 24-year-old man surnamed Kim, originally from Kaesong, had re-defected to the North.

According to the KCNA report, Pyongyang declared a maximum national emergency, with leader Kim Jong Un calling an emergency meeting of the Korean Workers’ Party’s Political Bureau on Saturday.

“There happened a critical situation in which the vicious virus could be said to have entered the country,” the report quoted the leader as saying.

The revelation of a possible case follows months in which North Korea outwardly maintained it was free of coronavirus, but imposed a battery of strict measures that betrayed its fears of the pandemic.

Analysts said North Korea could have several motives for changing tack on how it presents its pandemic situation to its population and to the world.

“Pyongyang’s intentions in finally having admitted to the arrival of COVID-19 are not entirely clear and there may be multiple motivating factors,” said analyst Patricia Kim of the United States Institute of Peace.

She cautioned that North Korea’s suspicion that the man is infected with the virus could not be verified, but said it is “notable that Pyongyang chose to publicize this particular case and declare a state of emergency.”

“Pyongyang may be using the declaration of a state of emergency to rally citizens and to demonstrate the Kim regime’s efforts to control the virus. And it may also be signaling to the international community for assistance,” Patricia Kim told RFA’s Korean Service.

Authorities put the city of Kaesong on lockdown, and quarantined the escapee Kim and all who had come in contact with him, as well as anyone who had been in the city over the past five days, KCNA said.

The agency did not specifically say that the man was the country’s first COVID-19 case, but reported that test results were “uncertain.”

Prior to Kim’s escape back to North Korea, Pyongyang had maintained before the international community that it was virus-free, a claim which raised doubts among experts because of the government’s extensive efforts to contain the virus.

The measures have included closing the border with China and suspending all trade, at the expense of North Korea’s nascent market economy, locking down entire counties and cities where the virus was said to have been spreading, and the cancellation of important cultural events.

RFA previously reported that authorities admitted to citizens in public lectures that the virus had been spreading in three areas of the country, including in Pyongyang. Ruling party officials in the capital were dismissed for not doing enough to support quarantine measures.

“The Kim regime has to admit COVID-19 in order to receive more assistance from the international community and UN agencies. Kim Jong Un might've wanted to send out a message like 'help me', 'save me,'” Greg Scarlatoiu, the executive director of the Committee for Human Rights in North Korea (HRNK) told RFA.

Blaming the possible introduction of coronavirus on the re-defector Kim could be seen as another ploy to vilify South Korea and former North Korean citizens who currently reside there, he suggested.

“North Korea has been using COVID-19 as propaganda tool for its citizens. Now North Korea is using this situation to criticize South Korea and defectors by putting all blame on the defector who recently fled South Korea,” Scarlatiou said.

South Korean authorities were unable to confirm that Kim the escapee was carrying the virus when he swam to Kaesong, nor did they comment on his motive for returning.

South Korea has a robust contract tracing system in effect, and Yoon said Kim was not known to have been in contact with any positive cases there. Health authorities tested two people known to have had frequent contact with Kim, and they also tested negative, according to Yoon.

Though it is not clear why Kim chose to return to North Korea, South Korea’s Yonhap News Agency reported that he was wanted for questioning by South Korean police because another North Korean escapee last month accused Kim of raping her.

More than 30,000 North Koreans have settled in South Korea over past several decades, but South Korea’s Ministry of Unification said Monday that 11 have returned to North Korea since 2015, according to the report.