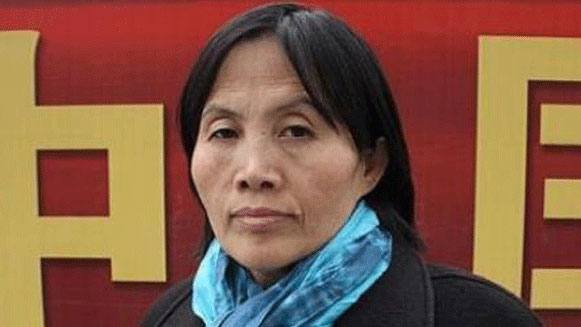 Cao Shunli in an undated photo.
Photo courtesy of HRIC

Experts at the United Nations have called on Beijing to launch an independent investigation into the death of a Chinese human rights activist in a police detention center five years ago, as Beijing faces growing pressure over international criticism of its rights record.

"Cao Shunli’s case is emblematic of the struggle that many human rights defenders in China face," the experts said in a statement on Thursday.

They said Cao, who was detained as she set out for Switzerland to take part in a U.N. Human Rights Council review in September 2013, had "paid the ultimate price" for her activism.

Cao died aged 52 on March 14, 2014, after being denied medical treatment for months while in detention, according to her brother and fellow activists who blasted the government for using medical care as leverage to silence critics.

Her lawyers had made repeated requests for her release to allow her to receive medical treatment, but no action was taken until she was seriously ill. She suffered from tuberculosis in both her lungs, cirrhosis of the liver, and uterine fibroids.

"Today, on the fifth anniversary of her death, we renew our call for an independent, impartial, and comprehensive investigation into her death, with a view to bringing those responsible to justice," the U.N. experts said.

Rights groups and the U.S. State Department have pointed to the growing use by the ruling Chinese Communist Party of enforced disappearances, arbitrary detentions, and medical neglect of detainees in custody.

U.S. Secretary of State Mike Pompeo said on Wednesday that China "is in a league of its own" when it comes to human rights abuses, citing mass detentions of an estimated 1 million Muslims and the repression of Christians, Tibetans, and other religious minorities.

Official repression of the freedoms of speech, religion, movement, association, and assembly was rife, but more severe when targeting Tibetans, Uyghurs and other ethnic and religious minorities, it said.

Chinese foreign ministry spokesman Lu Kang dismissed the report as similar to those of previous years and "full of ideological prejudice."

He said the U.S should "take a good look at its own human rights record."

"China's human rights cause has made great progress," Lu told a regular news briefing in Beijing. "We hope the U.S. will ... discard the Cold War mentality ... and view China's human rights progress in an objective and just way and stop interfering in China's internal affairs with human rights as a pretext."

China — which responds formally to the U.N.'s review of its rights record this week — has also rejected recommendations made by the U.N. Human Rights Council, saying they are "inconsistent with China’s national conditions, contradictory with Chinese laws, politically biased or untruthful."

China has also dismissed outright requests from other governments during its review to join an international treaty on disappearances, the New York-based group Human Rights Watch (HRW) said in a statement.

It also also declined to ratify the International Covenant on Civil and Political Rights, which it signed in 1998, saying it isn't ready.

Beijing also dismissed concerns raised over the mass incarceration of at least a million Uyghurs and other ethnic minority Muslims in "re-education" camps in the Xinjiang Uyghur Autonomous Region, it said.

"It’s a rejection of the Human Rights Council’s mandate, a confirmation of China’s bad faith in participating in such reviews, and, most urgently, an indication that Beijing will continue committing mass human rights violations in Xinjiang," HRW China director Sophie Richardson wrote.

Several rights groups have noted during the review that China’s system of “Residential Surveillance in a Designated Location,” or RSDL, legalizes enforced disappearances and exposes individuals to greater risk of torture, ill-treatment, and medical neglect.

"It is a source of tremendous regret for us that Cao Shunli’s tireless work in defense of human rights ultimately culminated in her death, and our thoughts are with her family and friends at this time," the U.N. experts said.

Meanwhile, jailed rights activist Ji Sizun was awarded the fifth Cao Shunli Memorial Award for Human Rights Defenders, for his contribution in promoting legal rights and education at the grassroots level in China.

"The award has been given to those who carry on Cao’s grassroots advocacy while facing threats and risks in promoting human rights, protecting vulnerable social groups from abuses, pushing for civil society participation in international human rights mechanisms, and monitoring the Chinese government’s implementation of its human rights obligations," the overseas-based Chinese Human Rights Defenders (CHRD) network said in a statement on its website.

Ji, 70, is a self-taught legal activist from the southeastern province of Fujian who was detained in October 2014 for publicly supporting the pro-democracy protests in Hong Kong.

He was later handed a four-and-a-half-year jail term for "gathering a crowd to disrupt public order" and "picking quarrels and stirring up trouble" for helping petitioners to organize two protests in August and September 2014.

"Ji Sizun’s health has seriously deteriorated during his incarceration, and he suffered a debilitating stroke in 2016 and has not received sufficient medical treatment for a number of severe health conditions," CHRD said.

He will be released from Putian Prison in Fujian Province on April 26, 2019.

Reported by Lin Ping for RFA's Mandarin Service, and by the Cantonese Service. Translated and edited by Luisetta Mudie.