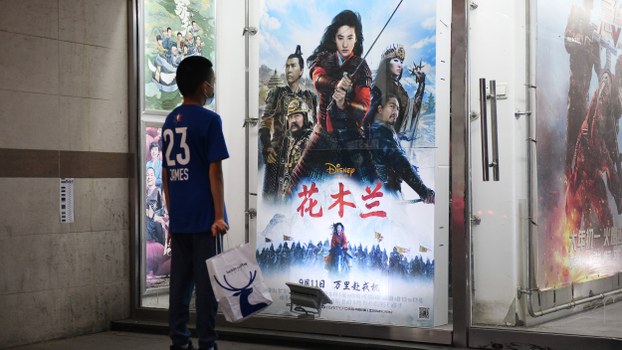 A boy looks at a poster for the Disney movie 'Mulan' outside a cinema on the day it opened in Beijing, Sept. 11, 2020.

Creative workers overseas have hit out at Hollywood over what they say is the movie industry’s long-running failure to stand up to China over human rights abuses, which include the mass incarceration and persecution of Uyghurs and other ethnic groups in the northwestern region of Xinjiang.

Following Disney’s release last month of the live-action remake of Mulan, the media empire sparked an international outcry after it thanked Xinjiang branches of China’s feared state security police, who are closely linked with a network of internment camps, a program of cultural genocide against Uyghurs and other ethnic groups, and the regionwide monitoring, harassment, and surveillance of residents.

U.K.-based writer Ma Jian said Disney’s unapologetic use of locations in the Xinjiang Uyghur Autonomous Region (XUAR)  just a few miles away from incarceration camps was a scandal, and showed that Disney was only too happy to collude with China’s repressive regime.

“It’s truly disgusting that China built concentration camps and that the Disney production team just passed close by and even thanks [the authorities],” Ma told RFA. “All those people had lost their liberty, locked up in concentration camps, while they were making a movie right there.”

“Disney clearly had no concern for what was going on in the background. What were they thinking, shooting there?” he said.

Disney released its U.S. $200 million live-action version of the popular 1998 animated film “Mulan” about a young woman who pretends to be a man so that she can join the military on behalf of her sick father on its streaming platform Disney+ on Sept. 4.

In the credits, the company thanks several entities known to have contributed to Beijing’s repressive rule in the XUAR, where authorities are believed to have held up to 1.8 million Uyghurs and other Muslim minorities in a vast network of internment camps since April 2017.

Among those thanked in the credits are the Chinese Communist Party’s propaganda commission in the XUAR, which has sought to justify the camps as voluntary “vocational centers,” despite reporting by RFA’s Uyghur Service which has found that detainees are mostly held against their will in poor conditions, where they are forced to endure inhumane treatment and political indoctrination.

Disney also thanked the Turpan (in Chinese, Tulufan) prefectural branch of the Xinjiang Public Security Bureau, which in July was sanctioned by the Trump administration for its role in abuses in the region.

According to Ma, the problem of filmmakers kowtowing to the Chinese Communist Party is a longstanding one for Hollywood.

“Disney aren’t the only ones to betray the values of their country of origin by welcoming the Chinese Communist Party, even laying out the red carpet for them.”

Actress and former Miss Canada Anastasia Lin, who has been outspokenly critical of China’s human rights abuses in the past, said little appears to have changed in Tinseltown.

"Nobody puts a gun to the heads of Hollywood screenwriters and asks them to produce work that will please Beijing, but they still do it,” Lin told RFA.

“Although they are free to speak out on behalf of the Chinese people, they choose not to do that, which is very disappointing,” she said.

Lin said her own career in Hollywood has been negatively affected by her human rights activism, as major Hollywood studios continue to form joint ventures with state-owned Chinese companies that are entirely controlled by the Communist Party.

"This has created an economic incentive for self-censorship,” Lin said. “You can be pretty sure that no project that is critical of the Chinese Communist Party will see the light of day.”

On Sept. 11, the co-chairs of the bipartisan Congressional-Executive Commission on China (CECC) Senator Marco Rubio of Florida and Representative Jim McGovern of Massachusetts led 17 other U.S. lawmakers in writing an open letter to Disney Chief Executive Officer Bob Chapek, demanding clarification on the company’s cooperation with XUAR agencies.

You Ziwei, director and producer of the Hollywood production company Light & Shadow Pictures, said the letter had likely had little impact in Hollywood, however.

"In the entertainment industry, everything is still all about commercial success." You told RFA.

“People generally avoid talking about social justice in case it has an impact on commercial value.”

The exile group World Uyghur Congress told RFA that the Turpan police department has been directly involved in the running of internment camps for Uyghurs.

“The Mulan credits publicly thank a violent organization in China,” group spokesman Dilshat Rashit told RFA. “The search for profit has blunted any sense of ethics at many companies, and helped to spread China’s genocidal propaganda against Uyghurs.”

“We call on people who care about human rights to publicly boycott Mulan, and call on moviegoers not to ally themselves with organizations involved in extreme forms of persecution,” he said.

U.S. movie director Judd Apatow recently chimed in with criticism of Hollywood in comments made to a chat show on MSNBC.

“Instead of us doing business with China and China becoming more free, what has happened is a place like China has bought our silence with their money,” Apatow told the network’s Mavericks with Ari Melber show.

“As a result of that, we never wake up our country or the world through art or satire that people are being mistreated in our country or other countries. So that’s very dangerous,” he said.

A local official told RFA earlier this month that detainees at an internment camp in an area of northwest China’s Xinjiang Uyghur Autonomous Region (XUAR), where Disney shot part of Mulan, are being subjected to forced labor making socks and crushing gravel.

Turpan, where the film was shot in part, is a prefecture-level city in eastern Xinjiang whose population of around 650,000 people is some 75 percent Uyghur. The ancient Silk Road city is known as being one of the earliest to have rolled out a campaign of “transformation through education” of Muslims, beginning in August 2013.

RFA recently learned from local police officers that as many as eight camps are in operation within the prefecture’s boundaries, despite claims in Paris earlier this month by Chinese Foreign Minister Wang Yi that all those sent to camps in the XUAR have been released and placed in employment.

Reported by Mia Chieh-ping Chen for RFA's Mandarin Service, and by Ng Yik-tung and Sing Man for the Cantonese Service. Translated and edited by Luisetta Mudie.m