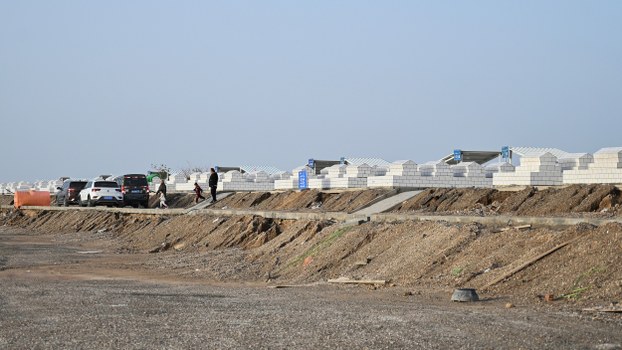 A cemetery on the outskirts of Xinjiang's Aksu city, where bodies from a destroyed Uyghur graveyard were recently moved, Sept. 14, 2019.

Two internment camps recently identified by satellite imagery in northwest China’s Xinjiang Uyghur Autonomous Region (XUAR) appear to be separated by a cemetery and crematorium, raising fears that authorities are working to cover up deaths in the facilities.

Earlier this week, Bahtiyar Omar, the director of the Norway-based Uyghur Transitional Justice Database (UTJD), provided RFA’s Uyghur Service with images from Google Earth Pro that clearly show the construction of camps and associated factories outside of the seat of the XUAR’s Aksu (in Chinese, Akesu) prefecture between 2017 and 2019.

The camps are part of a vast network of similar facilities throughout the XUAR where regional authorities are believed to have held up to 1.8 million Uyghurs and other Muslim minorities since early 2017. Amid increasing international scrutiny, authorities have begun to send detainees to work at nearby factories as part of an effort to label the camps “vocational centers,” although those held in the facilities regularly toil under forced or coerced labor conditions.

Based on the imagery provided by Omar, construction on the two camps outside of Aksu—a city of 660,000 people on the northern edge of the Taklamakan Desert—began in 2017, while the factory facility appeared nearby in 2018.

“These photos are irrefutable proof that that the centers for so-called ‘voluntary re-education’ and ‘vocational education’ in the Uyghur Region are not merely camps that are managed in the style of prisons but also that China’s camp policies have been combined with forced labor from 2018 onward,” Omar told RFA.

Additionally, he pointed out imagery that showed a large cemetery located within a kilometer of the two camps containing a large building and parking lot—sometimes containing dozens of white cars—that were built in the middle of the grounds in 2017.

“[The structure] appears to be several stories, and it’s large in size,” he said. “If a crematorium is located in this building, it does not seem a coincidence that it would be located between two camps.”

Adrian Zenz, a senior fellow at the Washington-based Victims of Communism Memorial Foundation and a leading expert on China’s policies toward Uyghurs, recently tweeted a new satellite image of one of the Aksu camps, which he described as a “100,000sqm internment camp & factory compound” and shows detainees lined up in the yard.

“These pictures of more than 1,000 orange-clad inmates lined up in front of the camp and the factory building are very important evidence of the ongoing forced labor in the Uyghur region,” he told RFA in an interview, providing additional context for the images.

Zenz also noted the structure identified by Omar within the nearby cemetery, expressing concern that there might be a cremation site near the camps and that authorities might be “trying to conceal” deaths in the camps.

He noted that detainees often include the elderly, who are more at risk of developing conditions that can lead to death if not properly treated, and cited witness testimonies from family members of those who died in the camps that described how relatives are given cremated remains.

“The funeral was done in a very concealed and harsh way,” he said of the testimonies.

“They don't want any sort of mourning. I think that's just quite concerning and part of the whole suppression, also the emotional suppression of what's going on.” 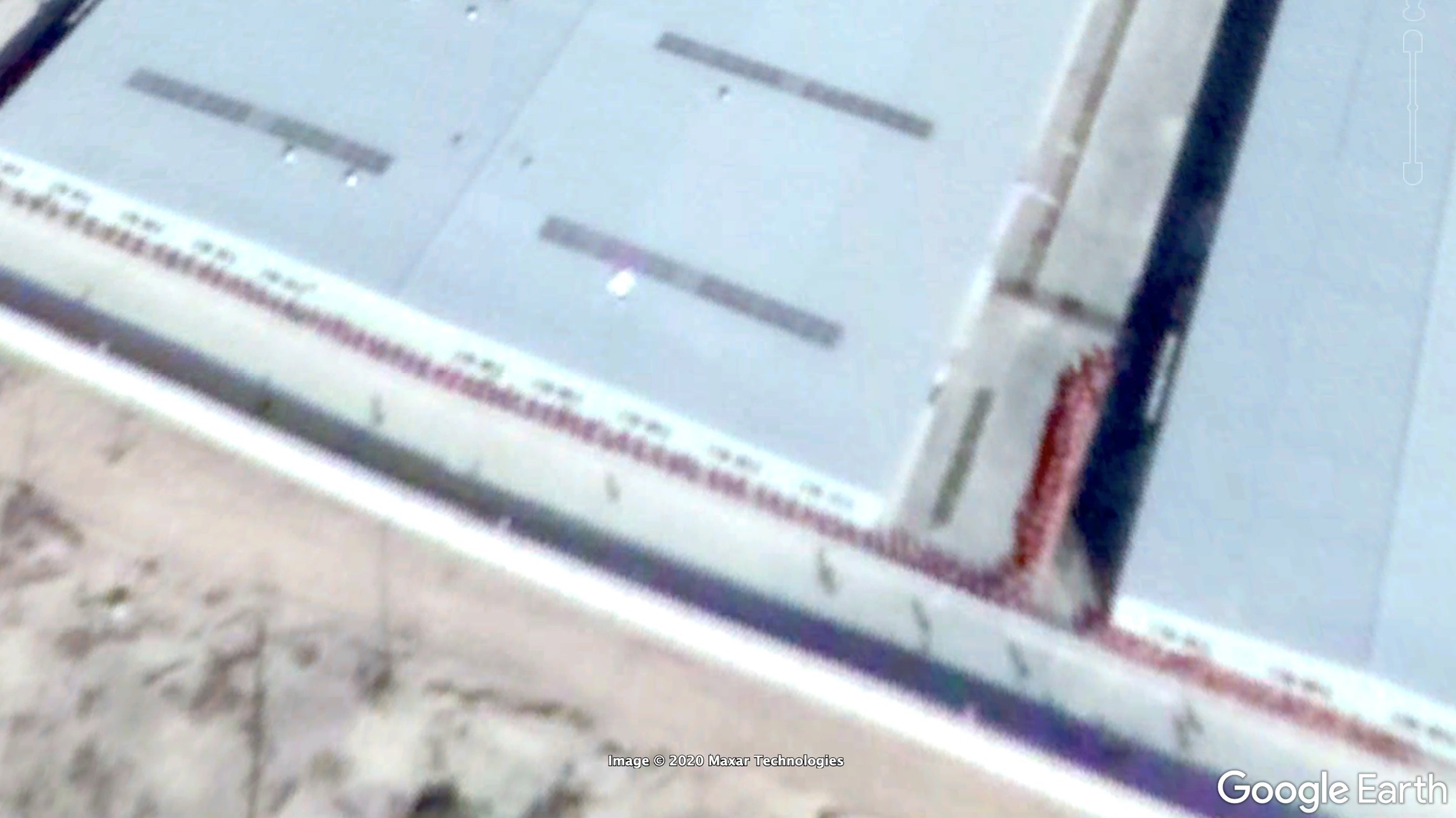 A screen shot of an Oct. 23, 2018 satellite image from Google Earth Pro that purportedly shows one of the internment camps outside of Aksu city with detainees lined up in the yard. Adrian Zenz/Google

Previous reporting by RFA has confirmed that authorities were urgently constructing cremation sites at the same time as they were expanding the camp system in various parts of the XUAR. According to information on the Xinjiang Development and Construction Information Network, a publicly available website, nine cremation centers were constructed between March 2017 and February 2018, including in Aksu.

In June 2018, RFA learned of a facility set up in Aksu’s Shayar (Shaya) county by the authorities with an investment of 8 million yuan (U.S. $1.2 million) that police were using to quietly cremate “minority” bodies.

Zenz said that while the increase in cremation in the XUAR is, on the one hand, due to the need to dispose of bodies, it is also used to persuade Uyghurs and other minorities to abandon traditional Muslim funeral rites.

RFA was able to locate an older image of a Chinese-style gate onto the grounds of the cemetery shown in UTJD’s satellite imagery, which reads “Aqsu City Cemetery.” The cemetery, which was a site for Han burials that began operations in 2003, put up a sign reading “Aqsu Municipal Funeral Services Co., Ltd.” on Oct. 12, 2017.

The company provides a variety of services, including funerals, cemetery construction, and the opening and construction of ecological parks, as well as services in transporting corpses and ashes.

RFA interviewed a representative of the company who confirmed that the company services building includes a crematorium but claimed no knowledge of the situation and hung up after being asked whether their company offices were located near an internment camp.

According to an online ad for Aksu Municipal Funeral Services, the company has a dedicated service used to transport corpses.

When asked how much he would charge to deliver a body to the building from one of the internment camps for cremation, a driver from the company confirmed they were located about a kilometer away and said between 500 and 1,000 yuan (U.S. $75 and $150), although he said he had never done so himself.

Additionally, RFA spoke with an officer from the Aksu City Traffic Police Headquarters who confirmed that there is a Han cemetery located very close to the camp.

“The cemetery is located next to a re-education center, about 500 meters away,” he said.

He added that if any Uyghur without family or who previously agreed to cremation, rather than conventional Muslim burial were to die in a camp, the body would be taken to the crematorium.

Wang Tongmei, the director of Aksu Municipal Funeral Services, told RFA that bodies from the internment camps are taken to the cremation center “in a special vehicle.”

“They don’t bring them to us—we go and fetch [the bodies] ourselves and bring them back in our special vehicle,” she said, adding that the company “can tell you how much it costs after making the delivery.”

When asked whether her company issues a forensic examination certificate about the cause of death for Uyghurs prior to cremation, Wang referred further questions to the “Bureau of Funerary Services.”

In a context in which many Uyghurs in exile have their parents and siblings confined to the camps and cannot help them, some say relatives died in the camps for no reason, but their bodies were not returned home.

Ethan Gutmann, another fellow at the Victims of Communism Memorial Foundation, told RFA he estimates anywhere from five to 10 percent of detainees have died each year in the camps and that the location of a crematorium near the camps outside of Aksu suggests authorities may be cremating the bodies of Uyghurs who have been subjected to torture during interrogations to hide evidence.

“My view is that this was a big mistake for them to put these things in a close location to each other, because it cements what we've been suspecting,” he said.

“Normal deaths in the camp are not dealt with by the cremation center.”