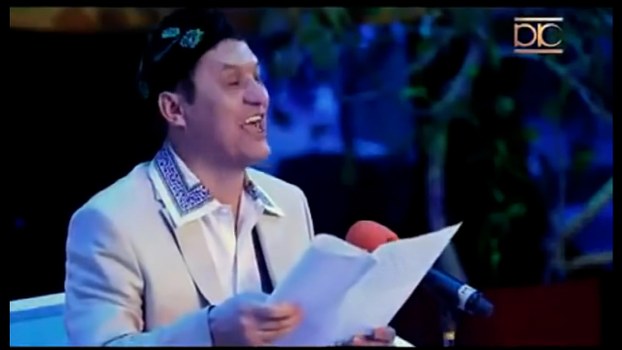 A screen shot from an undated video shows Ablikim Kalkun performing on television in Urumqi.

Authorities in northwest China’s Xinjiang Uyghur Autonomous Region (XUAR) have sentenced a prominent Uyghur comedian and vocalist to a lengthy prison term for performing songs deemed politically sensitive even though they had been preapproved by censors, according to local officials.

RFA’s Uyghur Service recently received a tip from a source with knowledge of the situation that Ablikim Kalkun, who had entertained audiences with powerful songs about Uyghur unity and solidarity for the past two decades, was handed an 18-year sentence in late 2019.

The source, who spoke on condition of anonymity citing fear of reprisal, suggested Kalkun had been sentenced for a number of crimes, including “separatism, religious extremism, and discriminating against national education.”

In addition, the source said, Kalkun may have been targeted for his close relationship with a number of religious leaders, as well as having repeatedly traveled to Turkey—one of several countries blacklisted by authorities for perceived threat of religious extremism—where he sent his two children to study.

Another possibility, they said, is that Kalkun’s position as a widely respected artist who could draw a large crowd might have caused him to run afoul of the authorities, who might have accused him of “disturbing the social order.” The entertainer had been briefly detained for reasons that remain unclear in April 2018.

Based on comments from online forums of Uyghur-language websites, Kalkun’s millions of fans held him up as an exemplar of Uyghur values, a supporter of truth, a critic of social ills, and a champion of Uyghur culture.

In order to verify the source’s claims, RFA spoke with several officials in the XUAR capital Urumqi, where he regularly performed, as well as in Kalkun’s home city of Atush (in Chinese, Atushi), a county-level city of around 270,000 people that is the capital of Kizilsu Kirghiz (Kezileisu Keerkezi) Autonomous Prefecture in the cotton- and grape-growing region of southwestern XUAR.

A Uyghur employee at a district court in Urumqi told RFA he was unaware of Kalkun’s sentencing and referred further questions to the city’s higher-level courts. RFA also spoke with a Uyghur justice employee in Kalkun’s home village of Suntagh who said she had never heard of the entertainer.

When asked where Kalkun had been held in 2018, a Uyghur officer at the Nurluq District Police Station in Atush told RFA, “I have no information about that.”

However, both a Uyghur employee of the Urumqi Intermediate Court and a Uyghur police officer from Atush confirmed to RFA in separate phone calls that Kalkun had been convicted by authorities citing two of his songs—“Qerindashlar” and “Essalamu Eleykum”—as evidence of his “crimes.”

“The phrase ‘essalamu eleykum’ [an Arabic greeting used by Muslims around the world] stirs up religious sentiment,” said the court employee, who also named Qerindashlar (meaning kin) as the song deemed “separatist,” based on what they had heard from colleagues.

When asked what was used as evidence of Kalkun’s separatism and religious extremism, the police officer in Atush told RFA, “the songs were Qerindashlar, Essalamu, and also…” before being cut off.

As a performer in China, all of the content of Kalkun’s songs and comedy routines would have had to be pre-approved and deemed acceptable by government censors.

Kalkun is just one of several Uyghur cultural icons to be sentenced to prison, gone missing, or sent to one of a vast network of internment camps in the XUAR, where authorities are believed to have held up to 1.8 million Uyghurs and other Muslim minorities since early 2017.

Sources in the exile community have said the trend shows that Chinese authorities are “committing cultural genocide by attempting to eliminate the best and brightest Uyghur minds.”

Beginning in October 2018, China acknowledged the existence of internment camps in the XUAR but described them as voluntary “vocational centers” set up to combat radical Islamic terrorism. However, RFA’s Uyghur Service has found that detainees are mostly held against their will and forced to endure inhumane treatment and political indoctrination.