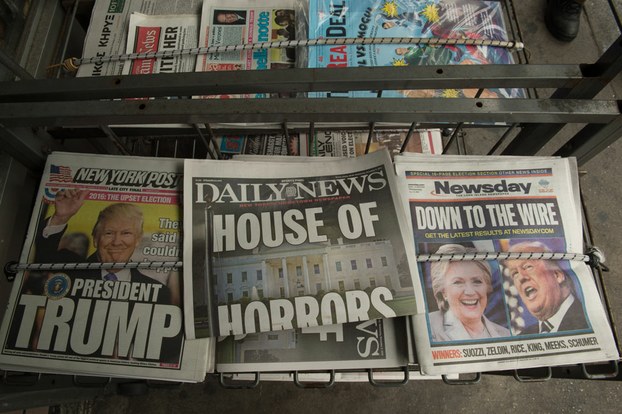 The ruling Chinese Communist Party has "severely criticized" three major internet service providers for offering live-streamed coverage of the U.S. Presidential elections, as Republican candidate Donald Trump swept to victory on Wednesday over Democratic Party contender Hillary Clinton.While President Xi Jinping on Wednesday congratulated Trump on Wednesday, the country's powerful media watchdog called on anyone noticing live-streamed events of election coverage to report them, noting that Chinese portals Netease, Tencent and Sohu have already been ordered to take down live-streams of the poll.

"Live streams on Tencent, Sohu, Netease have already been stopped by Beijing and Guangdong Cyberspace Administration, and have simultaneously been severely criticized," media regulator the State Administration of Press, Publication, Radio, Film, and Television (SAPPRFT) and the Cyberspace Administration said in a report leaked online and translated by the U.S.-based China Digital Times website. "They will be punished accordingly.""Be sure to follow orders on disabling live-streams," the notice said. "If you find other websites that are carrying live-streams, immediately report them."An official who answered the phone at the Beijing branch of SAPPRFT declined to comment, however."I don't know about this," the official said. "Maybe you can check online."Wang Yanjun, former editor of the now-closed political magazine Yanhuang Chunqiu, said he hadn't heard about the leaked ruling, but believed it was "very likely" genuine.

Strong interest in vote"Their biggest fear is that people will start to want free elections and the values that go with them, because the political system in mainland China is fundamentally different [to that of the U.S.]," he said."They probably think that [the coverage] should come with a built-in point of view, that the objective facts should have their standpoint built into them."Sichuan-based rights activist Huang Qi, who founded the Tianwang rights website, said there is plenty of interest among Chinese viewers in such coverage, however."Elections in democratic countries are a taboo topic in China, for example, the Taiwan presidential elections [earlier this year]," Huang told RFA. "Of course the main reason is that the authorities don't want news of the democratic model to spread in mainland China.""At the same time, the official media will be able to take advantage of figures that indicated that more than 50 percent of Americans disliked the campaign and its scandals, to smear the electoral process," he said.And Beijing-based democracy activist Zha Jianguo, who has previously tried to run for elections to his local People's Congress legislative body, said many people in China had simply followed live information feeds via smartphone apps instead, however."It's totally meaningless for them to try doing this, because most people don't care about this much, or at all," Zha said. "But for those who do care, people like me, I found around 10 or 20 chat groups that were dedicated to supplying real-time statistics and results.""They can't block that stuff."

Trump warned on tradeHe said the majority of China's pro-democracy activists had been pro-Clinton, because of her promise to take a tougher stance with Beijing on human rights issues."A lot of us don't really get Trump, so we don't think he's very reliable," Zha said. "But there are different views with the democracy movement."President Xi told Trump in a message reported by state broadcaster CCTV on Wednesday: "I place great importance on the China-U.S. relationship, and look forward to working with you to uphold the principles of non-conflict, non-confrontation, mutual respect and win-win cooperation."But the Global Times newspaper was more outspoken, warning that any trade measures taken by a Trump administration against China would result in "countermeasures.""If Trump wants to target bilateral trade, he should first weigh the consequences of China's countermeasures," said the paper, a tabloid offshoot of the ruling party mouthpiece People's Daily.It warned of growing uncertainty around Washington's foreign policy, adding that Sino-U.S. ties could be renegotiated in "dramatic" ways, with "sharpened conflicts of interests."Trump's victory had also exposed the weakness of the U.S. political system, the paper said."He was known for being a blowhard and an egomaniac. But if such a person can be president, there is something wrong with the existing political order," it said, referring to his "crazy election campaign."But the paper said bilateral ties should not be defined by Trump's personality."China is able to cope with the leadership change of the U.S.," it said.Reported by Lau Siu-fung for RFA's Cantonese Service, and by Qiao Long for the Mandarin Service. Translated and written in English by Luisetta Mudie.

<<<"Elections in democratic countries are a taboo topic in China, for example, the Taiwan presidential elections [earlier this year]," Huang told RFA. "Of course the main reason is that the authorities don't want news of the democratic model to spread in mainland China.">>>

A democratic China means death to the Communist Party. This terrified the ruling Communist Party. Although democratic process looks messy sometimes, the reward is individual freedom to choose their president or prime minister. This is the idea of government of people by the people, not government of a small elitist group decide among themselves. The country belongs to everyone, therefore, everyone should be involved if they wanted to.