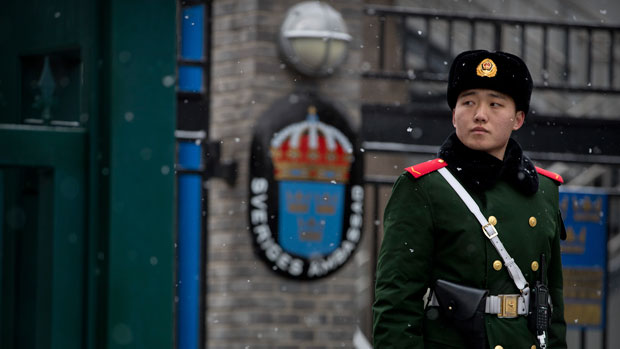 A Chinese police officer stands guard at the entrance to the Swedish embassy in Beijing, Feb. 14, 2019.
AP

Sweden's former ambassador to China will stand trial for diplomatic misconduct after she tried to make a deal with Beijing leading to the release of Hong Kong-based bookseller Gui Minhai, who is currently detained in China.

The decision came a day after hundreds of thousands of protesters once more flooded the streets of Hong Kong in a peaceful protest on Dec. 8 against the erosion of their traditional freedoms under Chinese rule, and to mark Human Rights Day, six months after the pro-democracy movement began.

Anna Lindstedt has been charged by Swedish prosecutors with "arbitrariness during negotiations with a foreign power," specifically linked to a meeting during which she was "in contact with persons representing the interests of the Chinese State."

"An ambassador is the head of a public authority with a far-reaching mandate to represent Sweden; nonetheless, even ambassadors must adhere to certain guidelines and instructions issued by the Government Offices of Sweden and the Ministry for Foreign Affairs," prosecutor Hans Ihrman said in a statement.

"In this specific consular matter, [Lindstedt] has exceeded her mandate and has therefore rendered herself criminally liable," he said, adding that this was the first time in "modern times" that the charge had been brought.

Sweden's foreign ministry recalled Lindstedt in February after she was accused of holding a meeting with Angela Gui, Gui's daughter, without official authorization.

The criminal investigation also began after Angela Gui published an account of the meeting on the blogging platform Medium.com, recounting "a very strange experience in Stockholm" during a meeting with two unnamed businessmen set up by Lindstedt to discuss her father's case.

"What I thought was going to be a meeting about the Swedish government’s latest efforts to win my father’s release turned out to something quite different," she wrote, detailing a meeting in which her movements were restricted to a hotel VIP lounge.

During the meeting, which the Swedish foreign ministry later said it knew nothing about, she was also quizzed about her personal life, and then asked not to speak out about her father's case if she wanted it to be resolved at an unspecified point in the future, she said.

Gui wrote of the meeting: "Nobody would tell me what was going on, or why it was [that] I had to be there," adding that she was offered only vague promises of help in return for her silence, and was escorted at all times during her stay of several hours, during which she was was repeatedly asked not to leave.

Despite a "growing feeling of unease," Gui played along until the businessmen made their plan clearer: for her to travel with them to China. They also told her they had "connections within the Chinese Communist Party."

"I was told I needed to be quiet," Gui wrote. "I wasn’t to tell anyone about this, or say anything publicly about the case. I was also to stop all media engagement with it ... Ambassador Lindstedt, who sat next to me, agreed to the plan."

But Gui refused to stay quiet, saying that threats, verbal abuse, bribes, and flattery were all brandished in a bid to buy her silence.

Gui Minhai was one of five Hong Kong-based booksellers detained by the Chinese authorities for selling "banned" political books to customers across the internal border in mainland China in 2015.

He disappeared under murky circumstances from his holiday home in Pattaya, Thailand, in October 2015, only to reappear in China "confessing" on video to a decade-old alleged drunk-driving offense.

Gui Minhai was "released" by the Chinese authorities in October 2017, but his daughter said he was still not free.

Instead, he was placed under various forms of control and surveillance in his birthplace, Ningbo, during which time he was reunited with his wife Jennifer, who is a German national.

Gui was suddenly redetained in February 2018 while en route by train to Beijing in the company of two Swedish diplomats. State security police said they suspected him of carrying “state secrets” to supply to overseas organizations, according to state media reports at the time.

Changes to the law

The cross-border detentions of Gui and four of his colleagues at the now-shuttered Causeway Bay Books informed much of the argument against plans by the Hong Kong government to change the city's laws to allow extradition to mainland China even before the protest movement escalated in early June.

Fear of arrest or other forms of political retribution have prompted hundreds of Hongkongers, including Gui's colleague Lam Wing-kei, to flee to democratic Taiwan.

After months of mass protests that generally descended into violence after heavy-handed intervention by riot police, Hong Kong chief executive Carrie Lam eventually withdrew the planned changes to the city's extradition laws, months into the protest.

But she has stopped short of moving towards fully democratic elections, an independent inquiry into police violence, an amnesty for more than 6,000 arrested protesters, or ending the official use of the term "rioters" to describe frontline protesters.

Protesters have vowed to continue the movement until all five of their demands are met.

Reported by Jia Ao for RFA's Mandarin Service, and by Wong Lok-to for the Cantonese Service. Translated and edited by Luisetta Mudie.