Taiwan ‘Capable and Willing’ to Cooperate on Coronavirus, Despite WHO Slight 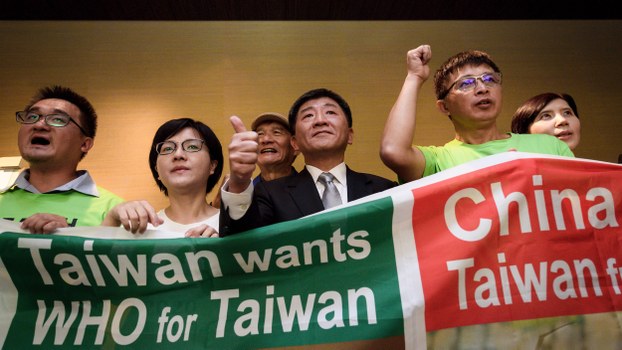 Taiwan's health minister Chen Shih-chung (C) gives a thumb up as he poses with demonstrators on the sideline of the World Health Organization annual Assembly in Geneva, May 21, 2018.

Taiwan is “capable and willing” to cooperate with every country to combat the spread of the coronavirus, President Tsai Ing-wen said Monday, following a kerfuffle over the weekend in which a World Health Organization (WHO) official appeared to dodge a question about granting the democratic island membership.

On Friday, Hong Kong’s RTHK interviewed WHO assistant general-director Bruce Aylward by video link about international responses to the pandemic that has infected some 775,000 people and left more than 37,000 dead. The RTHK reporter asked more specifically about Taiwan, which so far has seen only 306 confirmed cases and five deaths in a population of 24 million.

When asked whether the WHO would consider giving Taiwan membership, Aylward—who in February led a WHO team to the epicenter of the virus in China’s Wuhan city and had praised the government’s response, despite questions over its transparency—paused for several seconds before saying he was unable to hear and requested that the interviewer proceed to the next question.

When pressed further on Taiwan, the line appeared to disconnect, but the journalist contacted Aylward again and asked how the island’s authorities had done so far in trying to contain the virus. At that point, Aylward said “we’ve already talked about China,” before going on to praise the response by China as a whole and then ending the conversation.

The video interview went viral soon after it aired and comes amid an ongoing controversy over how the WHO works with Taiwan and China, which considers the island part of its territory and has blocked it from membership.

Later on Friday, Taiwan’s foreign minister Joseph Wu said in a message posted to Twitter that the WHO should “set politics aside in dealing with a pandemic,” adding that Taiwan had received widespread praise for its handling of the virus in media reports from more than 40 countries.

“These reports do not mistake us as part of China & #TaiwanCanHelp,” he wrote.

On Sunday, the WHO issued a statement noting that Aylward “did not answer a question on Taiwan’s response to the COVID-19 outbreak” during his interview with RTHK, referring to the disease caused by the coronavirus.

It added that the issue of Taiwan’s membership “is up to WHO Member States, not WHO staff,” but said that the organization is working with all health authorities facing the outbreak, including Taiwanese health experts.

As of Monday, the WHO appeared to have removed an earlier listing of Aylward as an assistant director-general from its website.

Also on Monday, President Tsai replied to the WHO’s statement saying she “hoped that all countries after experiencing this outbreak would better understand Taiwan's capabilities and areas of contribution, to seriously consider Taiwan's participation in the global response to the pandemic.”

“Taiwan's stance has always been clear: it is capable and willing to work with countries in health protection, and is also willing to share useful experiences,” she said.

The WHO ended Taiwan’s observer status at its annual World Health Assembly in 2016, the same year Tsai, of the pro-independence Democratic Progressive Party, was elected. Beijing has stepped up efforts to undermine Taiwan’s bid for recognition from the international community as an independent nation since then.

WHO Director General Tedros Adhanom Ghebreyesus has come under fire for praising China, despite Beijing failing to respond to the outbreak initially and resisting cooperation with the international community.

Meanwhile, Taiwan said it has been left out of discussions despite its relative success at containing the virus, which it claims it warned the WHO about in December but was ignored. The WHO only declared a pandemic in March.

While hospitals around the world have been overwhelmed by coronavirus cases, and crucial supplies are running out in other countries, Taiwan's government had its public health response already in place after developing it in the wake of the 2003 SARS epidemic.

In spite of having more than a million of its nationals living or traveling to mainland China and millions of tourist arrivals from China annually, and in spite of the outbreak exploding ahead of the Lunar New Year travel rush, the island has managed to stave off a major outbreak in the community so far.