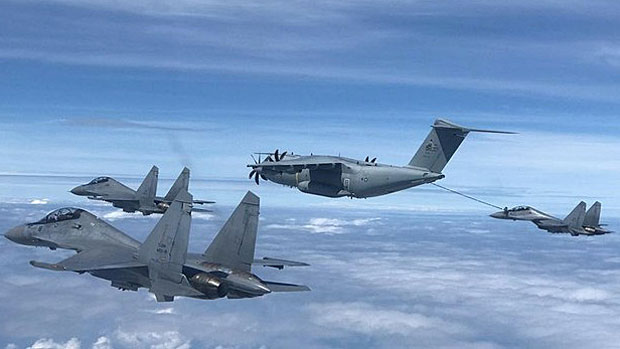 Malaysia’s air force says it is conducting live-fire missile exercises in Sabah state and surrounding waters including the South China Sea, days after the navy carried out similar exercises that followed Beijing’s test-firing of at least one missile in the disputed waterway last month.

The 19-day training began on July 23 and is to run until Aug. 10 in the state located on Borneo Island, the Royal Malaysian Air Force announced in a news release this week.

The RMAF “is conducting live-fire missile exercises with air-to-air and air-to-surface missiles at Kota Belud’s airspace shooting range,” the air force said Thursday. Kota Belud is a district of Sabah that borders the South China Sea.

The training “involves Sabah’s airspace and its surrounding waters,” the release said.

It said the training is “to ensure the readiness of RMAF’s assets and weaponry, especially when it comes to protecting the sovereignty of the national airspace.”

The training is testing pilots’ skills in striking targets using a multitude of weapons in the air force’s arsenal, officials said.

“The public is advised to not panic and worry if they see low-flying RMAF aircraft and hear sounds of explosions in areas within Sabah’s airspace,” the release said.

The exercises involve 232 personnel and feature pilots flying Russian- and U.S.-made fighter jets. On Thursday, pilots dropped gravity bombs from the Russian jets at targets at a range in Sabah, a source in the air force told BenarNews, an RFA-affiliated online news service.

Officials said Navy and Malaysian Maritime Enforcement Agency (MMEA) staff would assist in the training in and around Sabah to ensure target zones were safe. A similar training was held five years ago.

“It is not yearly training. The air force conducts it from time to time according to our requirements,” an air force spokesman said.

During separate training exercises that took place in the South China Sea from July 1 to July 18, Malaysia’s Navy fired guided missiles from a ship and a helicopter, the commander of the military branch announced Tuesday. The naval exercises took place off Kuantan, in Pahang state in Peninsular Malaysia, he said.

The missile firings were held as part of a larger exercise in the waterway that was revived after a pause of several years because of cost concerns, Adm. Mohd Reza Mohd Sany told reporters

“The last time the missiles were fired was in 2014. After five years, it gives us the chance to test the readiness of the guided missiles, missile platform again, as well as the personnel assigned,” he told reporters, adding the missiles hit their targets.

Those tests followed a Chinese government announcement in June that it was carrying out two days of military training in the South China Sea. Its defense minister warned that the country would “resolutely take action” to defend Beijing’s claims over the waterway.

U.S. officials claimed the Chinese conducted missile tests from man-made structures near the contested Spratly Island chain in the South China Sea at the end of June.

“The Pentagon was aware of the Chinese missile launch from the man-made structures in the South China Sea near the Spratly Islands,” Department of Defense Lt. Col. David Eastburn was quoted as saying.

China claims most of the mineral-rich South China Sea, which is home to some of the world’s most important international shipping lanes. Malaysia, the Philippines, Brunei, Vietnam and Taiwan have overlapping claims.

Aruna Gopinath, a Malaysian defense analyst, said it was essential for Malaysia to conduct missile training to ensure its military is on par with others in the region.

“RMAF must be equipped with the knowledge so that in times of a crisis we are able to overcome any problems. We should be self-sufficient and not be dependent on others,” said Gopinath, who retired from the Center for International Defense and Security, National Defense University of Malaysia.

She said overlapping claims over Sabah waters and the volatile and porous maritime border with Mindanao in the Philippines warrant constant vigilance by the armed forces.

“Like what happened in Lahad Datu in February 2013, we never expected an invasion from the Filipino guerillas and took them for granted. Any form of intrusion should be confronted if we have the proper training,” Gopinath said.

A group of more than 200 whose members called themselves the "Royal Security Forces of the Sultanate of Sulu and North Borneo" sailed into Lahad Datu from an island in the nearby Southern Philippines, leading to a six-week armed standoff.

Malaysia and the rest of the members of ASEAN must be very alert about the Chinese invasion. The Chinese have their maritime base in Cambodia and they're moving south closer to your shores.