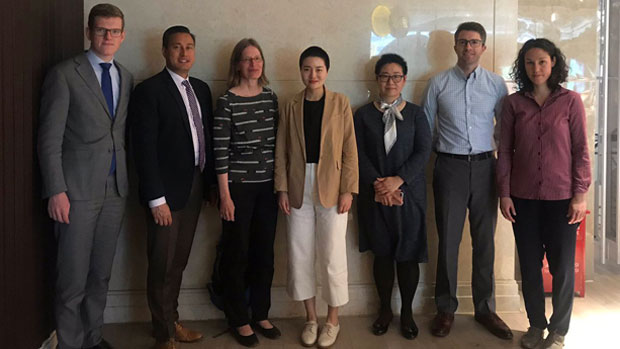 Li Wenzu (C) meets in China with human rights officials from the U.S., Germany, Canada, Switzerland, and the Netherlands, May 6, 2019.
RFA

The wife of jailed human rights lawyer Wang Quanzhang has received two letters purportedly written by him in recent days, in which he "admits" to his "crimes," and asks that she not visit him for the time being.

The unexpected missives come after Wang was detained, interrogated, held in prolonged pretrial detention with no access to family or lawyers, and tried and jailed behind closed doors, prompting concerns that he may have been tortured or otherwise mistreated.

The letter came after authorities in the northern city of Tianjin transferred Wang to Linyi Prison, which temporarily suspended Li's visiting rights.

The letter states that Wang is allowed to take part freely in prison activities, has an improved diet, and is on the mend physically.

It describes Wang as "reflecting on my mistakes," and says that he regrets bringing trouble down on the heads of his loved ones.

On Sunday, Li received a second letter, which reiterated the prison authorities' claim that Li is currently unable to visit him because the visiting facilities are "undergoing renovation."

The letter suggested that Wang's sister, who lives in Shandong, could visit him first, saving Li a trip.

Li said she is suspicious of the letters. While the first appeared to have been written by him, the second bore no date or signature, she told RFA.

Li said she had replied to the first letter on Saturday, but, when she later checked the post office records, they showed Wang had received it a day before she wrote it.

Li said she isn't sure that the letters were actually written by her husband.

"I can't tell from the handwriting alone," Li said.

"There was another family of a lawyer detained in July 2015 who had the same experience; the police handed a letter to [the wife], saying that her husband wrote it, but later, her husband said he didn't know anything about it, meaning that it was a forgery."

"Either way, Wang Quanzhang isn't at liberty, so even if the letter was written by him, there is no way to tell whether that really what he wanted to say," she said.

Li said she had agreed to have Wang's sister visit the prison before her, but said she plans to travel to Linyi Prison in the absence of an arranged meeting within the next three days.

"I requested an immediate visit, as is provided for by law," Li said. "They shouldn't stop family members from meeting, even if their meeting room is undergoing renovation."

"They have repeatedly prevented me from meeting with him, so we are worried about what it is that they are trying to hide," she said. "The crucial question we want to know is, is he in good health?"

An employee who answered the phone at Linyi Prison on Monday repeated the prison's claim that Li couldn't visit Wang owing to renovation work.

"First of all, he is absolutely fine," the employee said. "Work started on the visiting facility upgrade in April and is still ongoing."

"According to the announcement I saw online, that work will likely be finished in mid-to-late June," the employee said. "But there are no specific guarantees when the work will finish."

"These letters are definitely not a genuine result of his own thought processes," Liu said. "They were probably written under pressure from the prison authorities, and under their censorship."

"The prison authorities are just using Quanzhang's voice to say she can't visit him, so as to minimize international concerns [about Wang's health and safety]," he said.

Attorney Lin Qilei, who was appointed to defend Wang but never allowed to meet with him, said the authorities may have already decided that Li will never be allowed to visit him.

"They are using Wang's tone of voice to let Li Wenzu know that she can't visit him," Lin said. "She was right to reply in the way that she did, refusing to play along with their way of thinking."

"It's better to continue to insist on a meeting, and to keep lodging appeals and freedom-of-information requests," he said.

Wang recently began serving a four-and-a-half year jail term handed down on Jan. 28 by the Tianjin No. 2 Intermediate People's Court, which found him guilty of "subversion of state power."

The verdict and sentence followed repeated delays, resulting in Wang being held in pretrial detention for more than three years with no access to a lawyer or family visits.

Rights groups say there are concerns that Wang may have been subjected to torture or other mistreatment in detention, as he was detained incommunicado for such a long period of time, and that this may be the reason behind officials' insistence on secrecy.

During that time, the authorities failed to provide a proper account of Wang’s prolonged detention to the public, including Wang’s family and family-appointed defense lawyers, they say.

Reported by Ng Yik-tung and Lau Siu-fung for RFA's Cantonese Service, and by Gao Feng for the Mandarin Service. Translated and edited by Luisetta Mudie.