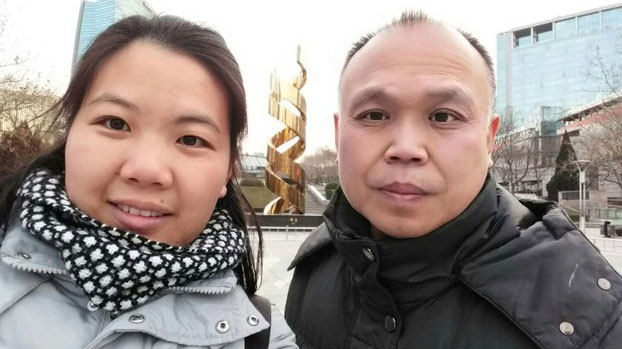 The wife of jailed Chinese rights lawyer Yu Wensheng has warned that he could face disability as a result of his continued detention, amid warnings that he is vulnerable to torture or other forms of mistreatment.

Yu was jailed for four years in June by Xuzhou Intermediate People's Court in the eastern province of Jiangsu, after it found him guilty of "incitement to subvert state power" in a secret trial.

He had already been held for nearly three years in pretrial detention, with no access to family visits or to a defense attorney.

"They haven't allowed me or our children to visit Yu Wensheng once in more than three years," Yu's wife Xu Yan told RFA in a recent interview. "This is inhumane in the extreme, and a violation of the law."

"If he remains in detention, his right hand could be permanently disabled, and even his whole right arm, too," she said.

Fellow rights lawyer Wang Yu said Yu has been at high risk of torture throughout his detention.

"[Yu's] family members and fellow lawyers are very concerned that he has been abused and tortured during this period," Wang said in a message to RFA.

Yu was indicted on Feb. 1, 2019 and his case handed over to the municipal prosecutor in Jiangsu's Xuzhou city. His lawyers made dozens of attempts to visit him, but all requests were denied.

He was held under "residential surveillance at a designated location" (RSDL), a form of detention used in cases allegedly involving matters of state security.

The measure, which enables the authorities to deny access to lawyers or family visits, has been repeatedly used to target human rights lawyers, and is associated with a higher risk of torture and other mistreatment, rights groups said.

U.S.-based legal scholar Teng Biao said the authorities had broken their own laws and trampled on due process, and that the torture of political prisoners under the ruling Chinese Communist Party is commonplace.

"This shows that China is a country without the rule of law or basic human rights protections," Teng said.

"Human rights defenders and dissidents are being constantly persecuted by the authorities... and the persecution has gotten more severe in recent years," he said.

Shortly before his detention, Yu's application to start a new law firm was rejected over comments he made "opposing Communist Party rule and attacking the country’s socialist legal system."

Yu had earlier described being beaten up and tortured in handcuffs by police in Daxing after he voiced support for the 2014 pro-democracy movement in Hong Kong.

Yu was also detained in October 2017 after he wrote an open letter criticizing President Xi Jinping as ill-suited to lead China due to his strengthening totalitarian rule over the country.

In August, United Nations human rights experts called on Beijing to repeal regulations allowing the use of RSDL, because they were in breach of China’s international human rights obligations and commitments.

Previously, the Committee against Torture in its concluding observations had also expressed concern about RSDL.

Reported by Mia Ping-Chieh Chen for RFA's Mandarin Service, and by the Cantonese Service. Translated and edited by Luisetta Mudie.