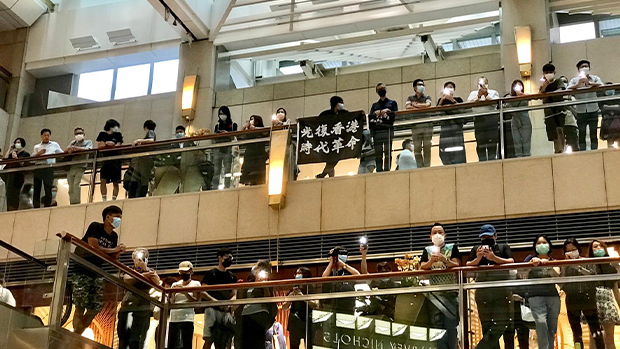 Protesters gathered in parks, malls, and other public places in Hong Kong on Tuesday to mark the anniversary of a two-million-strong mass protest, as the city's leader hit out at widespread opposition to a draconian national security law.

Around 100 people gathered at the International Financial Center, shouting "Free Hong Kong! Revolution now!" and displaying placards. Some waved a blue-and-white flag representing an "independent Hong Kong," an idea that is anathema to Beijing.

A protester surnamed Ng said she was there to mark the two-million march on June 16, 2019.

"I think that day was a big awakening for Hong Kong, when people realized they would have to really fight for their freedoms," Ng said. "[The death of] Marco Leung woke up a lot of Hongkongers too."

"Everyone feels they should take the risks that they are able to take, and turn out when they can," she said.

A protester surnamed Leung said protesters want to keep up their defense of the city's freedoms.

"We need to keep this up," Leung said. "The [ruling] Chinese Communist Party has been cracking down on Hong Kong."

"I think that Hong Kong independence is the only solution."

Hong Kong chief executive Carrie Lam warned on Tuesday that people who seek to "demonize" Beijing's planned sedition and subversion law for the city are "making themselves the enemy" of the majority of the people.

"I call on those who have done everything they can in recent days to smear and demonize this [legislation] to stop, because they are making themselves the enemy of the majority of Hong Kong people," Lam said.

Beijing has said it will impose national security legislation targeting "actions and activities" deemed subversive, seditious, instigated by foreign forces, or supportive of independence, on the city.

In a move widely condemned by foreign governments and rights groups as signaling the end of Hong Kong's autonomy and status as a separate legal jurisdiction, the law will be imposed on the city by the ruling Chinese Communist Party, bypassing Hong Kong's Legislative Council (LegCo).

The move has been widely criticized by foreign governments as being in breach of China's obligations under the 1984 treaty governing the 1997 handover of Hong Kong, and as paving the way for further political prosecutions of peaceful critics of the government, democracy campaigners, and rights activists.

In her comments on Tuesday, Lam repeated Beijing's claim that the move was made necessary by months of street protests and clashes sparked by her own plans to allow extradition to mainland China.

Lam withdrew that legal amendment after months of protest, but pro-democracy politicians and activists say new law will further erode the city's promised freedoms of expression and association, as it will allow China's feared state security police to operate in Hong Kong, a move which was explicitly banned by the city's mini-constitution, the Basic Law.

"Hong Kong society has experienced some great upheavals in recent years, and there have been a number of clear threats to national security and Hong Kong's security that have emerged since June last year," Lam said.

"We want to find a way back to stability, and plug some legal loopholes in the national security situation," she said. "That is why we are bringing in this legislation, and a system for its enforcement."

But Lam said she couldn't comment in detail on the content of the law, nor which "actions and activities" would be regarded as seditious or subversion, or as harming China's national security.

"Only a handful of people who commit acts that violate or endanger national security [will be affected]," Lam said.

She listed "splitting the country, subversion of state power, organizing terrorist activities and foreign forces interfering in Hong Kong's affairs" as the main behaviors targeted by the law.

Chinese officials have already singled out advocating independence for the city -- expressed as "splitting the country" -- as a threat to national security, while groups or activists with overseas funding or connections could also be targeted, as they have been in mainland China under similar laws.

Chinese and Hong Kong officials have commented in recent months that front-line protesters, who have fought back against thousands of canisters of tear gas, rubber bullets, live ammunition, chemically treated water cannon, pepper spray, and batons with petrol bombs, bricks, and other projectiles, are engaging in "terrorist" activities.

It is unclear exactly which activities might constitute "subversion of state power," but such charges are routinely used to target peaceful critics of the ruling party in mainland China, including journalists, rights activists, lawyer, and public intellectuals.

Lam said the legislation wouldn't affect the rule of law in Hong Kong, judicial independence, nor the "high degree of autonomy" promised as part of the handover arrangements.