Far from steering China through 30 years of economic reform toward an economic miracle, a former top official says the Communist Party has greatly damaged the country's economic development, drawing parallels with what the warlords were able to achieve in 1927.
2008-12-30
Tweet 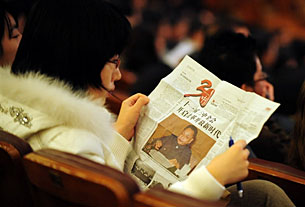 In the fourth part of a series commemorating 30 years of economic reforms in China, Bao Tong, former aide to ousted late premier Zhao Ziyang, says there is no need to thank the Communist Party for China's economic miracle:

The whole point of the reforms was to get out of the dead end that was Maoist socialism and to find a road that led somewhere. But reforms were cut off in their prime when Deng Xiaoping ordered tens of thousands of army troops to start shooting at the people.

Political reforms received their death sentence on the day that economic reforms died. The new secretary-general told the Central Party School that he would pursue and obliterate privatization of the economy. Economic growth promptly plummeted for the next three years. Once more, Deng came to the shocked conclusion that not pursuing economic reforms would lead China nowhere. But that was the road to nowhere for the Party!

Consequently, on his southern tour [in 1992] Deng said that anyone who wasn't willing to push forward reforms should step down, and we saw "good hard reasons for development" sticking out from the frozen earth of stability, which had been used to suppress everything. And so reforms were resurrected in name only as the handmaiden of "hard reason," and continued their existence in this way.

But by this time there were some changes in the big picture. Back then, thanks to the Third Plenum, everybody had been talking at once, causing a terrible hubbub, feeling their way. Now, we were back to the Party being in charge of everything (from the leasing of land, to the privatization of enterprises, from bank loans, import-export deals, orders for goods and services, to contracts for tender), and all of it based on the suppression of those demonstrations in Tiananmen Square, and on the continuing silence of the Chinese people.

There were other differences too. When we were carrying out reforms the first time around, a lot of powerful people had resisted them fiercely because it meant a dilution of their own power. Secretary-General Hu Yaobang once said with a sigh: "Careful to the left, careful to the right, not too fast, not too slow. Walking is a tough job!" And the reason why it was so tough was the obstacles put in his way by powerful cadres.

After Hu and Zhao Ziyang were gone, the new secretary-general got the bureaucrats on his side, and relied on them to distribute the rewards of power according to its dictates. It was like the time of the Empress Dowager Cixi at the beginning of the 20th century, which was "all about the new." It was the epitome of "might is right." And for a brief time, it raised the level of awareness of reform, ushering in an era that was "all about reforms." The phrase "all about" has a history of about 3,000 years; it's classical Chinese, and it means uniform implementation and full, collective participation.

"The bureaucrats run everything," Stalin once said. We had entered the age of the super-elite. In ancient Egypt, the Pharoahs used 1,000 years' worth of slave labor to build the miracle that was the pyramids. In China, as tens of millions of workers lost their jobs in mass redundancies [from privatizing state-owned enterprises], 100-200 million rural residents were flocking to the cities to look for work.

China's Communist Party built its own version of the pyramids: the country's economic miracle, on the back of this massive supply of cheap labor. The pilgrims who went to see the 2008 Olympic Games in Beijing were fulsome in their praises. China was prosperous. China was rising. This was the Communist Party's main theme. In tasting the fruits, we were to remember where they came from: from the Communist Party's support of the four core principles, and we should be grateful to the Party for directing the reforms.

Today, China's per capita GDP ranks 100th in the world, and its overall output is the fourth largest in the world after the United States, Japan, and Germany. Some experts even believe it has overtaken Japan. And this is all thanks to the Party's leadership! Well done!

Eighty-one years ago, Comrade Zou Taofen, a famous journalist, wrote an article as editor-in-chief of Life Magazine, Issue 48, Vol. 2, in 1927, titled "A comparison of the wealth of the nations of the world." What the article said was: "The United States is the richest, and Britain is the second richest." It added, "China's national wealth ranks third in the world, ahead of Germany, Japan, and France."

Zou Taofen commented wistfully, "If only the warlords didn't have monopolies, if only we didn't squander money on the armed forces, and if only the peasants weren't so poor! We can only sigh!"

I should explain here that at that time a lot of British colonies had not yet won their independence, so the parameters for these statistics cannot be compared with those of today.But this article was written in 1927, and can only have used data going up to 1926 at the very latest. China, unified by the Northern Warlords at that time, was still ranked above Japan and Germany. Who should we thank for that? Should we thank the Northern Warlords? Zou Taofen thought not. And neither should the Communist Party get the credit for China's situation today.

After 20-30 years' worth of damage from the four basic principles, it has been as much as we can do to approach the world rankings achieved by China under the Northern Warlords. What does this prove? It proves just how damaging the Communist Party has been! How could we even begin to talk about thanks?

So it hasn't been easy, getting to the economic ranking that we had at the time of the Northern Warlords. The price we have paid for it today has been too steep: a cheap labor force, added to massive plunder of natural resources, added to poisoned air and polluted water. The ancestors look down on their descendants here on earth, but I don't know if anyone is laughing.

Original essay in Chinese by Bao Tong, broadcast on RFA's Mandarin service. Director: Jennifer Chou. Translated and produced for the Web in English by Luisetta Mudie. Edited by Sarah Jackson-Han.