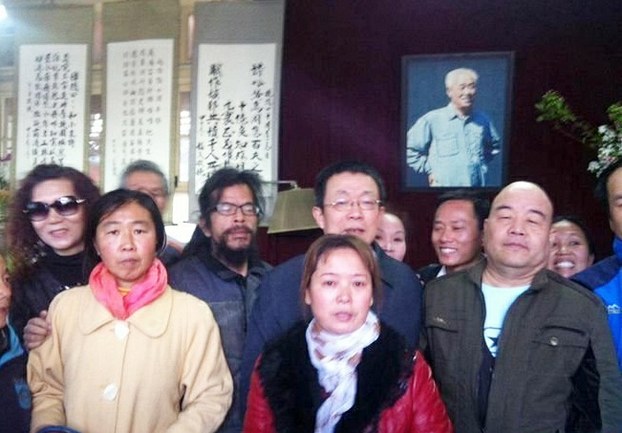 Petitioners visit the home of the late Zhao Ziyang during Qing Ming festival in Beijing, April 5, 2015.

Photo courtesy of an activist

Police in the northern Chinese province of Shaanxi detained dozens of members of an anti-corruption campaign group after they tried to hold a public memorial for the father of President Xi Jinping, while well-wishers scuffled with police at the Beijing home of a late, ousted premier on the traditional grave-sweeping festival over the weekend, activists said Monday.

Thirty-one activists, many of whom have pursued long-running complaints against China's ruling Communist Party, tried to visit the Xi ancestral home in Shaanxi's Fuping county to mark Sunday's Qing Ming festival, a day that is traditionally given over to honoring the dead in China.

They were intercepted by the authorities and taken to a local police station, where five were later escorted to the railway station and a further 21 were released.

The remaining five remain unaccounted for, activists said on Monday.

"Members of Long March Against Corruption gathered to pay memorial respects to the elder Xi Zhongxun, but there were riot police at the door when we got there," activist Zhou Guangdong told RFA.

"They confiscated our ID cards, and then they dragged us into a vehicle that had no license plates, and took us somewhere they said was a reception center for the Fuping county police department," Zhou said.

"Then they brought in a bus to take us up to Chengyang railway station ... where they had already bought us train tickets [out of there]," he said.

"But when we got the tickets and our ID cards back, we saw that the train had already left."

Zhou said the Long March Against Corruption is largely formed of petitioners, many of whom have pursued complaints against alleged official wrongdoing, often over forced evictions, loss of land to development, or abuse of police power.

Tianjin-based activist Tang Xinbo, who was detained at the same time as Zhou, said the majority of the group's members hail from northern China.

"So many of us petitioners haven't received any justice and we are under pressure [from the authorities," Tang said, adding: "Petitioners are the ugly face of China. Of course they don't want us there paying our respects."

"We have been forced to this, because the complaints offices aren't taking new cases now," he said.

Meanwhile, petitioners in Beijing scuffled with police after they tried to visit the former home of late, ousted premier Zhao Ziyang.

"I went to Fuqiang alley with my husband [on Sunday] to pay our respects to Zhao Ziyang, but there were police and security guards there, and they tried to stop us going in," Beijing petitioner Zhang Shufen told RFA. "They shoved us around, and nearly made my husband fall over."

"There were armed police and plainclothes detectives at the door of Zhao Ziyang's house," she said.

Zhang said she had seen around a dozen others arrive at the same time she did, 8:00 a.m. on Sunday morning.

"People were arriving in small groups, all from out of town, and we went down there together," she said. "Then five or six policemen came running up and chased us."

She said the group was finally allowed in after Zhao's son Zhao Erjun came out and invited them inside.

In Hong Kong, activists also laid wreaths for those who died during the 1989 bloodshed on Tiananmen Square, when the People's Liberation Army cleared the capital with tanks and automatic weapons, ending several weeks of student-led pro-democracy protests in Beijing.

The communist party has continued to ignore growing calls in China and from overseas for a reappraisal of the 1989 student protests, which it once styled a "counter-revolutionary rebellion."

Zhao Ziyang fell from power in the wake of the military crackdown on the protests amid accusations that he took too conciliatory a line with the students.

Zhao, who died 10 years ago on Jan. 17, is rarely mentioned in public, and his name and image have been removed from many official publications.

'Millstone around the neck'

Pan-democratic lawmaker Leung Kwok-hung, known by his nickname "Long Hair," said Beijing is afraid to change the official verdict of "counter-revolutionary rebellion" regarding the pro-democracy movement.

"They are afraid to change the verdict on June 4, 1989," Leung told RFA. "I don't think they have the courage to do it, because [President Xi] isn't an elected leader; he's the successor and next generation to [late supreme leader] Deng Xiaoping."

"For every day the dictatorship continues, June 4 will continue to be a millstone around the neck of the party," Leung said.

Asked about the bid to pay respects to Xi Zhongxun, Leung hit out at President Xi's anti-corruption campaign as "a fantasy," for as long as it fails to include grass-roots campaigners and whistle-blowers.

Albert Ho, lawmaker and chairman of the Hong Kong Alliance in Support of Patriotic Democratic Movements in China, said that there is still broad popular support for remembering the June 4 crackdown in Hong Kong.

"The numbers attending go up and down," Ho said. "Sometimes tens of thousands, sometimes hundreds of thousands attend, and we've even had a million at its peak."

"I think everybody knows very well that if they come out onto the streets, it's in the cause of freedom, democracy and human dignity," he said.

"I believe that our willpower and our conscience will stand the test of time."

As well-wishers paid their respects to Zhao, his family said that they have received official approval to inter his ashes, 10 years after his death in 2005.

Zhao's ashes will likely be buried alongside those of his wife Liang Boqi, who died in late 2013, Hong Kong's English-language South China Morning Post reported on Sunday.

His ashes have remained until now at his former courtyard home in Beijing's Fuqiang alley after his family declined proposals to bury him in the revolutionary cemetery at Babaoshan, on the outskirts of Beijing.

Reported by Xin Lin and Yang Fan for RFA's Mandarin Service, and by Dai Weisen for the Cantonese Service. Translated and written in English by Luisetta Mudie.