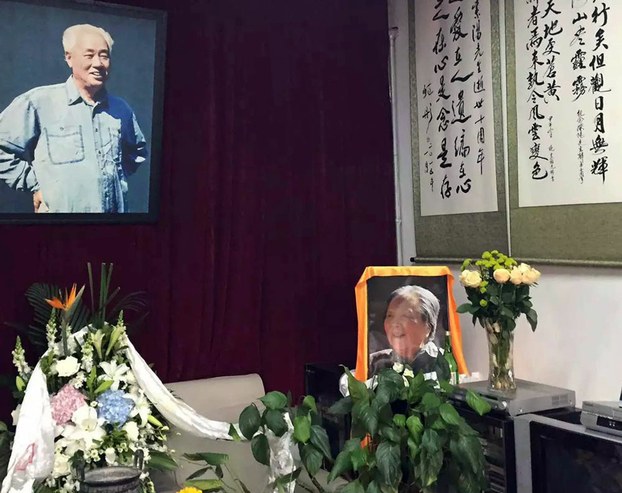 A memorial to Zhao Ziyang and his wife at their family residence in Beijing, in an undated photo.

Photo courtesy of a family member

Authorities in China's capital have turned down an application for a burial plot for the ashes of late ousted premier Zhao Ziyang and his wife, as dozens of activists and ordinary Chinese marked his birthday at the weekend.

Well-wishers gathered on Oct. 17 at Zhao's Beijing residence to remember a liberal-minded and well-loved leader who rose to the top of the ruling Chinese Communist Party at the 13th Party Congress in 1987.

"There were more than 20 people there around the time I went," an anonymous participant told RFA after marking the 96th anniversary of Zhao's birth. "I don't know how many went after that."

"There are two days every year, Oct. 17 and Jan. 17, which are his memorial days," the well-wisher said.

But 10 years after his death, the family still has no final resting place for Zhao's ashes, which they wish to bury alongside those of his wife Liang Boqi, who died in late 2013, a source close to the family told RFA.

"The reply was that they couldn't be interred together," the source. "They said they would consider it, but they are just dragging things out."

"Also, they have been told that there is no room in two public cemeteries within Beijing city limits," the source said. "This is probably because of [interference from] the highest level of leadership."

Twenty-six years after Zhao fell from power for adopting a too-liberal stance towards the 1989 student-led pro-democracy movement on Tiananamen Square, his remains are still politically sensitive for the administration of President Xi Jinping, the source said.

His ashes have remained until now at his former courtyard home at No. 6, Fuqiang alley since his death on Jan. 17, 2005.

"Actually, they say the cemeteries are full because they don't want him to be laid to rest anywhere in Beijing," the source said. "They're afraid that they will be the focus of some kind of public memorial event every year."

"They haven't responded to repeated requests from the family at all since [the grave-sweeping festival of] Qing Ming on April 5 this year."

The 1989 protests were sparked by a spontaneous outpouring of public mourning on Tiananmen Square following the April 22 state funeral of ousted former premimer Hu Yaobang, who was credited with overturning many of the injustices of the Cultural Revolution (1966-1976).

Zhao's former aide Bao Tong, who has been under house arrest in Beijing after serving a seven-year jail term in the wake of the Tiananmen protests, called on the authorities to grant the family's request.

"It is a dream of his children to have their parents interred together," Bao told RFA on Monday. "The leadership shouldn't be involved in these sorts of matters, where somebody's grave lies."

"There are more than a billion people in China; they can't decide where everybody's grave is going to go," he said. "The Communist Party wasn't founded to take care of such matters."

Bao hit out at the continuing taboo surrounding Zhao, whose name has been virtually erased from official records, saying that the party recently marked the centenary of the birth of Xi's father, revolutionary elder Xi Zhongxun.

"Why can they mark Xi Zhongxun's centenary ... but not the anniversary of Zhao Ziyang's birth?" Bao said. "Why are they commemorating a former deputy chairman of the National People's Congress standing committee, but not a former general secretary of the Communist Party?"

"I think the family's request to have him interred in Beijing is extremely reasonable; Zhao Ziyang spent the last 10 years of his working life in Beijing."

Reported by Qiao Long for RFA's Mandarin Service. Translated and written in English by Luisetta Mudie.