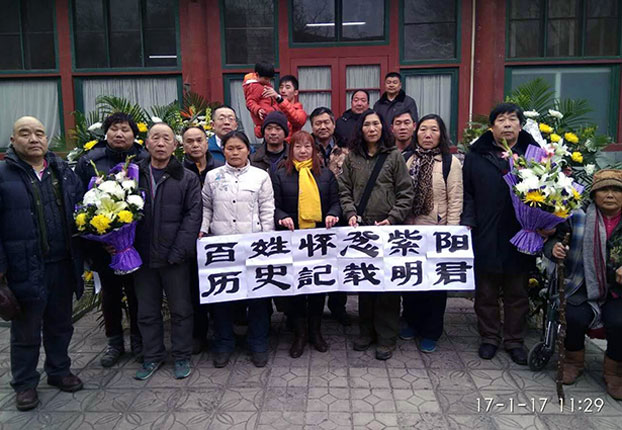 Hundreds of rights activists and petitioners converged on the home of late ousted Chinese premier Zhao Ziyang on Tuesday, marking the 12th anniversary of his death under house arrest.

Zhao’s family home in Beijing's Fuqiang Hutong was thrown open on Tuesday, with a constant stream of visitors coming to pay their respects to Zhao, who was purged for his sympathetic stance towards the 1989 Tiananmen pro-democracy movement, and his opposition to the use of force against the students.

Among them was Beijing housing rights activist Ni Yulan, recipient of the U.S. State Department's 2016 International Women of Courage award, who arrived with her husband to visit Zhao's shrine.

"Security is always tight on this date, and the [state security police] escorted us here, walking behind us all the way," Ni, who was left disabled by a beating she received in police custody, told RFA.

"When we got on the bus, they got on the bus; there were two plainclothes officers and a police officer in a marked car following the bus."

The courtyard of the Zhao family home was packed with people paying their respects, Ni said.

"There were also a few dozen police standing guard nearby," she said. "They didn't detain anyone at the scene, but they stopped journalists from interviewing people."

"We were allowed to go inside, right inside the courtyard; there were people who had brought fresh flowers and various gifts," Ni said. "People signed a guestbook and left messages after they had paid their respects."

Fellow Beijing rights activist Zhang Zhenmin estimated that several hundred people had visited while she was at the Zhao residence.

"There were a lot of state security police outside the front door, posted every few paces down the street, watching us," she said. "But when we got to the front door, someone let us in, and that's how we got inside."

Veteran rights activist Hu Jia said he had been prevented from going to pay his respects.

"When I went downstairs this morning to take out the trash ... I saw that there were more state security police on duty than usual," Hu said. "Normally there are three or four of them, but today there were seven or eight of them."

"The entire gatehouse for security guards was full of them, even the ones who don't usually show their faces," he said, adding that he was unable to leave his home to visit the Zhao memorial event.

Another person who attended the event but who asked not to be named said around 100 people were there when they went.

"People were coming in in small groups the whole time," the mourner said. "They weren't being stopped at the door, but there were plainclothes police and citizen security guards in red armbands."

Ordered not to go

Zhao's former top aide Bao Tong, who is himself under tight surveillance after serving a seven-year jail term in the wake of the 1989 military crackdown on unarmed civilians, said he was told outright not to go to the event.

"The relevant authorities told me not to go, and not to give interviews or write any articles on this topic," said Bao, who frequently pens eulogies to his former boss.

"This was very different from previous years, when they would just ask me if I planned to go," he said.

Bao said he chose not to go for fear of jeopardizing the event with a tight security presence.

"I think I would ruin the atmosphere if I went along," he said. "I want people to be able to commemorate Zhao without something stressful happening. I can always go another time."

Tiananmen Mothers member Zhang Xianling, who lost her 19-year-old son Wang Nan during the Tiananmen massacre, said she had also been ordered not to go.

"The authorities wouldn't let me go," Zhang said. "A bunch of police cars and plainclothes officers showed up in the compound at about 8.00 p.m. yesterday evening and told me not to go."

"They haven't let me go for four or five years now," she said. "The [ruling Chinese Communist Party] should be honored that so many people want to pay their respects to one of its former leaders."

Reported by Qiao Long for RFA's Mandarin Service, and by Wong Lok-to for the Cantonese Service. Translated and written in English by Luisetta Mudie.