Let The People Decide Whether to Remember Zhao Ziyang 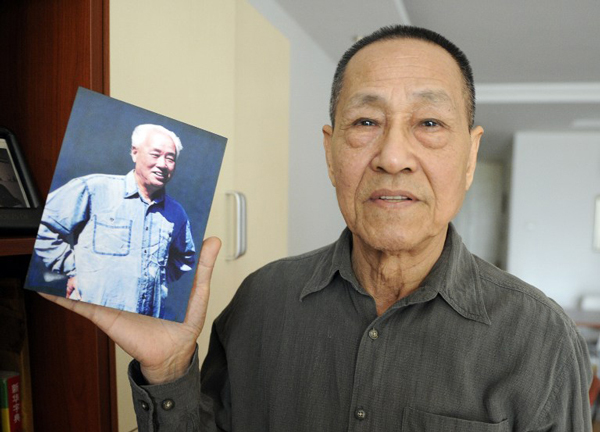 Bao Tong shows a photo of his former boss, Zhao Ziyang, a leading reformer and former secretary-general of the Chinese Communist Party, at his home in Beijing, Feb. 22, 2011.
AFP

January 17 is the tenth anniversary of the death of Zhao Ziyang, former secretary general of the Chinese Communist party.

More than 30 years ago, [late supreme leader] Mao Zedong tied the hands of China's farmers with the People's communes, while Zhao Ziyang proposed "autonomy for farmers," restoring them to a dominant position in agriculture.

Under the Soviet-style planned economy that was being pursued at the time, the markets were also severely restricted, so Zhao suggested that they should have their own "autonomy of enterprise" and be subject to neither government nor party.

Zhao Ziyang had attained a kind of enlightenment during the Cultural Revolution [1966-1976], and he emerged from it free of its ghosts and dogma.

He treated people like human beings, and he wanted everyone to become citizens in a commonwealth of the free. He cared about ordinary people, so naturally they cared about him, too.

Zhao Ziyang was ousted in the wake of the repression of June 4, 1989, by the power of [then supreme leader] Deng Xiaoping, who had become like God behind the scenes of the party and state. His decisions, including the bad ones, were often transmitted as unassailable dogma.

So it was that a strange phenomenon emerged. After the death of Zhao Ziyang, anyone who commemorated him was put under surveillance by the authorities.

One citizen, Yu Shiwen, was arrested and charged with a crime, stood trial and was sentenced to prison because of this. He is still in jail to this day.

This year also marks the 100th anniversary of the birth of [Zhao's ousted predecessor] Hu Yaobang.

There is some reason for everyone to hope that this year's commemoration of Hu Yaobang will receive the protection of the law and the support of the authorities.

People's shared memories, their discussions and their commemorations, whether they are known to each other or not, come under the heading of mental activity, personal expression and communication. There is no need for the government and party leadership to concern themselves with such things.

Guarding against it as if it were the enemy is ridiculous, and the use of state power to obstruct or repress it is illegal.

Religious belief, the expression of opinions and communication are all necessary to human civilization and its development.

Personal autonomy and intellectual freedom are the basis of the rule of law in a civilized society.

Unfortunately, ever since Mao Zedong decided that he alone had the power to decide everything, thought, speech, news and public opinion no longer belong to the whole of society. They have been reduced to the status of mere objects of dictatorship and control.

So the question of who will be remembered and who will not be remembered must be decided according to a specific benchmark, the design of which has been patented by certain specialist agencies, which alone have the right to change whenever they see fit.

Of course, this is utterly ridiculous and makes a mockery of the rule of law.

Everyone is equal before the law. The opinions of everyone, whether they are the designers or those being designed, should be equally tested by the facts and by time.

The decision about whether or not to commemorate someone is a matter for the individual's own right to think, and to free expression, and shouldn't be interfered with by the leadership or the ruling party.

Everyone, regardless of status, should be free to commemorate, to remember and to discuss any historical figure they like, such as Mao Zedong or [his wife and Gang of Four member] Jiang Qing, for example.

In countries where the rule of law prevails, these freedoms enjoy the protection of the law, and their violation isn't tolerated.

It isn't a normal part of life in such societies to police people's thoughts and monitor their opinions. If this is taken to be culture, then it is the culture of ignorance.

Not long ago, the fourth plenary session of the 18th Party Congress passed a resolution committing to the rule of law. This should be regarded as solemn, serious, authoritative and viable.

Now, people have good reason to expect that future commemorations, memories and discussions regarding Zhao Ziyang will no longer be subjected to censure or restriction, but instead will receive the protection of the law and respect from the authorities.

Bao Tong, political aide to the late ousted premier Zhao Ziyang, is currently under house arrest at his home in Beijing.