No More Speech Crimes: A Lasting Memorial to Zhao Ziyang 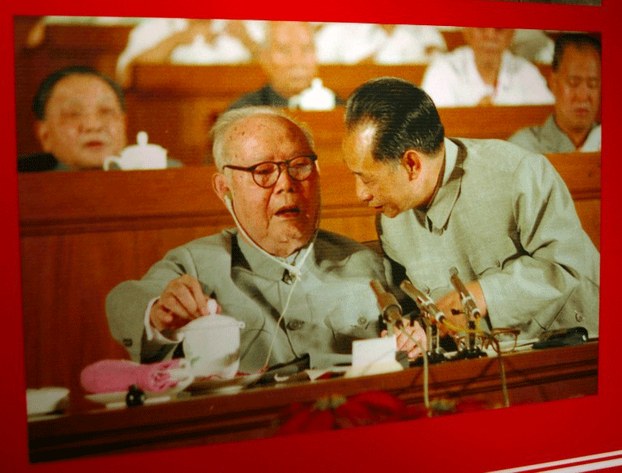 This Nov. 2, 2012 picture shows a 1982 displayed photo of Zhao Ziyang (R) talking to Ye Jianying, one of the founders of the Chinese Communist Party, with Hu Yaobang (back R) and Deng Xiaoping (back L). The photo was on display at a press center for a party congress in Beijing but was later replaced with one featuring Hu without Zhao.

A few days ago I wrote a few words to express my thoughts on Zhao Ziyang, whose legacy and love for the people continues in the hearts and minds of many.

His legacy can be found in tape recording on the progress of reforms made more than 30 years ago. Zhao Ziyang devoted all his energy to the progress of Chinese society. Everyone who shared his goal will without doubt wish to acknowledge it, continue to cooperate, and remember him.

For the past twenty-six years, the authorities have done everything they can to erase the name of Zhao Ziyang. But he remains in the memory of those who want to tell the truth about China's contemporary history.

His spirit endures in free communication, which is a form of commemoration for Zhao Ziyang, who consistently held different views from [late supreme leader] Deng Xiaoping, and who was treated as a criminal for them.

People have reason to be worried: In a system that doesn't rule out speech crime, how do we start to talk about anything? It would be a lasting memorial to Zhao Ziyang if we could resolve once and for all this big issue that remains for most people.

The Chinese tragedy that is speech crime has been with us for a long time. In recent times, it has propagated without end. At first, in the ranks of the party, all those who didn't agree with the opinions of the "core" leadership were sacrificed, one by one, on the altar of Bolshevik iron discipline.

Later, it also extended outside the party, so that non-party members who resolutely refused to accept the leadership of the party were sacrificed, one by one, to the dictatorship of the proletariat (also known as the people's democratic dictatorship).

Zhao Ziyang wasn't the first. Hu Yaobang was also sacrificed, as were Peng Dehuai and Xi Zhongxun before the Cultural Revolution. And it wasn't just confined to the party. Outside its ranks, the same thing happened to Zhang Bojun, Luo Longji and Chu Anping.

Nor was it confined to the upper echelons of party and government, but regular citizens Lin Zhao, Wang Shenxi and Li Jiulian were all sacrificed, too.

Neither is it confined to the past. Right now, Yu Shiwen, Gao Yu, Pu Zhiqiang and Guo Yushan are all behind bars...

This list of people accused of speech crimes could be much longer. It could include, you, me, him, everyone, endlessly, for as long we have a dictatorship in China that criminalizes words.

After Mao Zedong died, the words "don't let the tragedy repeat itself," were often heard within party ranks, but perhaps they were only saying it and didn't mean it.

Xi Zhongxun was never satisfied with just saying things. He witnessed many a process in which someone was accused of a crime for disagreeing with the core leadership.

During his tenure as executive vice chairman of the National People's Congress (NPC) standing committee, he concluded: "China needs a law to protect different opinions." Such was Xi's unique vision.

Everything he went through, the lessons he learned from the Chinese Communist Party before 1921, and those gained from the whole country after 1949, even from the Comintern movement of 1903, were all written in blood freshly shed by tens of thousands of people.

This was a problem that many people, from [early Russian Marxist Georgi] Plekhanov to Zhao Ziyang, wanted to solve, but without the use of force.

Xi Zhongxun, in his wisdom, came up with his once-and-for-all, easy-to-implement solution that would need no investment nor for anyone to get hurt: the "law to protect different opinions," that would ensure long-term peace and stability for the country.

The law to protect different opinions shouldn't just be regarded as a way of commemorating Zhao Ziyang, but as a necessity for the continued peaceful existence of every citizen of China.

Xi Zhongxun's political wisdom should be allowed to become common sense in government and in society.

Bao Tong, political aide to the late ousted premier Zhao Ziyang, is currently under house arrest at his home in Beijing.

More careful editing of captions needed to avoid such howlers in the future.

Error in the caption: That's Hu Yaobang in the foreground speaking to Ye Jianying, with Zhao Ziyang in the back right. But of course, even the fact that Zhao Ziyang is in the photo at all made them remove the photo from display.