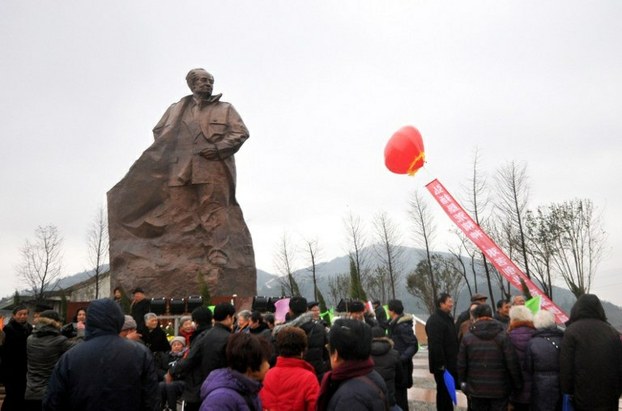 Crowds watch the unveiling of a statue of Hu Yaobang in Taizhou, Zhejiang province, in a file photo.

As the ruling Chinese Communist Party elite marked the centenary of a late ousted premier famed for reversing many of the injustices of the regime, police on Tiananmen Square detained a blind activist from Shanghai after he handed out leaflets protesting against government corruption.

In the highest-level public recognition of Hu Yaobang since his death sparked the 1989 Tiananmen Square protests, China's leaders marked the 100th anniversary of the former premier's birth on Friday at the Great Hall of the People in Beijing, official media reported.

Hu was ousted from the top job as general secretary of the Communist Party amid accusations of "bourgeois liberalism" in his handling of the 1989 student-led protests on Tiananmen Square.

His death of a heart attack in 1989 prompted a massive public outpouring of grief on Tiananmen Square, sparking several weeks of student-led pro-democracy protests and hunger strikes that were later ended amid a bloody military crackdown by the People's Liberation Army on the night of June 3 that year.

President Xi Jinping on Friday spoke of the former premier as "a loyal communist soldier, great proletarian revolutionist and statesman," and "an outstanding political worker of the military and prominent leader of the party," the official Xinhua news agency reported.

"To commemorate Hu Yaobang is to learn from his noble character, which was based on keeping the faith and being dedicated," Xi told the memorial event, adding: "The highest ideal is communism."

Meanwhile, just outside the venue, police were detaining blind Shanghai activist Chen Yongcheng, who said he was trying to "get the leaders' attention" by handing out leaflets.

Chen and fellow activists Hu Yizhong, Bao Changxing and Chen Rongda have been handing out leaflets in central Beijing for the past four days, he told RFA.

"Tiananmen Square is a symbol of the nation, and there are a lot of people around ... so that's why we wanted to come here; to make the leadership pay attention," said Chen who has taken part in previous public protests against official corruption, and who also campaigns for the separation of powers, an idea rejected out of hand by late supreme leader Deng Xiaoping, who toppled Hu Yaobang.

"I have been detained many times, and kidnapped eight times ... the government uses its power to commit crimes," Chen said. "That's why we wanted to come to where the real power is."

Gong Xinhua, a rights activist based in the eastern province of Jiangxi, said he had visited Hu's grave in Jiujiang city on Friday morning, but had left soon after arriving amid heavy police security.

"A couple of bus-loads of armed police came [to the cemetery] just after 10:00 a.m., maybe 60 or 70 of them," Gong told RFA. "Then a taxi-driver told me that maybe some important official was coming, maybe a leader from the central government, and that's why security was so tight."

He said around 50 people had gathered to leave offerings at the grave on Friday, and that they had all left quickly when they saw the armed police arrive.

Gong said Hu is still kindly remembered by many people

"We recognize Hu Yaobang as the conscience of the party," Gong said. "He actually served the people, so that the Communist Party would do a good job of governing China, and tried to make their lives better"

"Xi Jinping would do well to learn from his attitude," he added.

Song Ligong, a former professor at Hong Kong's City University, who has a special interest in Hu Yaobang, said Xi likely wants to assert his connection to the older generation of revolutionary elders within the party.

"This recognition means that a rehabilitation of Hu Yaobang is likely, and it might be an indicator of a reappraisal of June 4, 1989, but I think that's probably further away," Song said.

"I think that such a high-level memorial for Hu Yaobang isn't necessarily linked to [that] possibility."

The Communist Party currently bans public memorials marking the June 4 massacre, and has continued to ignore growing calls in China and from overseas for a reappraisal of the 1989 student protests, which it once styled a "counterrevolutionary rebellion."

The number of people killed when People's Liberation Army tanks and troops entered Beijing on the night of June 3-4, 1989, remains a mystery.

Beijing authorities once put the death toll at "nearly 300," but the central government has never issued an official toll or list of names, in spite of repeated calls by the Tiananmen Mothers victims' group.

Reported by Xin Lin for RFA's Mandarin Service, and by Wong Lok-to for the Cantonese Service. Translated and written in English by Luisetta Mudie.