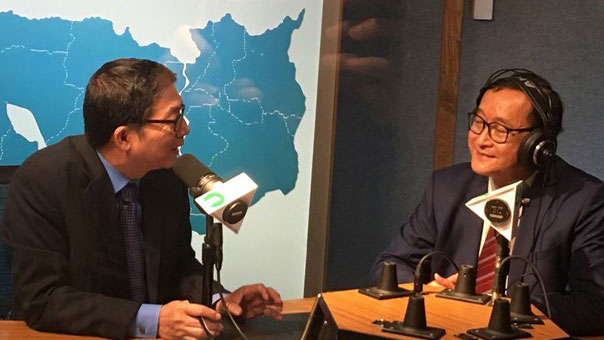 The acting president of the banned opposition Cambodia National Rescue Party (CNRP) Sam Rainsy said Friday he will lead a “tsunami” of supporters to arrest Prime Minister Hun Sen and “liberate” party leader Kem Sokha from detention upon his return to the country from self-imposed exile next month.

“I will lead the people to arrest Hun Sen and he will have no choice but to allow himself to be arrested,” Sam Rainsy told RFA’s Khmer Service, speaking of his plans to lead a “restoration of democracy” in Cambodia, following the arrest of Kem Sokha on charges of treason in September 2017 and the Supreme Court’s decision to ban the CNRP two months later over an alleged plot to topple the government.

“I am well-prepared physically and emotionally [for my return] and nothing has changed,” Sam Rainsy said during a call-in show with RFA on Friday.

“I will arrive in Cambodia on Nov. 9—I am 100 percent sure of that. I can’t detail what route I am going to take, but I can say that the road has already been paved for my repatriation.”

Sam Rainsy has urged supporters and members of the armed forces to join him on his return, but Hun Sen and other government leaders have vowed to arrest the CNRP chief as soon as he sets foot inside the country, where he is wanted on a number of charges and convictions widely seen as politically motivated—including for “plotting a coup” in connection with next month’s plan.

The opposition chief said that he will be met by a “tsunami” of supporters on his return, who will protect him from being arrested and imprisoned.

“I will maintain my freedom so that I can lead a movement by the people,” he said, adding that “my intention is to liberate Kem Sokha” from de facto house arrest in the capital Phnom Penh, while he awaits his trial.

Sam Rainsy said that Hun Sen’s crackdown had “left me no choice” but to organize the people to “stand up and demand democracy” through an independent election, adding that the government cannot be trusted to hold a fair ballot after the dissolution of his party.

In response to an RFA listener’s question about the likelihood that his plan would succeed, given the ruling party’s backing by both China and Vietnam, who have stepped into the vacuum left by Western nations following last year’s election, Sam Rainsy warned against underestimating the people of Cambodia.

“We shouldn’t give too much credit to foreigners,” he said, adding that “foreign governments can’t hold back the Cambodian people.”

Sam Rainsy also called on Cambodians both inside the country and abroad, including migrant workers in neighboring Thailand, to “unite” against Hun Sen.

The acting CNRP president’s comments came on the same day that the Phnom Penh Municipal Court announced that it had sentenced him and two other senior opposition officials, as well as a CNRP activist named Kong Mas, to 18 months each in prison for “incitement to commit a felony” in connection with the planned return.

Sam Rainsy has had 21 separate charges lodged against him, going back to 2008, which he dismisses as politically motivated. U.N. rights watchdogs have repeatedly cited lack of judicial independence as a major shortfall in Cambodia.

Kong Mas was present for the verdict, while Sam Rainsy and the other two CNRP officials were sentenced in absentia, according to Kong Mas’ lawyer, Sam Sokong.

“He has the right to express himself on social media,” he added, saying Kong Mas rejected the verdict and is considering an appeal.

Also on Friday, police in Oddor Meanchey province arrested CNRP activist Theng Samban on charges of “participating in acts of treason” for organizing supporters to accompany Sam Rainsy when he travels to Cambodia.

His wife, Kreng Phan, told RFA that around 20 police officers surrounded their home and used force to take the 60-year-old, who suffers from health problems, into custody.

“My husband is sick,” she said, adding that the arrest “was very brutal.”

Am Sam Ath, an official with Cambodian rights group Licadho, told RFA that Theng Samban’s arrest was part of a bid by authorities to intimidate opposition activists in advance of Sam Rainsy’s return.

Police have made multiple arrests of Sam Rainsy’s supporters in recent weeks, bringing to at least 48 the number of CNRP activists detained since the beginning of the year and nearly 184 the number subjected to interrogation over the same period, and prompting calls from Western governments and rights groups for an end to the mistreatment.

Cambodia government arrest a lot of Cambodians who, by law, criticized base on Democracy. Hun Sen threatened to fight Khmer-Australian,-American,-French on line, he never been arrested. What kind of country official is Hun Sen? Crime, Robberies are very high in Cambodia police rarely catch them. Not really safe to visit Cambodia.

That's not a bad idea and he will get a lot of supports for that. Hun Sen and all five stars family members and relatives will loose all stars from their shoulders soon