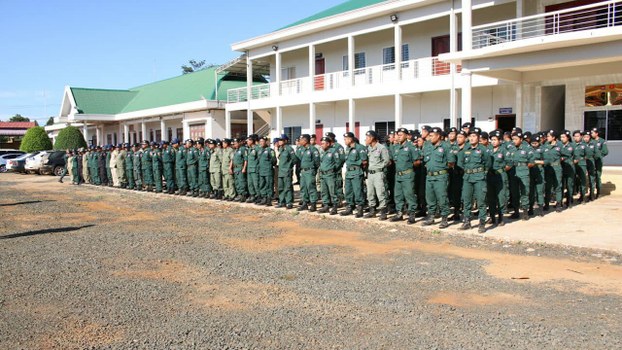 Authorities in Cambodia’s border provinces of Battambang and Mondulkiri have launched anti-protest training initiatives for members of the security forces, as the clock winds down on the planned return from exile next month of Sam Rainsy, the acting president of the country’s banned opposition party.

The training sessions in Battambang, on Cambodia’s border of Thailand, and Mondulkiri, bordering Vietnam, are being carried out in accordance with orders from the National Police Commissioner and the Interior Ministry, and include tactics on the suppression of mass demonstrations with the purpose of “maintaining security, order, and peace,” according to officials.

Major General Lor Sokha, the commissioner of the Mondulkiri Provincial Police, was quoted on the General Commissariat of National Police website as saying that 133 police officers had begun receiving training on Tuesday to reinforce the skills they require to “crack down on demonstrations.”

Four days of similar training, ending Thursday, were held in Battambang, according to the Facebook page of the Battambang Provincial Police Commissariat, which quoted commissioner Major General Ouch Sokhon as saying that the exercises would ensure that police are ready to “receive and enforce orders” from the government.

Drills in the two provinces followed training on Oct. 16 for 100 police officers in Kandal province, which surrounds Cambodia’s capital Phnom Penh, and came after the opposition Cambodia National Rescue Party (CNRP) announced in August the Sam Rainsy and other leaders would return to the country on Nov. 9—most likely by land—to lead a “restoration of democracy” through nonviolent protests.

Sam Rainsy fled Cambodia in late 2015 to avoid a string of charges and convictions he says were politically motivated and, since then, authorities arrested CNRP Kem Sokha on charges of treason in September 2017, while the Supreme Court dissolved the party two months later over an alleged plot to topple the government.

The ban on the political opposition, along with a wider crackdown by Prime Minister Hun Sen on NGOs and the independent media, paved the way for his ruling Cambodian People’s Party (CPP) to win all 125 seats in parliament in the country’s July 2018 general election.

The CNRP has called on its supporters, particularly among Cambodian migrant workers in Thailand, and members of the armed forces to join Sam Rainsy on his return, slated for Nov. 9, but Hun Sen and other government leaders have vowed to arrest him as soon as he enters the country.

Attempts by RFA’s Khmer Service to reach the spokesperson of the General Commissariat of National Police, Chhay Kimkhoeun, and Commissioner General of the National Police, Neth Savoeun, for comment on the police training were unsuccessful on Thursday.

But Neth Savoeun was quoted by the Phnom Penh Post as saying that the police commissariat of each province must provide training to its officers to ensure that they are ready to shut down demonstrations by any group “causing insecurity to overthrow the government.”

Ly Ratanak Reaksmey, a CNRP working group leader in Thailand, told RFA that such training is an example of government “cruelty,” but said that Cambodian migrant workers and other supporters in Cambodia “will not be intimidated,” and plan to escort Sam Rainsy home next month.

“We in Thailand are not afraid, and we have already prepared ourselves for this repatriation,” he said.

“We are going back to Cambodia, not to topple Hun Sen’s government, but to demand that he act responsibly and … comply with democratic principles.”

Korn Savang, a monitoring coordinator with election watchdog COMFREL, told RFA that a government crackdown on protesters who are supporters of the opposition will cause Cambodians to suffer and become victims, much like when authorities responded with force during demonstrations in Phnom Penh over perceived ballot fraud following the country’s 2013 general elections.

He said Cambodia is not in a state of emergency and that the government has no right to resolve a political dispute by deploying security forces.

“I call on politicians from all sides to hold talks,” he said. “Forces should only be used to maintain security for our population.”

Government spokesperson Phay Siphan has regularly stated that if authorities believe Sam Rainsy’s return to be part of a coup attempt, security forces will be deployed to “suppress” or “smash” him and his supporters.

Reports of the police training also come as CNRP activists in Banteay Meanchey province, along the border with Thailand, said that provincial authorities had stepped up a campaign of intimidation against them, particularly those living in districts at the nation’s boundary.

Sao Poleak, a former CNRP elected councilor of the province’s O Chrov district who is currently in hiding in Thailand, said that district authorities have coordinated with local police to pressure opposition activists into giving themselves up and renouncing their support for Sam Rainsy.

“They use all kinds of tactics to threaten people to refrain from taking part in political activities,” he said.

“They have surveillance units in each village, including soldiers and members of the police force,” he said, likening the tactics to those used by the Khmer Rouge regime, whose leadership oversaw the killing of nearly two million Cambodians during its 1975-79 reign of terror.

Soeung Senkarona, a spokesperson for local rights group ADHOC, said he is “really concerned with the present tension within the political environment” in Cambodia, and said he expects “further restrictions.”

“The fact that the authorities are doing this will cause concern within the international community, due to the shrinking space of human rights,” he said.

Also on Thursday, Interior Minister Sar Kheng issued an order extending an order to arrest any CNRP activists or supporters who say they will join Sam Rainsy’s return, calling the opposition leader’s plan an “attempt to destroy peace” in Cambodia.

He said that Sam Rainsy’s call on the armed forces to disobey orders and an earlier comment he made suggesting that King Norodom Sihamoni is “Hun Sen’s puppet” are “inexcusable” and cannot be considered part of a peaceful democratic political struggle.

“[Sam Rainsy] is returning to destroy peace,” he said while speaking at a ceremony to announce a government initiative to combat human trafficking in Phnom Penh.

Mao Vibol, a CNRP activist and the former head of CNRP operations for Svay Rieng province, who is now in hiding in Thailand, said Sar Kheng’s plan to arrest Sam Rainsy supporters “is in contradiction to our constitution, which stipulates that citizens are entitled to join in political activities.”

“This will cause people further suffering, and make them no longer fear the authorities,” he said.

Meanwhile, CNRP vice president Eng Chhay Eang told RFA that the opposition is in negotiations with Thai authorities to ensure that party leaders are able to use Thailand to enter Cambodia via the border, days after immigration police there refused to allow Mu Sochua, another CNRP vice president, into the country to assist in preparations for Sam Rainsy’s return.

Speaking from an undisclosed location, Eng Chhay Eang said the banning of Mu Sochua by Thai authorities—who said her presence could “lead to social turmoil or affect security”—was a “temporary decision” that “can be changed soon,” without providing further details.

“We want to travel by crossing the Thai-Cambodia border into Cambodia—we have not changed our plan,” he said.

“We are now conducting diplomatic talks and making other necessary arrangements with the Thai government.”

Hun Sen has been counteracting efforts by Sam Rainsy and other CNRP leaders to gather the support of the international community by seeking the cooperation of neighboring countries to ensure that their return will be prevented, and Laos has reportedly agreed to take “strict measures” against any opposition officials who attempt to enter Cambodia through its territory.

Polices arrested who expressed their opinion but NOT who committed crime. How communist Chinese immigrants and tourists can have gun and murdered each others inside Cambodia. They are not served prison time in Cambodia.
Safety for Tourists in Cambodia is NOT guarantied.
Gun and ammunition donated by China means Cambodia is not safe again.

Hold dictator HSen accountable and we approve this message.

Because,this fascist dictator Hun Sen's so worries about the opposition party leaders return home with million of khmer pple companion their beloved leader come to rescue the EBA?GPS sanctions coming,and restore the DEMOCRACY system,abolished its opposition political top contender CCambodian National Rescue Party"CNRP"before pm election coming on July 29,2018,to avoid lose pm election with robbed all their 55 seats parliamentary+robbed 500 districts/communes+10,000 opposition party leaders been ripoff by unofficial govm't as their+arrested their leader Kem Sokha put into prison by politic motivation,that has been destroyed by fascist Hun Sen unofficial govm't who endorsed by north Vietnam commie foot soldiers as their puppet govm't in the last 40+years oppressive.That why made this badass dictator Hun Sen fears the opposition leader to return home.So many countries around the world called this fascist regime are the longest dictator ruler in southeast Asian hemisphere.Its calls unofficial election,unofficial pm,unofficial govm't,unrecognized by international community,"election by one-horse-race"without its top opposition party involved,because dictator fears to lose pm election that why he abolished the top opposition party"shame on thug".

First, Cambodia. Then Laos. Then onto Vietnam. The people are fed up of tyranny and oppression. The time is now.

What goes up will come down. It's just a matter of time. It's the Law of Nature.