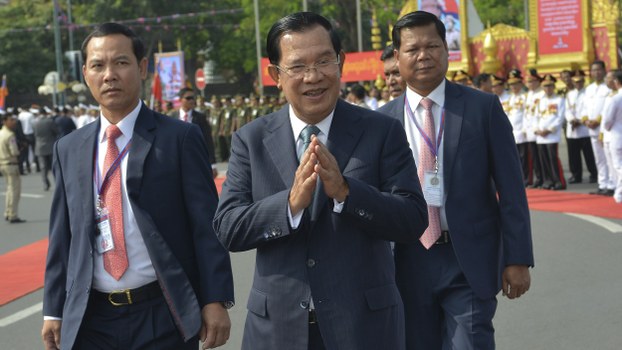 Cambodian Prime Minister Hun Sen’s new “Thank You Peace” slogan campaign is a sleight of hand trick meant to “divert public attention” from his abuse of power and the constitution to further his personal interests, a political analyst said Thursday.

Hun Sen on Thursday expressed thanks to supporters of the campaign, which he said does not oppose any group and demonstrates how stability has allowed Cambodia to develop under his 35-year rule.

“I believe that peace is priceless today and will continue to be in the future. All people need peace, except for terrorists who seek to destroy it,” he added, in a thinly veiled reference to supporters of the now-dissolved opposition Cambodia National Rescue Party (CNRP), several of whom have been detained in recent months amid accusations that they seek to overthrow his government.

In an audio message leaked to social media, Hun Sen also called on all government institutions and schools to promote the slogan as part of a bid to make Cambodians everywhere understand the value of peace.

“The slogan’s meaning does not negatively impact anyone, so it should be displayed over the entrance of every building,” he said in the audio message.

“The slogan is vital because we want everyone to love peace. Our achievements to date came from peace.”

Many institutions have already begun putting banners of the slogan on display, according to a report by the Phnom Penh Post, which also cited Kin Phea, the director-general of the International Relations Institute at the Royal Academy of Cambodia, as saying there is nothing wrong with Hun Sen’s order, as peace was the root cause of and a prerequisite for development in the country.

However, political analyst Kim Sok told RFA’s Khmer Service on Thursday that Cambodia and its people do not enjoy peace, in part due to the country’s ongoing political crisis, which evolved out of the Supreme Court’s decision to ban the CNRP in November 2017 for its role in an alleged plot of treason.

“The slogan amounts to a fake peace symbol,” he said, adding that “the people have nowhere these days to seek justice.”

The move to dissolve the CNRP was part of a wider crackdown by Hun Sen on the political opposition, NGOs, and the independent media that paved the way for his ruling Cambodian People’s Party (CPP) to win all 125 seats in parliament in the country’s July 2018 general election.

Since the election, authorities have detained several CNRP activists over allegations of “treason” and restricted or surveilled others, while appearing to turn a blind eye to physical assaults against party supporters by unknown assailants believed to be associated with the CPP.

Meanwhile, the ongoing crackdown has drawn international condemnation, including from the European Union, which will make a decision in February about whether to withdraw Cambodia’s tariff-free access to its marketplace under the Everything But Arms (EBA) scheme for developing countries.

According to Kim Sok, who lives in self-imposed exile in Finland to avoid a conviction he says is politically motivated, Hun Sen’s campaign seeks to “divert public attention” while he continues to “abuse his power and the constitution” for his personal interests.

The Phnom Penh Post also quoted social analyst Meas Nee as saying that peace in Cambodia “seems to be only for the rulers and the ruling party, but not for the people.”

“Whether it is peace, social justice, democracy or human rights, it is not the government that measures it but the people,” he said.

“Therefore, if the public feels that ‘peace’ has not been fully achieved, then the government’s definition is mere political demagogy.”

On Nov. 12, the EU warned in a preliminary report that Cambodia has not taken enough measures to prevent a withdrawal of its EBA status, noting the country’s further deterioration of civil, political, labor, social, and cultural rights since the launch of a review process in February last year.

Last month, in a statement accompanying its official response to the report, which was not made public, Cambodia’s Ministry of Foreign Affairs said that, ahead of an EU decision on the matter in February, it expects that the bloc will take into consideration “the government’s good faith efforts to implement all the relevant international conventions under the EBA regulations.”

The ministry’s statement was in stark contrast to recent comments from Hun Sen, who despite warnings from civil society that loss of EBA status would devastate Cambodia’s working class, has said he has no interest in meeting the EU’s demands.

Cambodian Confederation of Unions President Rong Chhun plans to hold a press conference on Friday to discuss his “strategy to maintain EBA status,” during which he will announce the results of a campaign to collect thumbprints from workers petitioning Hun Sen to prevent the loss of the preferential trade status.

Peace is a relative term for a dictator. Hun Sen will obfuscate the facts to show his reign of terror in the name of "Peace". True peace runs parallel with true democracy; something that escapes this dictator.

Comparing PhnomPenh city buses: Korea, Japan and Chinese made: Chinese Safety is the lowest they are not BYD brand. BYD is top Chinese brand even US use them. Chinese buses use diesel which pollute air, kill slowly Cambodians. Hun Sen can go medical check up at Singapore, poor Cambodians died like cat or dog.