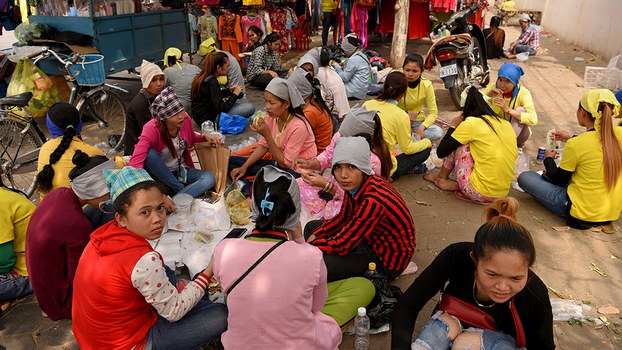 Cambodian workers sit down for lunch during break time in front of a factory in Phnom Penh, Feb. 12, 2019.

Cambodia’s government on Thursday said it had responded to a list of concerns from the European Union that could lead to the suspension of its tariff-free access to the bloc’s markets if it fails to take drastic action to improve the country’s rights record.

In a Nov. 12 preliminary report, the EU warned that Cambodia has not taken enough measures to prevent a withdrawal of its Everything But Arms (EBA) status—which gives developing nations tariff-free access to the EU’s markets for all products except arms—noting the country’s further deterioration of civil, political, labor, social, and cultural rights since the launch of a review process in February.

Cambodia had until Thursday to respond to the report, which the EU will now finalize and make a decision in February 2020 on whether to end preferential trade status for the Southeast Asian nation.

“The final Response is a comprehensive report on the actions and measures undertaken by the Royal Government to respond to all the areas of concerns of the European Commission [the EU’s executive branch], in particular with respect to political participation, land rights, freedom of expression and freedom of association,” Cambodia’s Ministry of Foreign Affairs said in a statement Thursday.

“The Royal Government expects that the European Commission will take into consideration the government’s good faith efforts to implement all the relevant international conventions under the EBA regulations, the potential social impact of nearly one million female workers and the indirect effect on families and relatives supported by these workers’ wages, as well as respecting the principles of sovereignty and non-interference into Cambodia’s internal affairs.”

The ministry’s statement, which was not made public, was in stark contrast to recent comments from Prime Minister Hun Sen, who despite warnings from civil society that loss of EBA status would devastate Cambodia’s working class, has said he has no interest in meeting the EU’s demands.

Cambodia is the second-largest beneficiary of EBA trade preferences, accounting for more than 18 percent of all imports to the EU market under the EBA scheme in 2018.

Clothing and textiles—a crucial industry in Cambodia that employs around one million people—account for around 75 percent of EU imports from the Southeast Asian nation.

The EU launched the process to strip Cambodia of its preferential trade terms following the arrest of opposition Cambodia National Rescue Party (CNRP) President Kem Sokha in September 2017 and the Supreme Court’s decision to ban his party for its role in an alleged plot to topple the government two months later.

Speaking to RFA’s Khmer Service on Thursday, social and political analyst Meas Nee noted that when Cambodia accepted EBA status, the government promised to honor conditions attached to the scheme that included improvements to human rights and democracy.

“We should all look at the requirements listed as part of the EBA offer to understand whether such conditions actually interfere with Cambodia’s sovereignty or not,” he said, referring to the Ministry of Foreign Affairs’ request that the EU maintain the country’s EBA status while refraining from interfering in its politics and sovereignty.

Moeun Tola, a human rights campaigner and the executive director of the Center for Alliance of Labor and Human Rights (CENTRAL), told RFA that the conditions raised by the EU only require the government to implement Cambodia’s existing law.

He noted that Cambodia’s government has adopted many international treaties into national law and should respect the country’s constitution by adhering to those provisions.

Ministry of Foreign Affairs spokesman Kuy Kuong on Thursday refused to comment further on the government’s response to the EU preliminary report when contacted by RFA.

No one is above the law. EU must punish as
human rights, freedom of speech, expression in Cambodia are abuse. Consumers in EU, USA, Australia who love democracy,..., please, do not buy Cambodia products

The EU needs to be strong as HS will never be sincere as he has shown for the last 20+ years which he has used only to consolidate power - never to support democracy. If you take his threats seriously, you just play his game. He is a bully and thrives on weakness.