Cambodia Cracking Down on Noodle Dinners Attended by Opposition Supporters 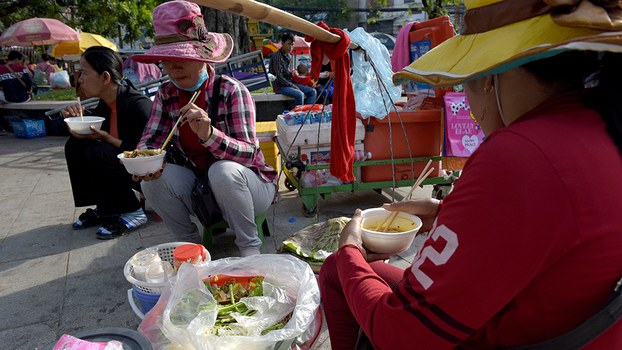 Authorities in Cambodia are cracking down on noodle dinners attended by supporters of the banned opposition Cambodia National Rescue Party (CNRP), in what analysts and rights groups say signals political paranoia on the part of Prime Minister and his ruling Cambodian People’s Party (CPP).

On Thursday, some 30 police officers descended on a noodle dinner in Treal commune’s Prey village, in Banteay Meanchey province’s Svay Chek district, as around 100 people gathered as part of a ceremony to honor their ancestors, according to former Svay Chek CNRP official Yath Pirum.

Diners were compelled to finish their meals, he told RFA’s Khmer Service, noting that around 10 of the attendees were formerly elected CNRP commune councilors who were forced to give up their seats after the Supreme Court banned the party in November 2017 for its role in an alleged plot to topple the government.

“We were eating when the police came in by force, causing some of our people to become terrified and try to leave,” he said.

“I strongly condemn such acts by the police. This kind of intimidation is absolutely unacceptable. Are we criminals or terrorists, that we be treated like that? Our people gathered to hold a ritual and traditional ceremony, and it’s sad that we were treated this way.”

Chhay Kim Khoeun, a spokesman for the National Police, told RFA there is “no policy in place ordering local authorities to prevent people from gathering for noodles” in their villages or their homes, and insisted that the police in Prey village were on a routine patrol to provide security and maintain public order.

“Police are at work 24 hours a day, and my forces are deployed to protect the people at all times,” he said.

“We carry out regular patrols in the villages—this is something we call ‘business as usual.’ We didn’t single out the noodle dinner as something that required special attention. I think those people were simply frightened by the police presence.”

Thursday’s incident came just two days after another group of around 100 CNRP activists in Poipet were also harassed and questioned by police while gathering for a noodle dinner.

In recent weeks, 35 former CNRP officials and activists have been summoned by the Battambang Provincial Court over violating the ban on the party.

To date, 26 have appeared at the court—several of whom told RFA they were questioned over being seen in public eating together last year at a noodle shop run by the former CNRP chief of O’Cha commune, Sin Rozeth, or had met for noodles at the home of CNRP executive director for Battambang, Chea Chiv.

At least 35 others have been summoned for questioning in Kampong Thom province after they expressed support in social media posts for CNRP President Kem Sokha, who is under de facto house arrest while being investigated for “treason,” and acting CNRP President Sam Rainsy, who lives in self-imposed exile in France.

On Thursday, Sam Chankea, an official with local rights group Adhoc in Banteay Meanchey, told RFA that while gathering for noodles is not illegal, police harassment is.

Under the constitution, he added, Cambodians are entitled to freedom of expression and assembly, and are provided with the right to engage in political activities.

“Their rights are protected by the constitution—any kind of peaceful gathering or socializing is healthy,” he said.

“The people shall enjoy these rights without any restriction.”

Political analyst Kim Sok said the government is afraid that the public will form an opposition movement in response to worsening human rights conditions and democratic rollbacks.

“But the government is not too paranoid that they will refrain from crushing any movement they view as a threat,” he warned.

“They will do anything to stop people from challenging their unpopular power.”

Brad Adams, New York-based Human Rights Watch’s Asia director, told RFA that authorities might think they can get away with harassing activists in more remote parts of Cambodia because they are “not people that diplomats usually know personally.”

“The fact that they’re doing this at the provincial level … is probably an attempt to avoid doing it too openly in Phnom Penh, where diplomats and the media [are watching], but Cambodia now has Facebook and a lot of internet connectivity, so they can’t hide this very well,” he said.

“This is a very, very clumsy attempt to try to scare people into ending their opposition to the government.”

Adams said that when the government reverts to these kinds of scare tactics, “it’s because Hun Sen is feeling very insecure and paranoid.”

“I guess he realizes that he’s failed in his normal divide-and-rule policy,” he said.

“He’s been trying for almost two years to divide Sam Rainsy and Kem Sokha and all of their followers into competing camps, but he’s failed because they’ve—for the most part—stuck together. I guess this is an attempt to try to divide them at the grassroots level.”