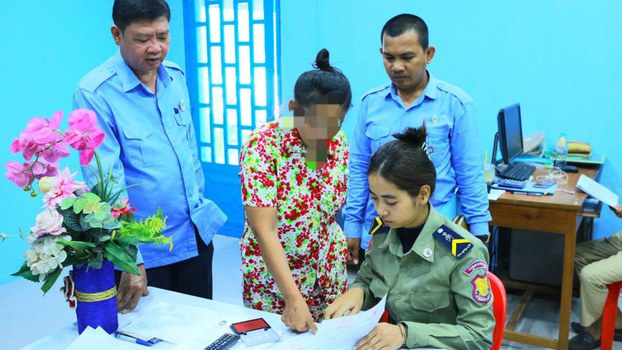 The mother of 'Tevy' thumbprints a document before being released from prison in Phnom Penh, Feb. 28, 2020.

A Cambodian court has released from prison the mother of a five-month old girl who died while being held with her at a correction facility in the capital Phnom Penh, a rights group said Friday, while an investigation into the incident continues.

Tevy—whose name has been changed to hide her identity—died on Jan. 26 from “pneumonia and severe malnutrition” after sustaining a thigh bone fracture eight days earlier in Correctional Centre 2 (CC2), where her mother was sent for pre-trial detention in mid-2019 for alleged possession of U.S. $2.50 worth of methamphetamine while eight months pregnant.

On Feb. 25, after spending more than eight months in pre-trial detention, the mother was convicted of drug trafficking and handed a punishment of two years in prison, but was released by the presiding judge with a suspended jail term for the remainder of her sentence, the Cambodian Human Rights Committee (CHRC) said in a statement.

“The Cambodian Human Rights Committee hopes that the woman who was released today will behave, end her involvement with drugs, and become a good citizen,” the group said.

“The committee will continue pay attention to the cases of women who have children living in jail with them to ensure that they are provided access to their full rights according to international standards.”

While it was unclear how the infant had been injured, local rights group Licadho said in mid-February that she was treated for the thigh bone fracture at the National Children’s Hospital before being sent back to CC2, despite prison staff asking if she and her mother could stay overnight for observation.

Over the next week, Tevy’s mother noticed that the baby had a fever and would not stop coughing, but a follow up appointment did not result in any further treatment or a refill of the medicine she had been prescribed. By Jan. 25, Tevy was struggling to breathe and transferred to the Khmer-Soviet Friendship Hospital, where doctors tried to clear her lungs of mucus, but she died the following morning.

Licadho noted that even though she was in the late stages of pregnancy, Tevy’s mother was never provided a lawyer and unaware of her right to apply for bail, saying that the girl’s death “once again illustrates the urgent need for authorities to prioritize bail for mothers with children” and urging authorities to “take immediate steps to ensure that this never happens again.”

Licadho’s senior investigator, Am Sam Ath, told RFA’s Khmer Service at the time that Tevy’s death “raised several questions,” and suggested that the hospitals she was treated at failed to cooperate with the country’s General Department of Prisons to adequately care for her.

On Friday, CHRC spokesman Chhin Malin told RFA that the Department of Prisons is investigating the incident as a result of malnutrition and disease.

Am Sam Ath welcomed the decision to release Tevy’s mother, but said he is saddened by the death of the child.

He asked the court to undergo careful consideration of whether to proceed to trial with cases that involve pregnant women and small children. Should it be determined that such cases proceed, the court should do so quickly, while ensuring that the rights of the defendants are protected, he said.

“We applaud the Cambodian Human Rights Committee for monitoring and providing assistance to women who are jailed [while pregnant or with small children],” Am Sam Ath added.

According to Licadho, there are currently 103 children and 43 pregnant women incarcerated in the 18 prisons the group monitors—numbers it said have nearly doubled since Jan. 1, 2017, when authorities declared a “war on drugs” in Cambodia.

CC2—the only prison in Cambodia built to hold women and children—has an official capacity of 350 inmates, but currently holds 1,850 detainees.

Prime Minister Hun Sen, who first called in 2015 for amnesty for pregnant women and mothers incarcerated with young children, urged the Ministries of Justice and Women’s Affairs to review the situation of women in pre-trial detention in February last year, citing the harsh conditions they face in prison.

The release of prisoner lady whose her 5 years old died in prison is not enough. One baby life costs less than a dog. This shows how Hun Sen government treat him who is innocent.