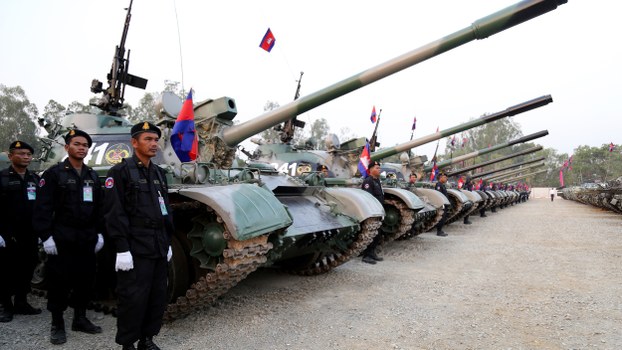 Cambodian soldiers stand next to tanks during a ceremony marking the 20th anniversary of the formation of Cambodian Infantry Army in Phnom Penh, Jan. 24, 2019.

Cambodia’s Prime Minister Hun Sen on Monday ordered the military to “attack” exiled leaders of the opposition Cambodia National Rescue Party (CNRP) if they enter the country as planned next month to lead protests against his rule, as authorities continued a crackdown on the party’s supporters.

Speaking at a ceremony in the capital Phnom Penh to mark the graduation of exceptional high school students, Hun Sen ordered defense minister Tea Banh to deploy all forces and “state-of-the-art weapons” to prevent the repatriation of CNRP leaders, including acting president Sam Rainsy, who has vowed to return on Nov. 9 to lead a “restoration of democracy” in the country.

“Attack them wherever you see them—you don’t need arrest warrants at all,” he said, adding that “All armed forces are authorized to carry out this attack.”

“Our troops should be deployed with all kinds of weapons. This is not a normal demonstration or protest—it has become an armed conflict.”

Hun Sen also reiterated his call for the arrest of CNRP supporters and participants of the planned return.

He said that Sam Rainsy had “crossed a red line” by referring to King Norodom Sihamoni as Hun Sen’s “puppet” in an interview—which led to the opposition chief’s conviction for “insulting the king” in absentia—and called it part of a “coup d’état that cannot be tolerated.”

“Those who are involved in this, don’t think that the government is violating your rights—you have already crossed a red line,” he said.

“So whenever [the military] see them, just arrest them, one by one.”

Lastly, the prime minister warned Cambodian migrant workers in Thailand to refrain from offering their support to the CNRP, threatening that he could have them “arrested and sent back to Cambodia for conviction,” without elaborating.

Shortly after Hun Sen made his remarks, Tea Banh confirmed to RFA’s Khmer Service that he will be deploying troops “in all directions so as to protect our nation,” although he did not provide any details on how many would be sent and to where.

“They all are ready to suppress by all means those who stir chaos and insecurity for our nation,” he said.

“We will use all kinds of weapons at the points of incident … so as to suppress, prevent or even obliterate or smash them all!”

Speaking to RFA on Monday, Morn Phalla, the head of the CNRP’s operations in Phnom Penh who fled Cambodia after the country’s Supreme Court dissolved the party in November 2017 for its role in an alleged plot to topple the government, called Hun Sen an “authoritarian ruler” whose violations of the law and human rights cannot be overlooked by the international community.

“I am striving for the cause of democracy in accordance with democratic means and through the use of nonviolence,” Morn Phalla said, adding that “there is nothing for me to fear” in joining with Sam Rainsy on his return to Cambodia.

“Our people want positive change through nonviolence. Therefore, we are ready to join in Sam Rainsy’s repatriation so that we can achieve that goal.”

Soeung Sen Karona, a spokesperson for Cambodian rights group ADHOC, told RFA that Cambodia had already endured decades of civil war during the bloody era of the Khmer Rouge, whose leadership oversaw the killing of nearly two million people during its 1975-79 reign of terror.

“I don’t want to see any violence occurring due to political conflicts,” he said.

“What I really want to see are peaceful political solutions. I want to see our politicians act maturely in using a democratic process to solve the social and political crisis.”

Hun Sen’s order for the military to attack CNRP leaders on sight came as authorities in Cambodia arrested another former CNRP official on Monday and charged six others for allegedly aiding a plot to overthrow the government.

Tith Sophat, a former elected commune official in Phnom Penh, was arrested by three police officers at her home at around 2:00 p.m., another former CNRP official in the capital named Khin Reoun told RFA.

“Nobody would have known, except that one of her grandchildren ran to tell a neighbor about the arrest,” he said.

“This arrest is a threat against the activities of the CNRP, but I believe it will cause more pain for the people of Cambodia.”

Tith Sophat was among five members of the CNRP listed on a warrant issued by the Phnom Penh Municipal Court, which also included activists Kruy Sokhemrin, Seng Khorn, Reoung Samnang, and Khin Sok. All five have been charged with being complicit in an act of treason for mobilizing people in support of Sam Rainsy’s return.

Am Sam Ath, an official with Cambodian right group Licadho, called the arrests and charges “political intimidation, rather than the enforcement of the law.”

“The expression of political beliefs is protected by the constitution—what the [government] is doing against the opposition is a restriction of freedom,” he said, adding that such reversals of democracy further alienate Cambodia from the West, which has leveled sanctions against the government since the election.

Police have made multiple arrests in recent weeks, bringing to at least 32 the number of CNRP activists detained since the beginning of the year and at least 174 the number subjected to interrogation over the same period, and prompting calls from Western governments and rights groups for an end to the mistreatment. At least five activists are currently in hiding amid the crackdown.

Hun Sen is clearly mad with powers. He is unstable and a danger to people of Cambodia. Hun Sen is a puppet of Vietnam and is illegitimate. Hun Sen must declare autonomy for Khmers against an illegitimate dictator and occupiers of Khmer land.

Hun Sen is reverting back to his days as a Khmer Rouge soldier. Eliminate your opponent at all costs which includes murdering your own people. This crazed dictator usurped his position and now he is deploying weapons to maintain his control. Civil war is going to break out and countless innocent civilians are the pawns in this political struggle. The West needs to step in and push out China and work to restore real democracy to my mother country.