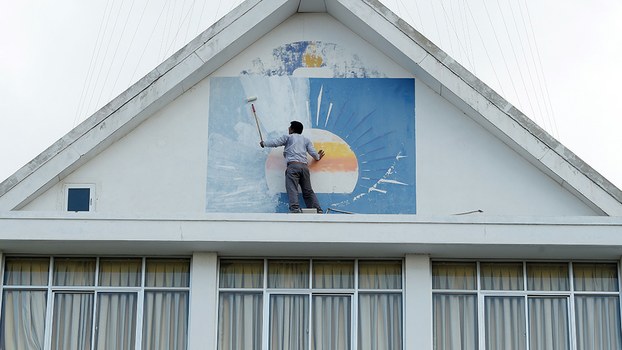 A supporter of the opposition Cambodia National Rescue Party (CNRP) paints over the party logo at party headquarters in Phnom Penh, Nov. 18, 2017.

A dozen members of Cambodia’s banned opposition party are still awaiting justice months after they were attacked by unknown assailants following party chief Sam Rainsy’s announcement of plans to return home from exile, they said Tuesday.

In August, Sam Rainsy, the acting president of the Cambodia National Rescue Party (CNRP), said he would return home on Nov. 9 to lead a restoration of democracy in the country through peaceful protests, but was blocked from doing so and forced to return to Paris, where he has lived since 2015 to avoid a string of charges and convictions he says are politically motivated.

Following the announcement, 12 CNRP activists and supporters were targeted in attacks over the span of a few weeks in what opposition officials said was a campaign orchestrated by the ruling Cambodian People’s Party (CPP) to sow fear within the community. Police have yet to arrest any suspects in the cases.

On Tuesday, CNRP activist Sin Bona told RFA’s Khmer Service he has little hope that authorities will act on his case, stemming from an attack in broad daylight on Sept. 25 while he rode his motorbike on a street in the capital Phnom Penh by two men wielding a metal pipe and a handgun.

The assault left him with a broken arm that cannot be healed, but he said that police are unwilling to carry out a proper investigation.

“The authorities never identified me as a plaintiff” despite filing a complaint shortly after the attack, he said, urging police to punish those responsible for assaulting him.

“I think that if the government wants to arrest those responsible, it isn’t difficult for them because they have enough evidence,” he added.

Sin Bona’s daughter, Bona Sophea, told RFA at the time of the attack that her father “has no dispute with anyone” and may have been targeted because of his former role as an elected commune official with the CNRP, who was forced to give up his position after Cambodia’s Supreme Court banned the party in November 2017 for its role in an alleged plot to topple Prime Minister Hun Sen’s government.

The move against the political opposition, along with a wider crackdown by Hun Sen on NGOs and the independent media, paved the way for his ruling Cambodian People’s Party (CPP) to win all 125 seats in parliament in the country’s July 2018 general election. Hun Sen has been in power since 1985.

The attack on Sin Bona came days after the chief of Sam Rainsy’s bodyguard detail, Pouk Chenda, was assaulted by two unknown men who beat him with an iron bar as he returned home from a market near the CNRP’s headquarters in Phnom Penh, leaving him with a serious head wound that required stitches.

The two incidents brought to a dozen the number of opposition members targeted in attacks that involved assailants assaulting victims from behind, typically while riding motorbikes, in the aftermath of Sam Rainsy’s August announcement. 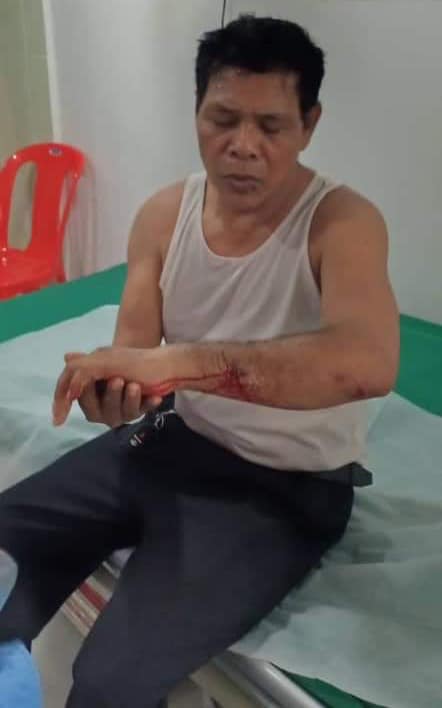 Sin Bona arrives at a hospital for treatment after being attacked by unknown assailants in Phnom Penh, Sept. 25, 2019. Credit: Bona Sophea

On Tuesday, National Police spokesman General Chhay Kim Khouen declined to discuss police investigations into the 12 attacks, but said the cases are ongoing.

“I can’t say anything about the investigation results while they are being processed,” he said.

But Seoung Sen Karona, a spokesman for local human rights group Adhoc, said he had yet to see any investigation of the cases and warned that the reputation of the police and the government will be tarnished if the assailants are not brought to justice.

“The police’s actions show a double standard,” he said.

“We have observed that the police rarely offer justice in cases that involve the CNRP.”