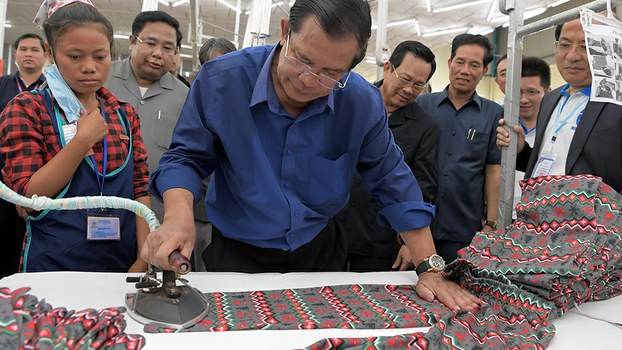 Cambodia “must show real, credible improvement” on human and labor rights if it hopes to avoid losing preferential trade status, according to the European Union, drawing condemnation from a government spokesman who suggested that Phnom Penh has no intention to comply.

The EU statement came at the end of a June 3-10 fact-finding mission, sent to Cambodia as part of a six-month monitoring period ending in mid-August to determine whether the country’s exports should continue to enjoy tax-free entry into the European market under the Everything But Arms (EBA) scheme.

The decision was prompted by a November 2017 ruling by Cambodia’s Supreme Court to ban the Cambodia National Rescue Party (CNRP)—part of a wider crackdown by Prime Minister Hun Sen on the political opposition, NGOs, and the independent media that paved the way for his ruling Cambodian People’s Party (CPP) to win all 125 seats in parliament in the country’s July 2018 general election.

On Tuesday, the EU said that this month’s fact-finding mission investigated major issues of concern in Cambodia, including potential violations of political rights, freedom of expression and freedom of association, the right to organize and collective bargaining, and the dispossession of families caused by economic land concessions, particularly in the sugar sector.

During the visit, the EU delegation met with government authorities, international organizations, trade unions, business organizations, civil society, and the embassies of EU member states and third countries to gather evidence of violations and improvements on rights in Cambodia, the statement said.

“The mission noted steps reported by Cambodia towards improving compliance with international standards on freedom of association and collective bargaining, as well as in addressing a number of land disputes in relation to economic land concessions,” it said.

But the EU added that “Cambodia must show real, credible improvement on the issues of concern in order to avoid the withdrawal of EBA preferences,” and said it is committed to working with the government to address human and labor rights concerns in the country.

The EU plans to produce a report of its findings and conclusions at the end of the monitoring and evaluation period in mid-August, and Cambodia will have one month to respond to the report, the statement said.

“We have done nothing wrong, so I don’t think we need to do anything,” he said, adding that Cambodia’s government is reforming itself to “compete with free export markets … when the EBA is lifted.”

Sok Ey San said that the EU’s “intention” is to force Cambodia to release CNRP President Kem Sokha, who is currently under de facto house arrest for allegedly plotting to overthrow the government.

“They want the dead opposition party to be revived and join future elections,” he said.

“What do they think about Cambodian laws and the Supreme Court’s decision? Do they believe the court’s decision is a joke? Their requests cannot be honored.”

Soeng Senkarona, spokesman for local rights group Adhoc, told RFA that the government seems to have no intention to improve the situation of human rights and democracy in Cambodia.

“That is even more worrisome [than the prospect of losing EBA status],” he said, urging the government to work with the EU to maintain trade preferences.

Cambodia accounted for more than 18 percent of all imports into the EU market under EBA preferences in 2018, making it the second largest beneficiary of the trade scheme for developing nations.

According to the EU, imports from Cambodia totaled 5.3 billion euros (U.S. $6 billion) in 2018, with more than 95 percent taking advantage of EBA preferences. Some three-quarters of those imports came from Cambodia’s critically important textile sector.

Meanwhile, Cambodia’s Interior Minister Sar Kheng called on CPP officials and authorities at the local level to “foster freedom of expression,” even in areas where constituents are mostly supporters of the CNRP.

Speaking at a ceremony in Phnom Penh on Thursday, he said that criticism can play a useful part in helping the nation reform for the better.

“These days, people are speaking out more, so we should organize more public forums to listen to the recommendations of our constituents and try to resolve their requests,” he said.

“We’d do better to listen to critical comments than flattering ones.”

But activists told RFA they aren’t convinced that Sar Kheng’s recommendations will be implemented at the local level because of partisan politics.

Land activist Chan Puthsak said that villagers who ask local authorities for help in land disputes are regularly turned away by officials who say it is “beyond their ability” to resolve them.

“We hope that the local authorities will implement Sar Kheng’s order—if they can’t implement it 100 percent, then at least 60-70 percent would be a big improvement,” he added.

Am Sam Ath, deputy director of monitoring and protection at Licadho, said local authorities can only implement Sar Kheng’s recommendations if they end discrimination based on political affiliations.

“Political discrimination is the cause of many issues in Cambodia,” he said.