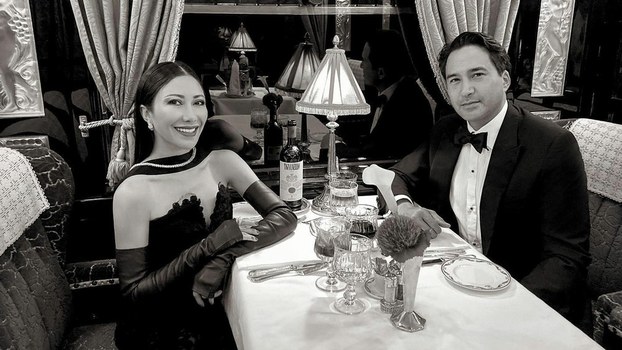 Hun Chantha, niece of Cambodian Prime Minister Hun Sen, and her husband Gerald Dupuis, a Belgian-Cambodian investment banker and heir, having dinner aboard the Orient Express.

Hun Chantha's Instagram account makes her life look like a non-stop fashion shoot. One day the niece of Cambodia's prime minister is striding across New York's Brooklyn Bridge in moody shades and hot pants. Next we see her in a beret, posing beside her banker husband in Venice. Then the photogenic couple are seen dressed for dinner aboard the Orient Express.

The daughter of Prime Minister Hun Sen’s elder brother has been pictured sipping cocktails with Hollywood star Lindsay Lohan. She's been photographed on a train with the editor-in-chief of British Vogue. And she's been welcomed into the arms of London high society, where she lives in a $5 million apartment and attends charity galas.

Chantha moved to London about a decade ago after divorcing Dy Vichea, today a senior figure in the Cambodian state security apparatus. She settled down with Gerald Dupuis, a Belgian-Cambodian investment banker, heir to a catering empire with business ties to the Hun family.

They set themselves up in plush surroundings. In September 2011, Chantha and Dupuis bought a £3.95 million ($5.18 million) apartment spread over the top two floors of a 19th Century townhouse across the street from the Zambian High Commission and one minute’s walk from London’s famous Hyde Park. Two and a half years later they would snap up the basement flat in the same building for just shy of £1 million ($1.3 million). That Chantha owns London real estate was first reported by Reuters in October.

It proved the perfect place to start re-writing her own story: transforming herself from autocrat’s niece to London socialite, rubbing shoulders with the wealthy and politically influential in the English capital.

She's made her mark at charity events -- albeit the kind where it helps to have a hefty wallet to gain entry. In the spring of 2015, Chantha and her husband fronted the cash for a lunch at exclusive London club 5 Hertford Street with British members of parliament that led to the politicians founding the Westminster Autism Commission. The event was organized by Tanja Gullestrup, daughter of Danish shipping magnate Per Gullestrup and founder of The Giving Tree, an autism awareness charity.

Chantha's generosity has been rewarded with invitations to a string of high-class charity balls and galas where Champagne flows freely and the great and good of London’s chattering classes mingle in fancy dress.

In June 2017, she was back at 5 Hertford Street, sharing a table with "Mean Girls" star Lindsay Lohan. The club – once dubbed London’s “most secretive” – regularly hosts royalty and billionaires, as well as anyone else that can afford its reported £1,800 ($2,361) annual membership fees. But Chantha and Dupuis' brushes with celebrity have not been without problems.

In early 2012, the couple sued Hollywood star Rick Yune in a dispute over luxurious handbags. Yune was in "Fast and the Furious," and played James Bond’s North Korean nemesis in "Die Another Day." 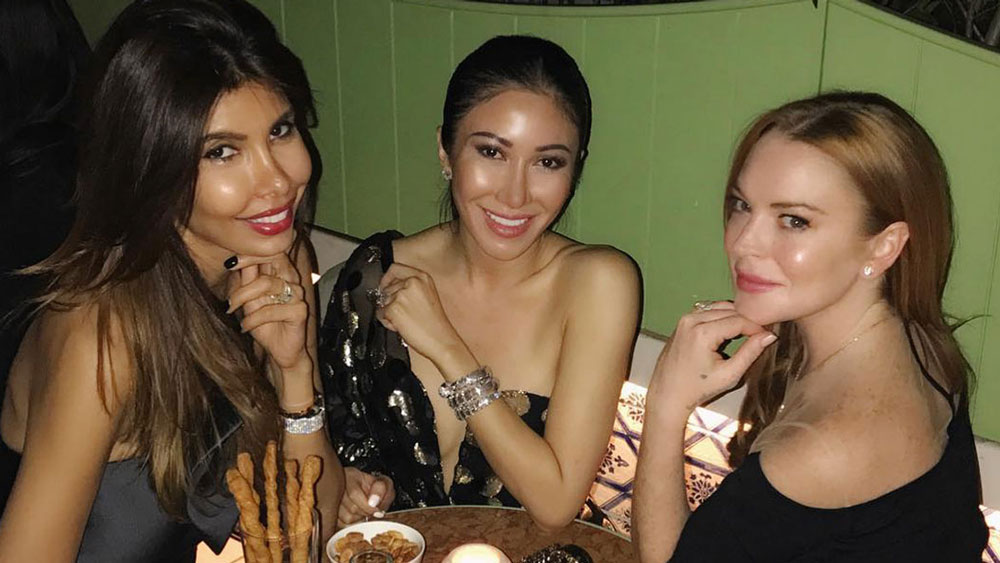 Celebrity gossip website TMZ reported that Yune stood accused of swindling “a husband and wife duo from London” out of $198,000, allegedly having failed to deliver eight Hermes Birkin handbags in return for the hefty sum. Curiously, TMZ failed to mention that that one of the two plaintiffs was the niece of Cambodia's prime minister.

The Birkin is a serious status symbol among international glitterati. Customers sign up in droves to years-long waiting lists just to get the opportunity to drop an average of $60,000 on a single bag.

According to her own lawyers’ filings with a Los Angeles county court, she agreed with Yune to first buy eight of them from him for a total of $197,800. The following month she agreed to purchase a further two for $95,000.

No party to the case disputes that in late October Chantha wired Yune $198,000 for the first eight bags. Neither do they dispute that in December 2011, Yune met with a representative of Chantha in Dubai to hand over all 10 bags.

What Chantha and Dupuis did argue was that while Yune had allegedly promised the bags would be authentic and authenticated, no such authentication was provided.

For his part, Yune counter-sued, noting in legal filings that Chantha “is a direct descendent of the Khmer Rouge regime” – her uncle, Prime Minister Hun Sen, was a Khmer Rouge commander before defecting in 1977.

Yune’s lawyers claimed that Chantha and her husband were swindling him out of the $95,000 allegedly still owed for the remaining two handbags. They also alleged that the couple attempted to have Yune arrested by the police and defamed him by painting his actions as criminal to the news media. The truth of who wronged whom and how may never be clear.

In March 2015, Chantha and Dupuis dropped their case before a judge had a chance to rule on it. Neither Yune nor his attorney in the case responded to requests for comment. 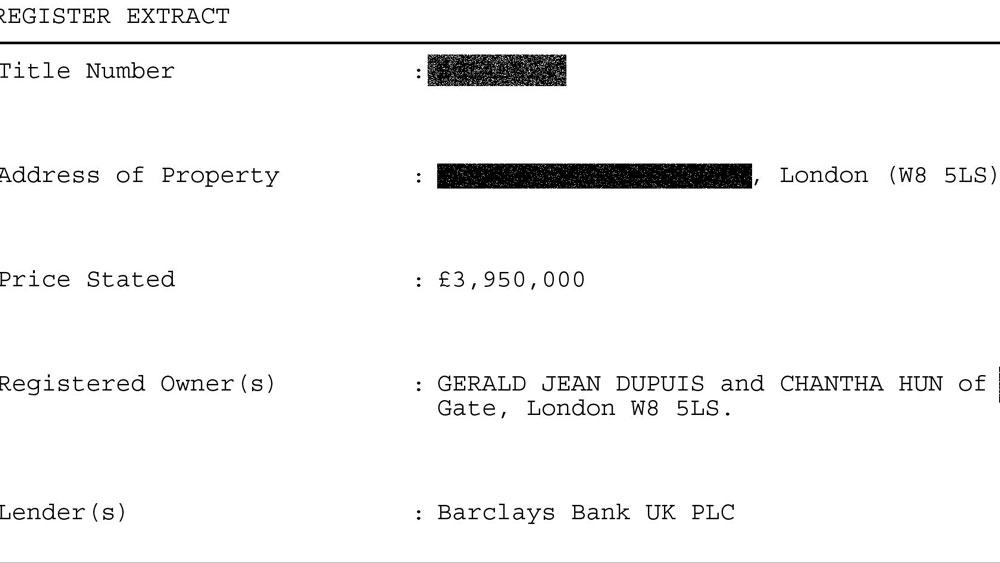 In the years since then, Chantha has been carefully curating her image on Instagram and accruing friends in London less likely to mention the more troublesome aspects of her family's heritage.

It is unclear whether Chantha was accompanied by her husband to the lunch. If she was, however, he and Carr might have had something to talk about: they were both clients of the same failed tax avoidance scheme, dubbed Rushmore.

In 2012, Carr was pilloried in the British press for his involvement in Rushmore. The scheme attempted to save high-worth individuals millions by routing their earnings through a complex sequence of charities and offshore shell companies.

The scheme was shut down by the UK tax authorities before a single penny of the hundreds of millions of pounds pumped into it were successfully sheltered. A subsequent report by the Charity Commission of England and Wales highlighted serious failings in the scheme.

The same report named Romangate Limited, a British company, as a key component of the scheme. Both Carr and Dupuis were directors of Romangate.

Nevertheless, Chantha still revels in showcasing her lavish lifestyle to her 52,000 followers on Instagram. She has taken to posting portraits of her and her family taken by professional fashion photographers. The photographers appear to follow Chantha and Dupuis, snapping them at luxury rural retreats, in New York and riding aboard the Orient Express.

In her Instagram feed, Chantha has selfies with Hollywood star Goldie Hawn and pop singer Boy George. There are also formal pictures from December 2016 at the Royal Palace in Phnom Penh when the family met Cambodian King Norodom Sihamoni.

Chantha and Dupuis did not respond to a detailed request for comment. However, the hobnobbing with celebrities and high-definition documentation of their ritzy existence fits a pattern. According to “Moneyland” author Oliver Bullough, second generation members of ruling elites in autocratic countries often ape celebrity culture.

“It’s not uncommon for these klepto-brats to become Instagram stars,” Bullough said. “They think of it like a cargo cult, ‘If I take all these pictures and the photographers follow me around, then I will become famous.’ Not realizing the reason that photographers follow [celebrities] around is because they're already famous.”

Associate professor of Diplomacy and World Affairs at Occidental College in Los Angeles, Sophal Ear, painted the attempts at reputation laundering as futile.

“She is a part of the original sin, which is the Hun family sin,” Ear said. “She can’t escape from that.”

Comments against Chantha Hun are made by jealous people. Chantha is beautiful, educated and smart. Her succes she earned it herself by dint of hard works. Those who are not happy with that can start working as hard as they can and see if they'll come to the same result.

Hun Sen owes China billions of dollars, money he supposedly use to help Cambodia but instead ended up in his family's bank accounts.

Dictatorship is implementing step by step into Cambodia. Cambodians are not able to defend themseves. Please help them !!!

This is a real success story of a poor young girl from a poor country to become a rich among the richest of the world.Combodian people must thank Chantha Hun to make their country known in all over the world. Hurray, hurray for Chantha !