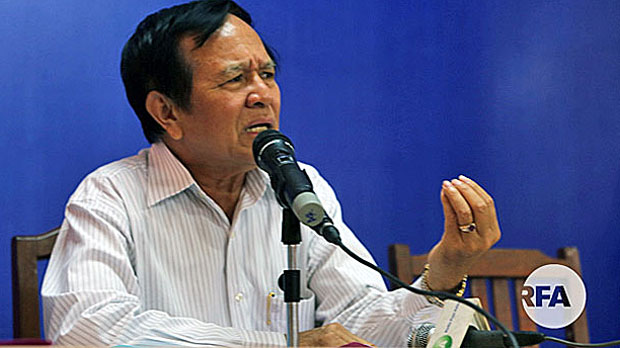 Kem Sokha’s appearance in court will mark the first time a hearing has been held for him in the capital and away from the prison in a remote part of the country where he has been confined for what the government has called concerns over “security” since being jailed, his lawyer said on Wednesday.

“I see this as a good development, and I am hopeful that he will be released,” defense attorney Hem Socheat told RFA’s Khmer Service.

“Now that the court is allowing him to come to Phnom Penh for this hearing, there seem to be no further concerns over ‘safety and security,’ and there is therefore no reason to continue his provisional detention before his trial,” he said.

If no decision on granting bail is reached on Thursday, Kem Sokha and his defense team will ask the court to allow him to remain in Phnom Penh instead of being returned to Trapeang Prison in the faraway province of Tbong Khmum, Hem Socheat said.

Cambodia’s CPP-dominated Supreme Court ruled on Nov. 16 that the CNRP be dissolved for its part in the alleged plot, essentially eliminating Hun Sen’s competition ahead of a national election scheduled for July 2018.

Speaking to RFA on Wednesday from Paris where he now lives in exile, former CNRP President Sam Rainsy said that Cambodia’s government must free not only Kem Sokha, but also all other prisoners held for opposing CPP rule.

“The government has to allow Cambodians to exercise their right to choose their own leaders through democratic means,” Sam Rainsy said.

“Hun Sen is behind a lot of crimes, and he is very worried that if he ever loses power, and our country’s judicial system is restored, he will be prosecuted by an independent court,” he said.

no one intended to overthrow this embattled
government. it just behaved like Pol Pot,
It fears it's own shadow.

Accused others of treason was absolutely
ridiculous. I think just look after Khmer-
nation's interests. It may be treason to
Viet but not to Khmer nation in my view.
Thank