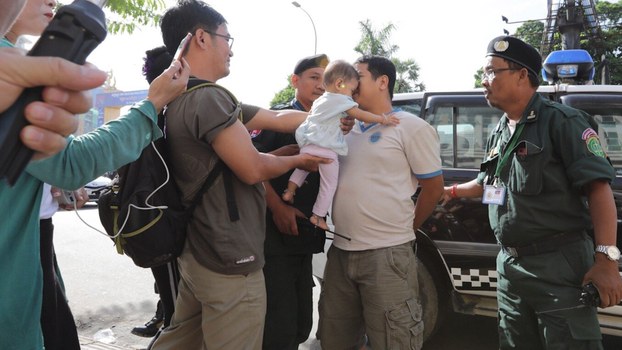 CNRP activist Kong Raiya kisses his daughter as he is led to court for questioning in Phnom Penh, July 11, 2019.

More than 20 activists from the opposition Cambodia National Rescue Party (CNRP) who voiced support for the return of party chief Sam Rainsy from exile remain in detention one week after Prime Minister Hun Sen ordered them released on bail, a lawyer said Wednesday.

At least 88 CNRP activists—according to RFA’s count—had been arrested since the party announced in August Sam Rainsy’s intention to return to Cambodia on Nov. 9 to lead a restoration of democracy through nonviolent protests, which Hun Sen’s government had labeled part of a “coup attempt.”

Sam Sokong, a lawyer for the activists, told RFA’s Khmer Service that 16 of his clients remain in detention, in addition to at least four others represented by other attorneys. The subjects of cases forwarded to an appeals court or that went to trial are not eligible for release, he said, while those of cases that judges don’t view as politically motivated also will not be freed.

“The lawyers have already requested that judges release them on bail,” Sam Sokong said, adding that they also plan to ask King Norodom Sihamoni to grant amnesty to those already convicted.

Sam Rainsy was denied entry to Thailand, from where he hoped to cross the border into Cambodia, and was forced to return to France over the weekend after meeting with CNRP officials and lawmakers in Malaysia and Indonesia to discuss next steps.

His attempt to repatriate came days before Cambodia was informed that it had failed to make the necessary improvements to its human rights record required by the European Union to continue to qualify for tariff-free entry into the bloc’s markets under the Everything But Arms (EBA) program for developing nations—improvements that included the release of all political prisoners.

A day after the EU’s preliminary Nov. 12 report gave Cambodia one month to respond to its findings from an investigation into the country’s rights situation, Hun Sen ordered the release of more than 70 CNRP activists who had been arrested in connection with Sam Rainsy’s plan to return, although the prime minister maintains that the decision had nothing to do with maintaining EBA status.

So far, 75 activists from the CNRP—which was dissolved by the Supreme Court in November 2017 for its role in an alleged plot to topple the government—have been confirmed released, and Sam Sokong’s comments suggest that the number arrested since August is higher than the 88 RFA’s Khmer Service has documented.

Kia Sisokunthi, the wife of a CNRP activist from the seat of Preah Sihanouk province named Mai Hongsreang who remains in detention, told RFA she is disappointed that the government has not released her husband.

She said that she had traveled to Phnom Penh five days ago, following Hun Sen’s announcement, but was only able to meet Mai Hongsreang on Tuesday at his prison, where he is being held in an overcrowded cell with 16 other people.

“I urge the government to release my husband so he can reunite with his children,” she said.

“Why is the government continuing to keep him when [Hun Sen] already ordered him released?”

Speaking to RFA on Wednesday, government spokesperson Phay Siphan said that those arrested since August include people from two groups: “hardliners” who will not be forgiven and others who were “cheated” by the CNRP and have been freed on bail.

“Any people arrested for reasons involving freedom of expression should be released,” he said.

Meanwhile Cambodian migrant workers in Thailand told RFA they are returning to their jobs after having gathered at the border to Cambodia to accompany Sam Rainsy home, but said they will be available to join him when he is able to enter the country.

Chhorn Sokhoeun, a construction worker, said he still has hope and continues to support Sam Rainsy’s plan to repatriate.

“Even though Sam Rainsy could not make it to Cambodia on Nov. 9, we remain firm in our support for him because we know the situation there, and Hun Sen is pressuring us in all aspects of life,” he said.

Another worker, Lon Peiseth, said it was not Sam Rainsy’s fault that he was unable to return on Nov. 9.

“He was prevented from returning home, so we don’t blame him and will be ready to accompany him [when he is able],” he said.