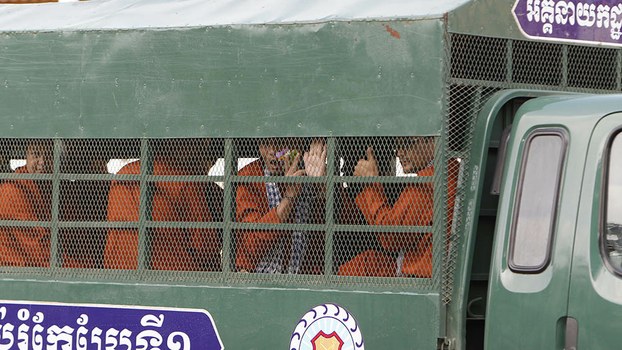 Former members of the Cambodia National Rescue Party arrive at the Court of Appeal in Phnom Penh, May 10, 2018.

“I then sent another request to the prison warden, and the prison warden told me in reply that he didn’t dare to decide this matter. They asked me to request permission from the General Directorate. That is why I don’t understand what they want exactly,” said Ou Chanrath.

RFA’s calls to the warden’s office and to the spokesman for General Directorate of Prisons, Nuth Savana, went unanswered on Monday.

Head human rights investigator Am Sam Ath of the rights group LICADHO told RFA there were no clauses in the Cambodian Prison Law that permit denying visits for political reasons. The law allows family or friends to visit prisoners provided they request permission in advance.

“If they don’t allow for such visits despite such notice or request, this will affect the rights of the accused, or those convicted who are entitled to communicate with their family members, relatives or friends” he said.

Among the 15 the lawmakers tried to visit were Meach Sovannara, the former director of the CNRP’s information department, and former lawmaker Um Sam An.

Meach Sovannara is among 11 CNRP members who have been incarcerated since 2014 for their alleged role in a July 15, 2014 demonstration held by the party against government manipulation of the general election a year earlier, and restrictions on peaceful assembly, that turned violent when police tried to forcibly remove protesters. In July 2015, they received sentences of from seven to 20 years in prison. The 11 lost their final appeal last month.

Um Sam An was handed a two-and-a half year sentence in October 2016 for “inciting discrimination” and “inciting social instability” for posts on the lawmaker’s Facebook page accusing the ruling party of failing to stop land encroachment by Vietnam and using improper maps to demarcate the border between the two former colonies of France.

Cambodia’s Supreme Court dissolved the CNRP in November for its alleged role in former president Kem Sokha’s alleged plot to topple the government. Kem Sokha, has been held in pre-trial detention since September on charges of “treason.”

The prison visit dispute comes amid a crackdown by Prime Minister Hun Sen on the country’s political opposition, NGOs and the independent media—widely seen as part of a bid to ensure his ruling Cambodian People’s Party (CPP) remains in power following a general election on July 29.

Several CNRP officials and activists have fled Cambodia since the party was banned and are currently living in self-imposed exile to avoid facing cases widely seen as politically motivated and tried in a court system beholden to the CPP.