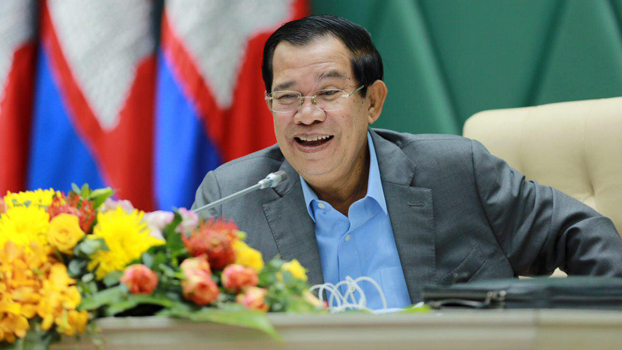 Cambodia's Prime Minister Hun Sen on Wednesday reiterated his stance that the country would not give in to the European Union’s recommendations on human rights and governance simply to preserve the country’s status under the trade bloc’s Everything But Arms (EBA) program.

The EU is currently considering withdrawing Cambodia from the EBA—which gives developing nations tariff-free access to the European markets for all products except arms.

In a Nov. 12 preliminary report, the EU warned Cambodia that it has not taken enough measures to prevent a loss of its special trade privileges, noting the country’s further deterioration of civil, political, labor, social, and cultural rights since the launch of a review process in February.

Cambodia has until Thursday to respond to the report, at which point the EU will finalize it and make a decision in February 2020 on whether to withdraw EBA status.

Speaking at a graduation ceremony in Phnom Penh Wednesday, Hun Sen said he is not interested in Thursday’s deadline, and cannot concede 100 percent effort on the issue.

The prime minister said that should the EU rescind EBA status from Cambodia it would not only affect Cambodia negatively, but would also take away EU leverage in Phnom Penh.

“What [the EBA] has done for us will be wasted. [The EU’s] leverage will be reduced. It means [they] will also help in killing the opposition,” he said.

Rong Chhun, President of the Cambodian Confederation of Unions, told RFA’s Khmer Service that Hun Sen’s comment is showing that he is worried about losing EBA status.

Rong Chhun urged Hun Sen to work the issues out with the EU to make sure that Cambodia will continue to receive EBA benefits for the sake of the people.

“If we lose EBA, [Hun Sen] will continue to receive more international sanctions that will lead Cambodia to social and economic crisis,” said Rong Chhun.

Opposition leader Sam Rainsy, who is visiting the U.S., told RFA that if Hun Sen’s government ignores the EU recommendations through February, workers, and the people in general, would protest against the Cambodian government.

The acting president of the CNRP said, “Hun Sen does not want to change. The EU wants Hun Sen to behave for his own good and for the sake of Cambodia. But now Hun Sen refuses [to implement the recommendations], which will lead to international sanctions.”

“We all must protest that we all need freedom [if we want] to avoid sanctions, if we keep Hun Sen’s regime there will no freedom and no employment,” he added.

He added that the sanctions will also cause Cambodia’s reputation on the world stage to deteriorate.

“Now our leader is a criminal and we are losing our face, we must revolt to topple this regime,” he said.

Sam Rainsy told RFA that he met officials at the State Department and several congressmen Wednesday who are watching the situation in Cambodia closely.

He plans on Thursday include meeting with representatives of the National Democratic Institute (NDI) and the International Republican Institute (IRI).

Hun Sen don't care EBA or Cambodians because he want power and rich. Cambodians are the victim of Undemocratic, and human rights abuse. Cambodia economy will go down or stagnant. EU, US and else consumers won't buy Cambodia products. Samsung will close its 30 year old factories and move to Vietnam not Cambodia. Why?

For those who have taken an active interest on the dealings of the CPP under Hun Sen embargoes should have been placed on Cambodia years ago. Members of his dictatorship government have vast tracts of real estate in Australia. How do they amass this wealth if their parliamentary salaries are so low? His cronies in Australia stand over Cambodian Australians. On Hun Sens last visit to Australia he threatened Australian citizens with violence which no legal action was taken. He has threatened Australian M.P.s with death if they set foot in Cambodia again. The LNP allowed members of the CPP to view democracy via the Australian parliament and then signed a deal worth millions to take refugees from Australia as part of the LNPs punitive measures to control refugees.Embargos must be put in place.

EU must now ignore aid and assistance to Cambodia. It's very easy to do.