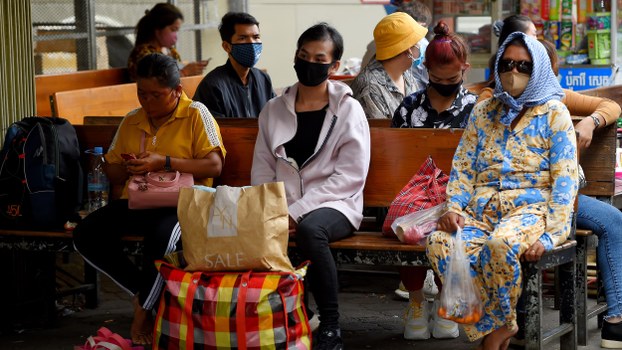 People wearing face masks as a preventive measure against COVID-19 sit at a bus station in Phnom Penh, March 18, 2020.

Cambodia’s government on Thursday announced it is temporarily closing the country’s checkpoints along its border with Vietnam as part of a bid to stem the spread of the novel coronavirus disease COVID-19.

In a letter to the Vietnamese Embassy in Phnom Penh, Cambodia’s Foreign Ministry said the shutdown would go into effect on Friday, adding that it is necessary to isolate people from one another on either side of the border to prevent additional infections.

The measure will not apply to Vietnamese and Cambodian nationals who hold diplomatic and official passports, the letter said, adding that local authorities on both sides of the border should work together to ensure that cross-border freight continues unobstructed.

The ministry said it will request assistance from Vietnamese authorities to facilitate the repatriation of any Cambodian citizen who is currently under quarantine in Vietnam.

Cambodia’s decision to close the border was ordered in a video clip disseminated to local officials by Prime Minister Hun Sen, who appeared to be acting in response to Vietnam’s announcement that it was closing its borders to Cambodia for 30 days beginning Thursday without informing Phnom Penh ahead of time.

“[Vietnam] shut down unilaterally,” Hun Sen says in the video. “We do not seek revenge against Vietnam, but we understand that the Vietnamese people do not want to be prevented from returning to Vietnam.”

“Vietnamese nationals [suspected to be infected] cannot return to Vietnam because they are required to be quarantined for a 14-day period, but they will be staying [in Cambodia] illegally if they are then refused the right to return to Vietnam [because of the border closure].”

Hun Sen called on authorities to vigilantly guard the borders and enforce the ban on cross-border transit “while Vietnam is implementing its ban.”

The Vietnamese Embassy in Phnom Penh did not immediately respond to requests by RFA’s Khmer Service for comment on Cambodia’s announcement.

Social and political analyst Meas Nee told RFA that the actions by Vietnam’s government indicate that its leadership is committed to protecting the health of its people, and said Cambodia has little to gain from reciprocal measures.

“If we also close the border and trade, our Cambodian people will be the victims because we produce little,” he said.

“The response of the Cambodian government is disproportionate, because if we react without careful consideration and if we protest against Vietnam by shutting down all trade, Cambodia will suffer by losing everything we import from them.”

Amid the closures, farmers in Cambodia’s northeastern provinces are complaining that the price of agricultural products has seen a steep decline, causing many to default on the loans they took out to cultivate their fields, and leading lenders to confiscate their property.

Many have called for Cambodia’ government to purchase their crops at subsidized prices to insulate them against financial ruin during the COVID-19 outbreak.

Speaking to RFA, ruling Cambodian People’s Party (CPP) spokesman Sok Eysan assured farmers that the government is taking measures to protect them amid the crisis.

“I think the government has spent tens of millions of dollars to buy such crops as rice and agricultural goods from the farmers, and we will not be charging the Cambodian Rice Association taxes on exports,” he said. 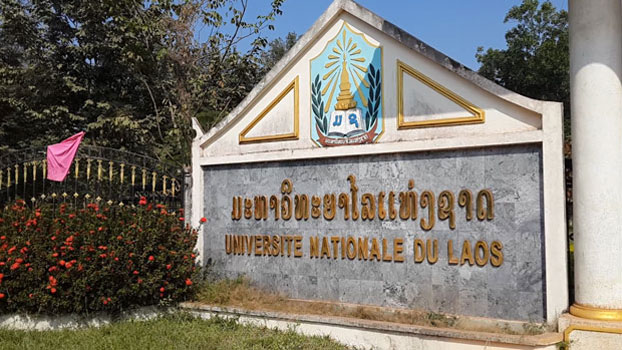 A photo shows the National University of Laos in the capital Vientiane, 2019. RFA

Meanwhile, neighboring Laos, which earlier this week shuttered all small checkpoints along its borders with Cambodia and Vietnam to stop the spread of COVID-19, issued an order Thursday closing all of the country’s schools—including high schools and universities—in a bid to prevent an outbreak.

“According to the order, the closures [of all schools] start today and last until April 21,” an official with the Ministry of Education and Sports told RFA’s Lao Service, speaking on condition of anonymity.

“The reason is because of the COVID-19 outbreak and the prime minister has also ordered no large gatherings.”

The order to close followed earlier ones shutting down primary schools, kindergartens, and preschools.

Laos has yet to report a confirmed case of COVID-19, although authorities in Thailand warned Tuesday that a group of Thai nationals that recently visited Laos on a day trip had tested positive for the coronavirus.

Parents, students, and teachers on Thursday largely agreed with their government’s decision to shutter schools.

“The closures are good for the protection of children, although they will miss the opportunity to learn directly with teachers,” an employee at a private school in the capital Vientiane said.

“However, we’ll send homework to students so they can study with their parents.”

A high school student in Vientiane also welcomed the move, “as long as all students can continue to learn.”

“No one should be left behind,” he said.

A parent in Savannakhet province expressed concern over the ability of those living in poverty to receive care in the midst of an outbreak.

“To close the schools is the best way to go, because if not and if there is an outbreak, the poor like us will all die,” she said.

Nearly all parts of the world had known that the communist Vietnam party is the most ignorant among humanity because they don't even know and how to classify between deadly COVID-19 virus and genocide.
In the 1970's they were the ones who trained the Khmer Rouge cadres and five years later these monsters committed mass killing nearly three million Cambodian peoples. Today, the communist Vietnam party's genocidal policy is going to wipe out Dega people in the Central Highlands in Vietnam while they continuing mingling with Chines where coronavirus originated.