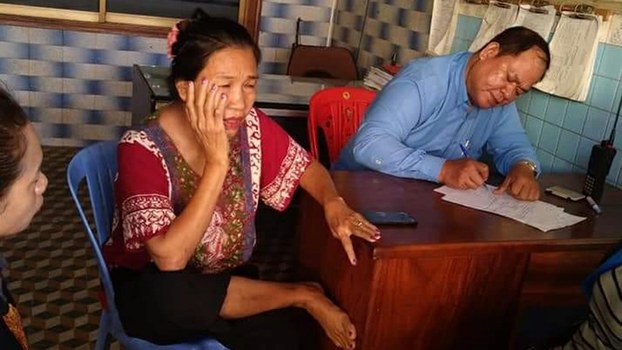 A former elected official from the Cambodia National Rescue Party (CNRP) was beaten unconscious by unknown assailants in Cambodia’s capital on Friday, bringing to 13 the number of opposition members assaulted since the party’s leader Sam Rainsy announced plans to return home from exile in August.

The assault on Tep Chansokheya, who served as the councilor of O'Russey III commune in Phnom Penh’s 7 Makara district until Cambodia’s Supreme Court disbanded the CNRP in November 2017 for its role in an alleged plot of treason, came as the government prepared to respond to a report from the European Union which blasted its rights record and warned it could lose tariff-free access to the bloc.

Speaking to RFA’s Khmer Service after the attack, Tep Chansokheya, a 51-year-old widow and mother of two, said she had been speaking with another resident of the area near the O'Russey III commune office on Friday morning when she was set upon by two men, who immediately escaped on a motorbike after beating her and knocking her out.

“I was standing with a neighbor for about two minutes, when suddenly an unidentified man hit me on the back of my head,” she said.

“I saw the person—he was wearing a black safety mask and an all-black uniform, and he appeared to be 40-45 years old.”

Tep Chansokheya said she filed a complaint with the commune police station immediately after the attack, but officers waited until later in the day to interview her and issue a report.

“I think this stems from a political issue, not a personal conflict, because I … never have had an argument with anyone,” she said.

“[Prime Minister Hun Sen’s government] robbed me of my elected position and they must find justice for me.”

The ban on the political opposition in 2017 forced CNRP officials to relinquish their elected positions and, along with a wider crackdown by Hun Sen on NGOs and the independent media, paved the way for his ruling Cambodian People’s Party (CPP) to win all 125 seats in parliament in the country’s July 2018 general election. Hun Sen has been in power since 1985.

According to Tep Chansokheya, she asked authorities to review camera footage from a neighbor’s home to try to identify her assailants, “but my request was rejected.”

O’Russey III commune police chief Nhem Amrin told RFA that authorities began an investigation to find the suspects in the attack immediately after receiving a complaint from Tep Chansokheya, but had yet to find any clues.

“The authorities are looking for the perpetrators, but haven’t found them yet,” he said.

“We are trying to locate a camera in the area to review footage of the incident, but the ones we have found did not capture what happened. If you want to know more, please speak with my boss because he knows the case clearly,” he added, referring to 7 Makara district deputy police chief Kreth Sekherin.

National Police Commissariat spokesman Chhay Kimkhoeun told RFA that authorities will take action according to the law when members of the public are targeted by violence, regardless of their political affiliation.

“When something happens, people always say that it is a political issue, but I don’t agree with that accusation, because we have yet to find the truth,” he said, adding that the investigation into Tep Chansokheya’s case is ongoing.

Meanwhile, a dozen other members of the CNRP are still awaiting justice months after they were attacked by unknown assailants following Sam Rainsy’s announcement of plans to return home.

In August, Sam Rainsy, the acting president of the CNRP, said he would return home on Nov. 9 to lead a restoration of democracy in the country through peaceful protests, but was blocked from doing so and forced to return to Paris, where he has lived since 2015 to avoid a string of charges and convictions he says are politically motivated.

Following the announcement, 12 CNRP activists and supporters were targeted in attacks over the span of a few weeks in what opposition officials said was a campaign orchestrated by the CPP to sow fear within the community.

The attack on Tep Chansokheya brings to 13 the number of CNRP members who have been assaulted since the announcement and police have yet to arrest any suspects in the cases.

Soeung Senkaruna, a spokesman for local rights group Adhoc, expressed regret over the violence targeting members of the opposition, and suggested authorities are not working hard enough to find the offenders and bring them to justice.

“If there are no credible measures taken and the Cambodian authorities are not properly implementing the law, we believe that the government will be accused of looking the other way when opposition activists are assaulted,” he said.

Response to EU on rights

Friday’s assault came as Interior Minister Sar Kheng told reporters that the government is preparing its response to a Nov. 12 preliminary report in which the EU warned Cambodia that it has not taken enough measures to prevent a loss of its special trade privileges, noting the country’s further deterioration of civil, political, labor, social, and cultural rights since the launch of a review process in February.

The European Commission (EC), the EU’s executive branch, launched the investigation into Cambodia’s rights record to determine whether it would withdraw the country’s Everything But Arms (EBA) status, which gives developing nations tariff-free access to the bloc’s markets for all products except arms and ammunition.

The EU had given Cambodia one month to respond to the preliminary report, at which point the EC will finalize it and make a decision in February 2020 on whether to withdraw EBA status.

“We will respond and at the latest [send the reports over] by Dec. 12,” Sar Kheng said, adding that relevant ministries have already submitted their reports to the Ministry of Foreign Affairs, which will compile them and present them to the EU.

“We will reveal the truth and nothing but the truth, because we cannot lie to them. We will speak the truth.”

Khun Tharo, a program coordinator at the Center for Alliance of Labor and Human Rights, said that some ministries have prepared responses to the EU that attempt to paint a rosy picture of the rights situation in their portfolio, but that they have demonstrated no real commitment to improving the country’s record.

“I don’t think the EU will believe the government’s response,” especially on the dissolution of the CNRP, which the bloc specifically mentioned in its preliminary response as an example of how political rights have been curtailed in the country.

“If the government only provides reports but makes no commitments, the EU will not trust that changes have been made.”

Social commentator Thida Khus told RFA she doubts that the government has any intention of improving the current rights situation, noting that Hun Sen has refused to bow down to the EU in exchange for preserving EBA status.

“Hun Sen has said that he won’t give up the country’s sovereignty to the EU, so that means he has no plans [to follow the EU’s recommendations]. If he restores democracy it will affect his power in the elections. He wants only one [viable] party.”