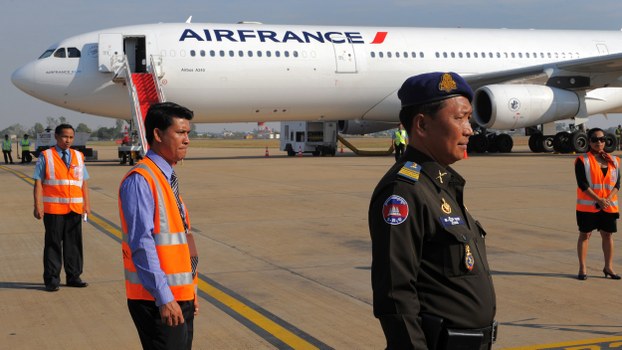 A Cambodian military policeman stands guard in front of an aircraft at Phnom Penh International Airport, in a file photo.

Cambodia’s civil aviation authority has issued a directive banning commercial airlines that serve the country from boarding acting opposition president Sam Rainsy, who has vowed to return home from exile next week, warning they will face “serious consequences” as accomplices to a coup attempt.

Chea Oun, the secretary of state at the State Secretariat of Civil Aviation, told RFA’s Khmer Service Friday that the ban on the Cambodia National Rescue Party (CNRP) chief also extended to seven other CNRP officials, as well as his wife, who were charged along with Sam Rainsy in September with “attempting to stage a coup” in connection with his planned return on Nov. 9.

“Airlines are not allowed to board them,” he said.

“No airline should be allowed to board a convict, but if they do it, it means they are participating in a plot and the companies can be prosecuted as well.”

In addition to facing charges for “plotting a coup,” Sam Rainsy has also been hit with a string of other allegations and convictions that he says are politically motivated.

While he has said he will use his return from self-imposed exile to spearhead a “restoration of democracy” in Cambodia through peaceful protest, Prime Minister Hun Sen has vowed to arrest the opposition leader as soon as he steps foot inside the country.

Hun Sen issued a similar ban on airlines against ferrying Sam Rainsy in 2016, shortly after he fled Cambodia for self-imposed exile in Paris, France, but lifted it a year later, daring him to return to the country where “prison is waiting for you.”

Chea Oun said Friday that the new ban supersedes the most recent lifting of the ban on airlines carrying him to Cambodia.

During an interview with RFA in Washington, CNRP vice president Mu Sochua said the reversal of the lifting on the ban signals that Hun Sen fears Sam Rainsy will lead a successful challenge to his leadership.

“Hun Sen’s government is afraid of Sam Rainsy’s presence in Cambodia,” she said, adding that CNRP party members will continue to purchase flight tickets to the country.

“I want to ask Hun Sen, why doesn’t he arrest Sam Rainsy? Hun Sen is afraid of Sam Rainsy’s influence.”

Since Sam Rainsy left Cambodia, authorities arrested CNRP president Kem Sokha on charges of treason in September 2017 and the Supreme Court ruled to dissolve the party two months later for its role in an alleged plot to overthrow the government.

Sam Rainsy and other CNRP leaders have been urging supporters—particularly those among the migrant laborer community in Thailand—and members of the armed forces to join them on their return.

Hun Sen has been counteracting efforts by Sam Rainsy and other CNRP leaders to gather the support of the international community by seeking the cooperation of neighboring countries to ensure that their return will be prevented, and Laos has reportedly agreed to take “strict measures” against any opposition officials who attempt to enter Cambodia through its territory.

A Thai security official, speaking on condition of anonymity because he was not authorized to discuss the issue publicly, last weekend told RFA that Cambodia had forwarded warrants to the Thai government for Sam Rainsy, CNRP deputy president Mu Sochua, and six other party officials, with orders to arrest them if they arrive in Thailand for transit into Cambodia.

“But Thai authorities don’t want to get involved in [Cambodia’s] internal matter,” the official said, noting that authorities chose instead to blacklist Mu Sochua from entry into the country last week to assist in preparations for Sam Rainsy’s return.

Mu Sochua told RFA on Friday that she and other CNRP officials are “still in discussions” with the Thai government, parliament, and civil society groups, and holding talks with members of the international community, to determine how they could secure passage through the country “in a way that would bring honor to Thailand for being a supporter of human rights, freedom, and democracy.”

While in Washington, the former elected CNRP lawmaker said she will be meeting with members of the U.S. Congress to brief them on the situation.

“If there are rights violations or casualties when we return to Cambodia, the international community must be aware of it,” she said, adding that some “300 Cambodian-Americans and Cambodian-Europeans” plan to accompany them back home.

“It’s not about being brave or not, as Hun Sen has said. We are talking about our obligation, our task, and our right to return to Cambodia in order to find a solution for our nation.”

Mu Sochua said that Sam Rainsy and others plan to enter Cambodia “across the border,” although she did not provide details of the plan, and suggested that the party is also considering options by air and sea.

“This shows our willingness to respond to the needs of Cambodians who want to see a positive change through nonviolence,” she said.

On Thursday, Sam Rainsy said in a video posted to his Facebook account that he was ready to go to jail or die for the cause of restoring democracy in Cambodia, vowing to return home on Nov. 9 in the face of threats by “brutal dictator” Hun Sen.

He said that he will release detailed plans for his return on Nov. 6 “so that Cambodians—both in Thailand and Cambodia—can be fully informed on the time and places for meetings and what routes they should take.”

It will be another Killing Field.

World watch out. The Khmer-Rouge are back !